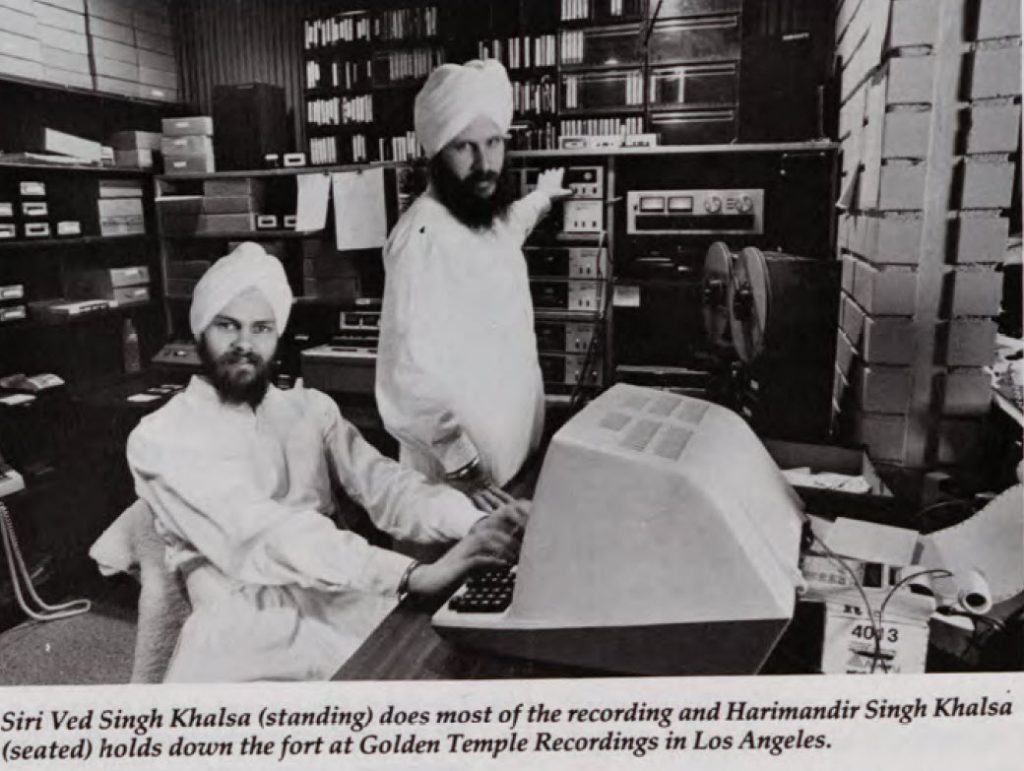 The article below was written by SIRI VED SINGH KHALSA and originally appeared in Bead #17, the  Summer 1986 Beads of Truth.

Before sharing this article, we’d like to take a moment to thank Siri Ved Singh. Siri Ved Singh’s work of tirelessly initially audio taping and then later video taping the live classes of Siri Singh Sahib, Yogi Bhajan, is the reason that we have the Library of Teachings today.  Before there was an internet, the only way for people who did not attend the Siri Singh Sahib, Yogi Bhajan’s classes in person to hear these teachings for themselves, was to purchase cassette tapes or VHS videos from Golden Temple Recordings. Even after the internet took shape, it still took years for people to transcribe these lectures and create the Library of Teachings site to house these beloved lectures.

The Library of Teachings is now home to thousands of video, audio and transcribed lectures that comprise the life long teachings of Yogi Bhajan. We are eternally grateful for Siri Ved’s years of service, travelling and attending most of the Siri Singh Sahib’s lectures, so that the gift of these teachings can now be available for all generations to come.

Back in the day, before being able to get music online through Spotify, Apple Music and sites like Spirit Voyage, Siri Ved Singh and Golden Temple Recordings was the go-to place to get inspirational music from early 3HO artists like Singh Kaur, Gurudass Singh, Livtar Singh, Guru Singh, Krishna Kaur and many more. Golden Temple Recordings is no longer open for business, but we are grateful to them for being there for our 3HO community for so many years.

Below Siri Ved Singh describes in his own words what it meant to him to participate in this incredible work.

When I started taping the Siri Singh Sahib’s classes in Los Angeles almost eleven years ago, I had no idea that what I was doing was anything more than a hobby. One thing led to another and today, not only do I sell lecture tapes, but our company, Golden Temple Recordings, has become the main source tor all types of recorded audio and video tapes relating to the 3HO and Sikh Dharma lifestyles.  Being able to supply people with something that is so beneficial and appreciated has been and continues to be a most rewarding experience.

I started out by selling Yogi Bhajan’s lecture tapes. And now music tapes have also become a major part of what I supply. There are three major areas of musical tapes I sell. These are: 1) Songs inspired by the 3HO/ Sikh Dharma lifestyle; 2) Meditation and mantra tapes; 3) Gurbani Kirtan. The first includes lyrics and tunes which reach into our American tradition and touch the heart and soul of our way of life. This area includes original poetry, translations of Sikh Scriptures, and various chants sung as songs. It includes a wealth of uniquely uplifting spiritual music, which goes hand in hand with the practices of Kundalini Yoga and Sikh Dharma, and which also stands as a bridge to higher consciousness.

The second area consists of those particular tapes which can be used as powerful tools for meditation. By meditation tapes I don’t mean the usual quiet, soft flute music, which we also sell, but tapes that use mantras and music to achieve a specific elevating effect and which follow the Siri Singh Sahib’s teachings as the master of the sound current.

Mantras are actually the basis of modern spiritual practice and are used in most modern and primitive religions. When practiced correctly, the repetitive sounds and rhythms can uplift, cleanse and direct the consciousness. Many mantras are derived from the vibrationally powerful Sanskrit language, which is the basis of western language, but a mantra can be in English or any other language as well.

The third area is Gurbani Kirtan, the traditional music of the Sikh Religion. This consists mainly of sacred Sikh scriptures from the Siri Guru Granth Sahib, which was written in ragas (or scales) to “deliver” its message. There are many different styles of kirtan. The main one we sell is the classical style, which has three hundred years of tradition behind it. It is usually played by Indian musicians (ragis). The shabads (songs) of Gurbani Kirtan are also effective as mantras and even the casual listener will find them very soothing and relaxing.

Over the past eight years, we have been fortunate to produce excellent stereo Gurbani Kirtan recordings of some of the top Indian groups which have toured through Los Angeles. We have been able to make use of modern technology to capture an age-old tradition.

The combination of modern and ancient technology is a particularly powerful example of how we can use our media for something constructive and uplifting. One development over the past few years is the widespread availability of auto-reverse tape players. These auto-reverse tape decks enable the use of the audio cassette for sleep listening and continuous background playback.

For the last several thousand years, many of the most powerful tools of the science of yoga have been kept secret. Just to be given a single mantra or one set of exercises, a disciple may have had to endure many years or even a lifetime of testing by his teacher.

Since Yogi Bhajan came to the (West) in 1968, he has freely shared an abundance of knowledge with us. His belief in the Sikh tradition of self-initiation has enabled us to bring together the old with the new, blending the ancient yogic science of mantra and sound current with our modern technology of sound reproduction by electronic and magnetic means.

These tapes of ours are not to be confused with the many subliminal tapes on the market. The tapes we produce work on the conscious and subconscious at the same time. The result is that one can consciously feel the effect from even casual listening and really feel the effect when combined with meditation techniques. One has a conscious awareness of what one is actually listening to because there is no hidden message.

Starting a business on faith can be quite an experience. I gained a sense of pioneering, of blazing new trails that will lead the way to the future.  We are part of a world that now needs the wealth of techniques we have to offer more than ever. Our challenge is to make sure that more than a small percentage of the world knows what we have exists. To do our part as a company, and as a group of people who want to make a difference in the world, we need to make sure we are ready to meet the challenge and serve that need. We can help shift the balance that can bring about a world that is in peace.