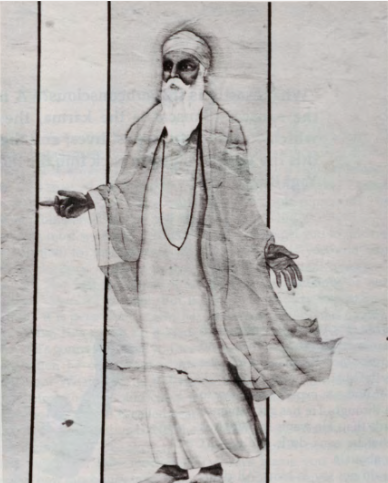 Guru Nanak spoke the Japji Sahib. It is the meditation for the soul. It is spoken in the language of a God – enlightened being. It is spoken in perfect Naad, that is perfect rhythm, meter and beat to permeate the recesses of the mind. This spoken word transcends our ordinary comprehension. It is spoken at a level that exists beyond time and space in absolute subtlety. The blessing of this Naad is that even though one may not understand the language, the words or their meaning, by simply listening to or speaking it, it has the power to affect one’s consciousness in an untold positive way. It will change your destiny just to listen to or speak these words.

Guru Nanak’s Jap Ji Sahib consists of thirty-eight paurees or steps. These are thirty-eight steps to the realm of consciousness and conscious experience within the human being, knotting him with Infinity. It is a step-by-step procedure and plan, a complete technology for the human to experience his own self within himself. It is methodical, rhythmic, poetic and prayerful. It contains, within its journey from beginning to end, the entire explanation in experience of the total Cosmos.

The Jap Ji Sahib is the meditation of the soul. It is the Word, spoken spontaneously by Guru Nanak upon his emerging from a river after three days of submersion. These are the words he spoke and experienced, by the grace of his Guru, the Shabad Guru, which is the Word itself. The thirty-eight steps in Jap Ji Sahib, in the science of numerology equal three plus eight which is eleven. Eleven is the number of Infinity, which brings mastery over all realms of existence.

This is the gift, the teaching, the food for our soul that Guru Nanak gave to us all.

The 19th pauree of Jap Ji Sahib is our focus. It is one plus nine equals ten in numerology. Ten represents the energy of the Radiant Body, and mastery of this pauree brings the experience of the Radiant Body which is you at one hundred and fifty percent. Otherwise you are total zero. This is it. All or nothing.

The hub of this pauree is the word Akharaa which means Word itself. In the unwritten journals of the history and evolution of man, there were certain practices which brought the human into a state of harmony and union with himself, with his surroundings and with his heavens. These practices were transferred from generation to generation. They were based on one thing: the science of the Word. The Word was their Guru and their Guru existed from the beginning of ages, has existed through all the ages, is now and always shall exist. This Guru Nanak also states in the beginning of Jap Ji Sahib: Aad Sach, Jugad Sach, Hebi Sach, Nanak Hosi Bi Sach.

In that time, and in the concept of that technology, existed the realization that a word was not a sound only, but it was the actual manifestation of the “thing” itself. In this concept, thoughts did not create words, but words created thoughts and thought patterns.

The mind followed the word rather than the word following the mind. So they discovered that by changing their words, they changed their reality and that by effectively employing words they could create their own destiny.

So this was their religion, this was their reality, this technology of the Word was their way of life. They used the Word and its power to affect their environment and they used the Word to build themselves as Divine Beings in Union with their Creator. Their reality was the power of the Word. As the cycle of time passed from age to age, this reality which had been practiced in experience became less and less practiced, less understood and less taught to the extent that it was not commonly understood.

Now in our times we are in the Age of Darkness known as the Kali Yug where truth is hardly practiced or revealed. But by the grace of Guru Nanak and his Guru, the Shabad Guru (the Word), these truths have been revealed bringing light into this Age of Darkness. This light will guide us into the Age of Aquarius where Truth shall be sought after and taught once again. Those who study the teachings of Guru Nanak shall be the harbingers of Truth in the Aquarian Age.

Thus the 19th pauree of Jap Ji Sahib is the explanation of the science of the Word.

There are countless remote worlds and peoples.

Even to say the word “countless” creates a heavy load.

Words are Your Wisdom, Songs and Deep Virtue.

Words make up the language we speak.

You who cause this are not subject to any destiny.

As you command, so be it.

As much as has been done, so many are Your Names.

Without Your Name no place exists.

Say, how can the Power of the Universe be contemplated?

Not even one time can we be a sacrifice unto You.

Who to You is pleasing, that one does good deeds.

You are forever. Oh Invulnerable—Formless One.

The pauree begins Asankh naav asankh thaav. Agam agam asankh lo. Asankh kaheh sir bhaar hoe. This is the preamble of the pauree. Guru Nanak explains that there is nothing in Creation which does not have a name. Everything has a sound identification attached to it and there is no way to count these names. Every place has places within it and every place is within another place. There is the place inside the atom and all the space within the universe, so who can say how many there are? There are even remote worlds and peoples we do not even know of, yet they too are countless. The word “countless” explains the entire weight of the Universe which we cannot even weigh.

This is the picture, the landscape of Infinity and vastness, beyond comprehension. Guru Nanak draws this picture with these three lines.

All of this is Akharaa. Akharaa does not only mean word as we understand it but it means Word as a creative power or shakti. This power, this Akharaa, is the essence of everything. It is harnessed atomic energy and it is GOD. It can create, organize and destroy.

This is the scope of its power.

The language of Guru Nanak talks to God and praises God. Words are Your Name, Your Praise, Your Wisdom, etc. This is because, in his basic concept, Guru Nanak was in communion with his Lord. Everything belonged to Him. Nanak was no-ego. In this acknowledgement Guru Nanak experienced Oneness and union.

Akharaa sir sanjog vakhaan—What’s written on the forehead is the record of all the words one has spoken. This story can only be read by a human being who has mastered himself in the science of the spoken word as had Guru Nanak. In the vernacular this word sanjog is the union or destiny of the human. If you understand that your destiny is composed of Akharaa, then you can change your destiny by consciously employing its power in your life. For example, if this pauree is recited eleven times a day, it will give you the mastery of the spoken word.

In review, the beginning of this pauree describes the realms of Infinity. The heart of it reveals to us the power of the Word in its essence, Akharaa. And Guru Nanak then explains, Jin eh likhe tis sir naaeh. Jiv phuramaae tiv tiv paaeh – You who cause this destiny to be written on the foreheads of men are not subject to cause and effect. Akharaa is the Law of Cause and Effect in action. As that rule is, so be it. There is no changing it. There never was, there never shall be a way to change it. You can’t hide from it, you can’t avoid it and you can’t ignore this order, this rule, this law of Akharaa. You might not have the good fortune to acknowledge it in your life but if it is in your destiny to understand it, then Guru Nanak has the technology to master it.

Vin naavai naahee ko thaao—Without the Word which is God’s Name there would not even be a creation. The world would still be in its unformed form with God all by Himself. This is what St. John meant when he said, “In the beginning was the Word, and the Word was with God and the Word was God.” To create all activity, all places and spheres, there had to be Akharaa, the Word.

Kudarat Kavan kahaa veechaar— You, who are the power of the universe, say how can we even contemplate Thee? The answer is in the question. We can only contemplate Thee by Your Grace, by Your Word.

Vaariaa na java ek vaar. God’s power needs nothing. Jo tudh bhaavai saaee bhalee kaar, Too sadaa salaamat
nirankaar. This is the seal of this pauree. You, who Guru Nanak has explained as Akharaa, the vital substance and activity of the Universe, You are forever beyond time and space. You are formless with all the creation. To You I bow.