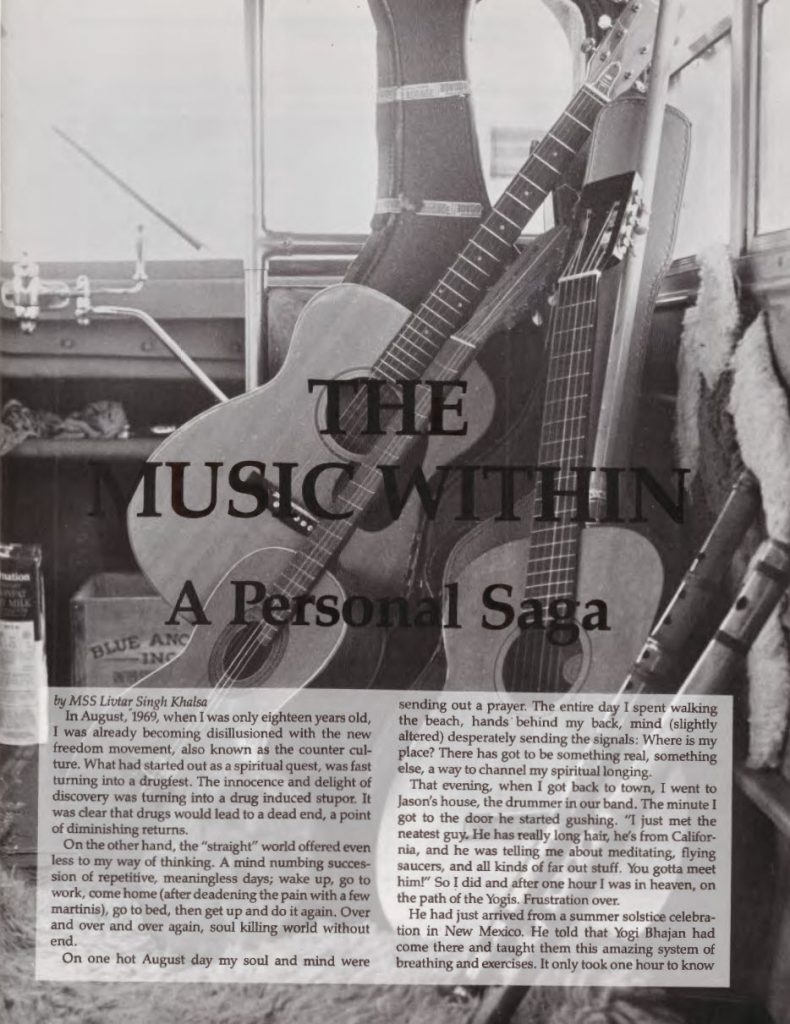 This article first appeared in the 1989, Summer “Bead 22” Beads of Truth and was written by MSS Livtar Singh Khalsa.

In August, 1969, when I was only eighteen years old, I was already becoming disillusioned with the new freedom movement, also known as the counter culture. What had started out as a spiritual quest, was fast turning into a drugfest. The innocence and delight of discovery was turning into a drug induced stupor. It was clear that drugs would lead to a dead end, a point of diminishing returns.

On the other hand, the “straight” world offered even less to my way of thinking. A mind numbing succession of repetitive, meaningless days; wake up, go to work, come home (after deadening the pain with a few martinis), go to bed, then get up and do it again. Over and over and over again, soul killing world without end.

On one hot August day my soul and mind were sending out a prayer The entire day I spent walking the beach, hands behind my back, mind (slightly altered) desperately sending the signals:

Where is my place? There has got to be something real, something else, a way to channel my spiritual longing.

That evening, when I got back to town, I went to Jason’s house, the drummer In our band. The minute I got to the door he started gushing.  “I just met the neatest guy. He has really long hair, he’s from California, and he was telling me about meditating, flying saucers, and all kinds of far out stuff.  You gotta meet him!” So I did and after one hour, I was in heaven, on the path of the Yogis. Frustration over.

He had just arrived from a summer solstice celebration in New Mexico. He told us that Yogi Bhajan had come there and taught them this amazing system of breathing and exercises. It only took one hour to know this was the prayer answered. John had intended to stay for two weeks, but we would have no part of him leaving. Just wouldn’t allow it. We made him start teaching us everything he knew and that’s how the Orlando ashram, one of the first, was started.

The next month I left for college. I also left my past for good. The day my father drove off and left me at the campus, September 13, 1969, was the last day any hair of my body was cut. My soul could not wait any longer to start back toward Infinity.

Perhaps it has always been the same. A new way of thinking and living seems to threaten and bring a fierce resistance. I was off on my new life without a second thought. I would be a Yogi, live righteously, naturally, and respect all living beings. But it was, after all, still the Piscean age.

When my father found out, he offered me a choice. I could voluntarily enter the mental ward of the hospital, or he would have me committed. He didn’t realize I was already committed.

Forty days in the asylum. Under constant scrutiny. I decided to make the best of it. My mission? Try to appear just nutty enough to get out of the draft (remember Vietnam was in full swing), but not so far gone that they would put me away for good. It didn’t work. I had no idea how crazy people really get.

While I was in the hospital, John Twombly decided to bring the Siri Singh Sahib to visit Orlando. I even gave John half my life savings for the plane ticket. $100. Whew! When he arrived in Orlando there was my little problem. I was stuck on the 8th floor of Orange Memorial Hospital. Exit by permission only.

There was nothing else to do. BREAKOUT! I escaped from the hospital to meet my spiritual teacher and attend his first class in Orlando. Every word he said that night was liberation. Every breath infinity. I was truly on my path.

Two days later he went to West Palm Beach to speak at a pop festival. I had to breakout again, but this time they were watching, so I took off my shoes so they wouldn’t think I was going anywhere and walked onto the service elevator when no one was around. My friend picked me up outside at a prearranged spot and we took off for West Palm Beach.

We had fifty cents between us. We used it for a small bag of popcorn; the only food we had for twenty-four hours. We slept in the rain, in crow pose, leaning against a pole, me barefooted, just to hear our teacher speak for ten minutes. I don’t even want to ask myself if I would do that today.

That was the energy of that time. Pure, dawning of the Aquarian Age, on a new mission, gonna save the world energy. Humanity was awakening to all things real, reasonable, and beautiful. We thought it was going straight from there, straight up. You could feel it, taste it in the air. The New Age was opening like a flower, the fragrance spreading like an atomic bomb blast. We didn’t know yet about the forty year detour. We didn’t know that this was only the selection process; to see who would be the players in this drama. The real process, the pressure that turns coal to diamonds, was soon to begin.

In January of 1970, I moved to L.A. to study with the Siri Singh Sahib. I moved into the Haeckel Academy of Yoga, also known as John Franzoni’s Ashram. We used to get up at 2:30 a.m., do an hour of Yoga, then chant long Ek Ong Kar’s for two and a half more hours. Then we would attend two classes a day taught by the Siri Singh Sahib. We spent our time getting very high meditating, learning at the feet of our teacher, and doing yoga, yoga, and more yoga.

On Baisakhi day of 1970, MSS Baba Singh and I went to the Gurdwara on Vermont Street to take our Sikh vows. I had realized that we were already living as Sikhs, so it was time to make it official. Sikh Dharma in the West was starting to take a visible shape, and the Guru was starting me on my own personal path of service to the Dharma.

I had been a musician since the age of seven when my mother had me take accordion lessons. Then I went on to study piano, and string instruments. In high school, I started my first rock and roll band. I played in bands throughout school. I always had one problem though. Try as I might, I could never write one line of lyrics. Nothing. Not a syllable. 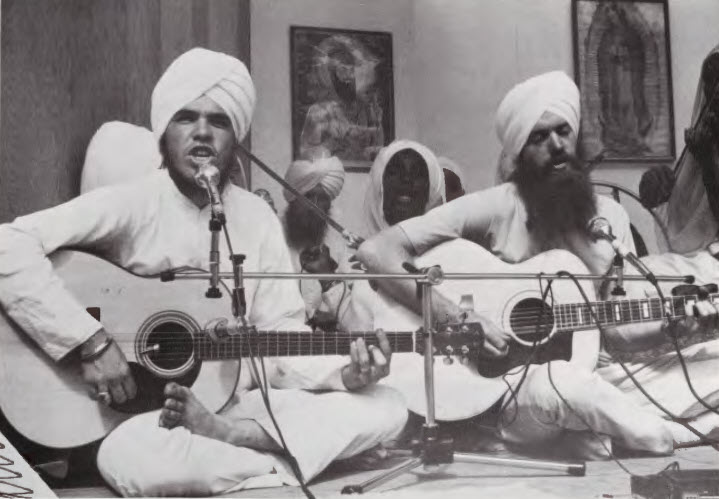 After that Baisakhi, I sat down one day and the music just came out. The touch of the Guru? The energy of the golden chain? Whatever it was, it had opened a channel where there had been none before. It was opened by something beyond me, for something beyond me. The music started to flow.

At the Summer Solstice of 1971, in Paonia, Colorado, the Siri Singh Sahib said something that has stayed in my conscious thoughts ever since…. “The day will come when we will be taken away in trucks, taken to be killed.” I still can’t imagine the scenario, but the image has not left me.

One day a few years later, I went to a movie. In the movie the hero saw his entire family wiped out by terrorists. He then dedicated himself to one purpose; to find and destroy the killers. In doing this he achieved a state of mind I had never understood. He was utterly fearless. The word fear did not exist in his universe. He was one pointed about his mission to the exclusion of all else. At the end of the movie there was a climactic battle. He wiped out the bad guys with the help of a housewife. She had to pick up a gun from a dead terrorist to shoot another one. His example of fearlessness inspired her to overcome her own terror. From this movie I finally understood fearlessness. Without fear. Not keeping it under control, but totally free of it. In this state all can be accomplished, even while the rest of the world is frozen in place.

I came home burning. I wanted to bottle this understanding, have it available to anyone who would need it. I wanted to write a song that we could sing as we were being driven away, a song that would impart that consciousness just by singing it; it would be for the most special occasions, the most traumatic events.

Two and a half hours later, Song of the Khalsa was written. It was delivered to me like a package from UPS. I hardly thought about it at all.  It just flowed out. After I had written four verses, I thought it was finished. Then I felt what I can only describe as someone knocking lightly on door, but it was inside my head. It said “You aren’t quite finished.” I said, “Yes I am, four verses is plenty!” It said “Ahem.” I said “All right, what is it?” “Baisakhi day we were thousands…”

Living a spiritual life is a day to day, minute by minute proposition. Earning a living, supporting a family, dealing with others’ problems as well as your own demons, representing your Guru through it. It helps take us out of the limitations of the mind, to bring out the spirit that is beyond time and space. In that spirit the music is written, so the spirit is preserved in it. Whenever it’s needed the song contains it. All we have to do is sing it.

Our songs define us, and they are part of us. As long as we sing our sacred songs, we will live in the grace and dignity of the Khalsa path. We cannot be defeated. And some day in the distant future, when there are 960 million Sikhs, some may wonder how so few of us could possibly have survived with the weight of the entire world against us. This is my answer. We took the form of our Guru. We breathed, we meditated, we sang our songs, and we enjoyed. The rest took care of itself.

“The Lord is the music and the musical instrument. The musician calls the tune that the Lord wishes him to.”