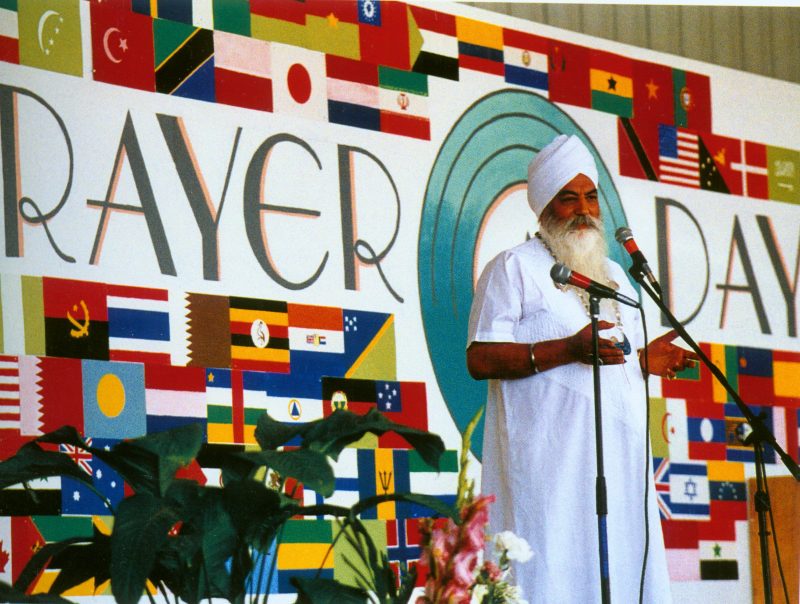 This article was originally published in Prosperity Paths in October 2000. It was written by Hari Kaur Khalsa.

History was made when the Siri Singh Sahib, Yogi Bhajan addressed the “Millennium World Peace Summit of Religious and Spiritual Leaders” at the United Nations during the week of August 28-31, 2000, as 800 religious leaders along with another 1,000 participants created an amazing and colorful impact in the General Assembly hall at the United Nations.

On Monday, August 28, 2000, the main representative of each of the world’s major religions spoke to the Assembly in prayer. The Jethadar of the Akal Takat was scheduled but did not make it. Professor Manjit Singh, the Jethadar of Anandpur Sahib, was sitting in an airport in India so the decision was made, and so it happened that our teacher, the Siri Singh Sahib, Yogi Bhajan, represented all the Sikhs.

He spoke of Guru Nanak’s teachings and gave some straight from-the-heart words in his message to the people. It was the high point of a didactic session.

The Sikhs of the Western Hemisphere were well represented in these meetings. Besides the Siri Singh Sahib, and Bibiji, three others were members of the official delegation, and there were half a dozen credentialed “observers.” We attended meetings,met with others, and communicated our beliefs with others who were interested.

The Siri Singh Sahib gave many interviews, and we were on television numerous occasions during the week. After two days of meetings at the United Nations, the “Summit” moved to the Waldorf-Astoria hotel. For the last two days there were workshops, receptions, meetings and intense networking happening in this less formal venue.

On Thursday, the Siri Singh Sahib Ji was the “emcee” for a luncheon given by the Namdhari International Trust. At that luncheon he expressed his gratitude to Bawa Jain for succeeding in the technically impossible task,  i.e. of gathering so many of the world’s religious leaders in one place, which made possible a high level of networking. We extend our gratitude to him as well.

Workshops on the environment, poverty, human rights, peace, and reconciliation were prevalent. One message repeated over several days by the Indigenous People’s representatives was a serious warning about the environment. The ice is melting at the polar caps at an alarming rate. Trees are being used up, without regard for the consequences. Members of South Africa’s Peace and Reconciliation Commission spoke on the importance of forgiveness. There was an incredible presentation on the origins of the Universe, stressing the interconnectedness of the Universe and all the creations of the Creator.

The conference was a rare and history-making event. Imagine how the United Nations; the secular cathedral of the world, was changed by the presence of so many holy people. We hope it will influence the politicians that will be there working for the future of the world in the next weeks, months, and years.