In the month of June this year, the Sikhs worldwide will commemorate the thirtieth anniversary of the Indian Army attack on the Harimandir Sahib, known as the Golden Temple of Amritsar, the most beloved Gurdwara of the Sikhs. This is a time of prayerful remembrance for Sikhs everywhere. Understanding the course of events that resulted in this catastrophic loss of life is difficult, and only now with the distance of time does the story start to take full form.

Prime Minister Indira Gandhi’s discontent of the Sikhs dates back to 1975 when President Fakhruddin Ali Ahmend, acting on the advice of Indira Gandhi, declared a state of national Emergency in India under Article 352(1) of the constitution on the grounds of “internal disturbance”. In the largest democratic nation of the world, elections were suspended and civil liberties were withdrawn by decree. This gave Indira Gandhi extraordinary powers for nearly two years and is one the most controversial periods of India’s history. During that time, the Sikhs of Punjab were the only group in India who actively and publically protested the degradation of democracy.

After the restoration of elections in 1977, Indira Gandhi was voted out of government and there followed a period of great political and economic hardship in India. Because of the “green revolution” and the hard work of Sikh famers, India averted another national famine even though the economy was suffering. However, by 1980 the success of the green revolution resulted in a concentration of wealth and power in the Sikh’s home state of Punjab. As a religious minority, the Sikhs held large part of India’s wealth and political power.

When Indira Gandhi was once again Prime Minister in 1980, she set out to neutralize what she perceived to be a growing political threat from the Sikhs who had opposed her in 1975. She instituted political and economic measures such as: The farmers of Punjab were forced by law to sell wheat only to the Central government at a reduced rate (the Central government then sold it throughout India at a highly profitable rate); The historical 5 rivers of Punjab were diverted away from the state, along with the electricity that they produced; The boundaries of the state of Punjab were re-drawn to dilute the voting areas of Sikh majority; And, at a time when the Officer’s Corp of the Indian Army was 93% Sikh, a new law was passed to reduce that percentage to reflect the national ethnicity where Sikhs were 2% of the population, forcing thousands of Sikh Army Officers out of service. Across the Punjab these harsh policies resulted in financial hardship, economic instability, and a high rate of joblessness among the youth. The Sikhs once again took to the streets in protest. Their political party, the Akali Dal, drew up a list of grievances known as the “Anandpur Sahib Resolution” in 1982.   The Dharam Yudh Morcha was launched, a nonviolent protest against the Central Government, demanding redress of these and other issues.

The center of the Morcha was the Golden Temple in Amritsar, the spiritual and temporal seat of Sikh authority. The government banned the right of assembly, and hundreds of Sikhs courted arrest daily in Amritsar. The civil disobedience and rallies fueled a resurgence of the practice of faith and was an outlet to voice the grievances of the Sikhs. What resulted was a perilous mix of religious fervour and growing militancy, especially among the youth. Gandhi quickly distanced herself from the Sikhs, proclaimed Sikhs as separatists, and actively sought to crush them. In the months that followed, the Sikh community was met with subterfuge and machiavellian tactics from all sides, leaving them confused and highly alienated from their country.

Fearing the growing political and military rhetoric on both sides, several of the international Sikh leadership asked Gandhi to promise she would never attack the Golden Temple. She promised this, but then authorized Operation Blue Star using the excuse that some Sikhs within the Golden Temple complex had amassed weapons. One hundred thousand Indian Army troops moved into the Punjab, surrounding the Golden Temple on March 25 1984. On June 1, Sikh pilgrims converged on the Golden Temple to commemorate of the martyrdom of the Fifth Sikh Guru despite the impending risk, and over ten thousand Sikhs were being housed in the temple complex. It was at this time of maximum civilian exposure, the night of June 5 1984, that Operation Blue Star was initiated. A complete communication blackout was ordered, and the Punjab was effectively cut off from the rest of the world. Phone lines were cut, journalists were expelled, and the state borders were sealed.

Operation Blue Star was a highly planned military attack on the Golden Temple complex that lasted all night and well into the next day. The Indian Army met stiff resistance from the Sikhs and responded with a full-scale tank assault. In the early morning of June 6th, the Akal Takhat, was entirely demolished by tank shells and although the Sikhs fought back, the Indian Army overpowered them. As reported by eyewitness accounts, the sacred Nectar Tank was left red with blood and bodies were everywhere over the broken marble. The treasury of the Golden Temple, which housed many priceless historical treasures, was destroyed and looted. And although fighting had now died down, the central library complex was looted and burned down. Many priceless manuscripts, some in the Guru’s own handwriting, were lost forever.

The number of people who lost their lives in Operation Blue Star will never be known. The Army refused to let the Red Cross enter the complex and instead cremated the dead en mass and without ceremony before the bodies could be identified. Family members were not allowed to claim the remains or perform any traditional funeral rites. It is clear that thousands lost their lives in the Temple complex, with the official number being 1,000 but a more realistic estimate being over 5,000. Elsewhere across Punjab, thousands of Sikhs were killed in army assualts at 42 Gurdwaras at the same time as the Golden Temple. Operation Blue Star was followed by a lengthy campaign of violence against any Sikh group or individual who could possibly rally the Sikhs back together. The people of Punjab were imprisoned, tortured, and “disappeared” during mid-night raids and fake police encounters. It is estimated that 250,000 Sikhs were killed or disappeared during the six years following the attack on the Golden Temple. As a result, an entire generation of the Sikh community was terrorised, displaced, or killed.

Ultimately, history has shown that Gandhi did not have to attack the Golden Temple. If she was trying to rout out the military element within the temple complex as she proclaimed, she could have used other methods such as sealing off the Golden Temple and waiting-out the militants. The timing of the attack was such as to have maximum effect on the community, knowing that thousands of civilians would be there praying and celebrating the Gurpurb.   Moreover, Gandhi could have allowed those visiting pilgrims the opportunity to leave prior to the assault. The brutality of this attack was unspeakable and unthinkable, with an aim to break the power and will of the Sikh people.

Given the atrocities that the Sikhs faced and the horror of the Golden Temple being attacked, it is no wonder that Gandhi was assassinated on October 31 1984, reportedly by her two Sikh body guards. After his mother’s assassination, Rajiv Gandhi spoke very provocatively by stating that “her blood must be revenged by blood” and this started 3 days of rioting against Sikhs. As a minority in India, Sikhs everywhere were targeted with the worst casualities being in New Delhi. Government officials sat back and allowed it to occur, ordering the police to do nothing, and drawing international suspicion that it was complicite in the violence. Sikhs were doused with petrol and lit on fire in the streets, homes were looted and burnt, and young Sikhs were brutally beaten, raped, and killed. Even today, those government officials who stood by and did nothing have not been brought to justice.

This month marks the rememberance of a very dark period of modern Sikh history. Even though 30 years have passed, the pain of this experience echos through the Sikh community. No family with roots in Punjab was untouched, and each one of us suffers our own scars. Even though human-rights groups have been actively involved since the 1990s, mystery still shrowds many of the events of that time, people are still missing, and wrongs have not been addressed. The Sikhs are resilient people and have rebounded socially, economically, and politically. However June 6th will live as a date of sorrow and sacrifice in Sikh history for all time to come. 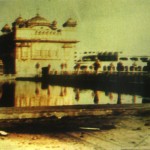 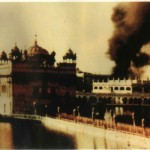