Renowned musician Mata Mandir Singh Khalsa offered a beautiful workshop on the concept of Simran, vibrational remembrance of the Divine through sacred sound! This workshop was taught live on Zoom on April 29th, 2022.

To talk about Simran we have to talk about the word “Shabad”. The “Shabad” is known in English as the “Word.” In the Hindu mythology it is known as the Brahma Naad. Every spiritual path has a name for this phenomenon. Science calls it cosmic radiation. It is the primal sound current or vibration that initiated the physical universe that we are all a part of.

To be absorbed in the Shabad is the essence of Sikh Dharma as I understand it. And it is not something very exotic. Nanak says in Japji, “ghat ghat vaaje naad.” That the Naad or Shabad, vibrates in every heart. Everyone has this as their essence. No one is without it. Something so universal and simple seems like it should be in every human’s common experience. Why is it that this is not experienced as the common denominator of all human beings?

Because we all are attracted to that most enticing of what the Gurus called  “ahamkar” one of the five thieves of consciousness, the “ego” sense and our attachments. This sense leads us into an “ I , me, mine,” state of consciousness in which we imagine that we are the doer. The mental chatter and host of desires that come from that dictates that we simply do not have the quietude to just “be”.

Simran is often translated as “remembrance”. To remember the Naam. Many understand this to mean to chant a mantra. However, my understanding is quite different. Repeating a mantra is known in Gurmukhi as “Jaap”. I understand scientifically that to do “jaap” leads to a state of “Simran.” If we change our own vibrational frequency to that of the Infinite, then we can enter a state of Simran.

In this class we discuss what the Sikh Gurus say about Simran and what is the final piece of the puzzle that we often miss in our daily practice. 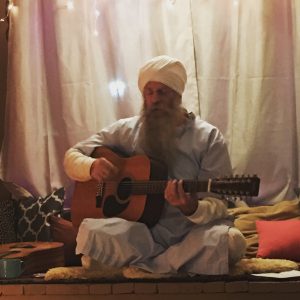 Mata Mandir Singh Khalsa is an international teacher of Kundalini Yoga and has dedicated his life to the practice and teaching of Naad Yoga, the yoga of sound. A heartfelt singer/songwriter and skillful musician (guitar, mandolin and cittern), he is a pioneer of the chant and mantra genre, having recorded around 30 CD and cassette titles since the 1970’s. Mata Mandir is a featured artist on Invincible Records label, with many new albums in progress. He is also author of the forthcoming book, Naad Yoga: The Yoga of Sound. Mata Mandir continues to teach and play music mantra concerts around North America, Europe and China, sharing his love for the sacred sound current which we are all a part of.