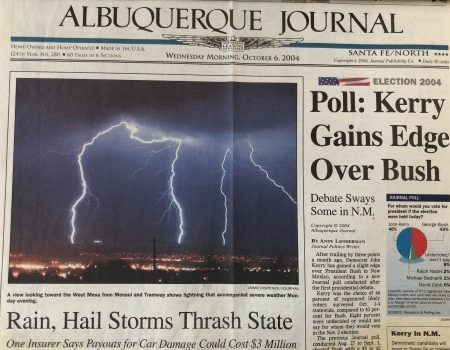 Fourteen years ago in the afternoon of October 6th, Yogi Bhajan breathed his last breath. At home on his Ranch, surrounded by family and students, he made that final journey and crossed into the subtle realm of spirit. For as long as I live, I will not forget the sounds, sights and sensations of that day.

Yogi Bhajan had been ill for a long time and was bedridden. The week before, he had his students push his wheelchair around the ashram to look at and touch each and every thing along the way. And although he then pronounced to all that he would live another six years, this rare excursion from his Dome had the joyous feeling of a blessing and the somber weight of a last goodbye.

On Monday, October 4th he started the process of withdrawing into that state of consciousness between life and death. Dark clouds gathered, and the afternoon was battered with thunderstorms. While that is a normal occurrence in summer monsoon season, by fall, New Mexico is usually graced with clear skies. But those three days in October, the sky roared and boomed like I had never seen before. On Wednesday afternoon, there was a wild, whooshing wind that ripped through the ashram with crashing thunder. I was not surprised when the phone call came that Yogi Bhajan had passed.

When I arrived at the Ranch, Yogi Bhajan’s wife, Bibiji, was sitting in the living room with a tear-stained face. “Call everyone, Shanti,” she said. “Let them come say goodbye.” At such a time when the heart was crushed, it was a measure of her compassion that Bibiji thought of the sangat and the feelings of others over herself.

Within the hour, the whole ashram gathered at the Ranch. Friends, family, students, and visitors alike sat together and chanted, “Guru 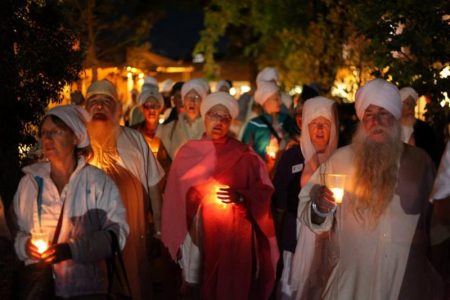 Guru Wahe Guru, Guru Ram Das Guru.” In small groups of two or three, everyone had the chance to come into the Dome and say their personal farewell to their teacher.

Finally, when everything was ready, we opened the Dome door to bring his still body to the waiting ambulance. The sangat opened a path, and he was brought through the chanting crowd. As we shut the ambulance doors and it began its slow crunching roll over the gravel parking lot, I was struck with the reality that all things had suddenly changed. The chanting to Guru Ram Das rang in my ears and floated around me and carried my heart through the days ahead.

Although Yogi Bhajan has been gone from this realm for 14 years, I still feel his presence in each Kundalini Yoga class, no matter where it is taught. His legacy flows through his teachings and these are a gift to us. I am grateful to the Yogi Bhajan Library of Teachings for preserving his voice and his message, not only for me but for all his students and the generations of seekers and students to come. 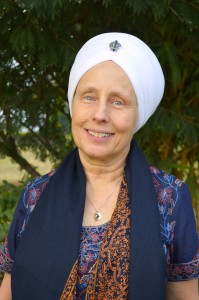 Shanti Kaur wrote this article for the October 2018 KRI Newsletter

Shanti Kaur Khalsa is a wife, mother, grandmother and professional writer who brings Khalsa values to every aspect of life. She is an engaging Sikh teacher who brings the wisdom of Sikh history into modern life. Shanti spent more than twenty years studying with Siri Singh Sahib Bhai Sahib Harbhajan Singh Khalsa Yogiji who inspired her on the path of Sikhism. She is an inspired kirtania who travels worldwide giving inspirational kirtan and lecture programs