Hacienda de Guru Ram Das, affectionately known as “The Ranch” was the home of Yogi Bhajan and his family, purchased in the 1970’s. It was a residence, as well as the location for many 3HO and Sikh Dharma events, which are still held here during the summer months. It started as a small adobe home on a dirt road, like most homes in this area. Over time it was expanded and beautified to match Yogi Bhajan’s vision. He and his wife Bibiji worked tirelessly to make their home a place to welcome students and guests from around the world, and the Ranch was always open to visitors for spiritual conversation and a delicious meal, often prepared by Bibiji. The Ranch House was the original home and later the Estate was acquired. Other buildings on the property served as guest houses and staff offices, some of which used to be barns and work sheds. Yogi Bhajan always improved and expanded on what was already existing and available.
The many statues and sanctuaries around the property show his devotion to the light of many paths leading to one universal Dharma. You will find many contemplation places on the light of the Divine Feminine and the gentle peace of the Light of the Golden Chain of teachers.

A Few Areas of Interest at the Ranch

The Gurdwara is the most special and sacred place for a Sikh to meditate and pray. Before entering, please remove your shoes and cover your head. Any cover will do; a hat, scarf, shawl, or baseball cap. For your convenience, head coverings are also available at the entrance on the counter to your right. The Siri Guru Granth Sahib, which contains the sacred writings of the Sikh Gurus, as well as writings from over 40 saints from other religions, is our living Guru, and resides in the Gurdwara. 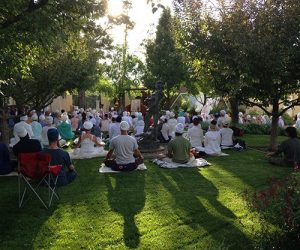 The Dome was Yogi Bhajan’s private meditation room. Members of the community built it in 1974 to 1975, as a gift in love and dedication to their teacher. Every spare moment was given to building it.
Once asked about why the shape of a dome was chosen, Yogi Bhajan said, “If you take the globe and cut it in half, it is the shape of a dome. Because of this, a dome contains the energy of the earth.” A dome represents the protective energy of the womb of our earth mother.
The Shinto Shrine was built in the 1990’s. Originally, Yogi Bhajan wanted his ashes to be kept here for a period of time after his passing. Later he changed his instructions, and some of his ashes were taken to Kiratpur, India, while others were distributed over Ram Das Puri located on the edge of the Jemez mountains. As it is a tradition upon entering a Shinto shrine to ring a bell, Yogi Bhajan had a bell installed, which you can see hanging from the ceiling in the center of the shrine
The Memory Stone is not a grave stone, as Sikhs do not have graves. Once a student asked Yogi Bhajan, “Sir, we have met you and know who you are, but what about the children who are yet to be born and the yoga students who did not get to meet you? How may they understand who you are?” Yogi Bhajan replied, “Take a stone as tall as I am (he was 6’2½”) and engrave it, “Born Zero, Died at One. Ketia dukh budh sad mar eh bhi dat teri datar.” “Born at Zero” means he came from the infinite, as symbolized by the circle. “Died at One” means he died when his consciousness was at One with God. The translation of the verse is, “Even all suffering and pain are gifts from you, Oh Lord.” Yogi Bhajan said, “If people meditate on this one line of prayer and understand its meaning, then they will understand the foundation of my life.” On the back of this stone is his favorite song, “The Song of the Khalsa.” The contents of the song are the essence of Sikh history and also his motto. 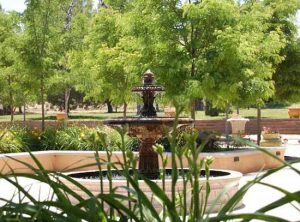 The Meditation Garden was created by Yogi Bhajan’s students so that he could continue teaching at the Ranch. It was named the Bhagat-E-Zarat Garden by Yogi Bhajan, meaning Meditation Garden. Yogi Bhajan was born and raised until he was 16 in what is now Pakistan—it was at that time a part of India—where the architectural style was strongly influenced by the Persian culture. When the community asked Yogi Bhajan what kind of garden he would like, he said that he wanted it in the Persian style. He told us that after his passing, many people would come to this garden to pray and meditate.

A Plaque to honor his mother  was installed by Yogi Bhajan. It is located outside his meditation Dome, near the Baba Siri Chand statue and fountain. Yogi Bhajan had a high regard for his mother and for motherhood.

“The most powerful prayer in the universe is the prayer of the mother.”

He taught that woman is the giver of all life. Therefore, those born of woman have to honor woman. He believed in honoring the divinity in all women and he taught that the Kundalini energy itself is feminine energy. If we want to experience Kundalini, we have to honor the divine feminine. He taught that honoring and revering women is the only path for the planet earth to survive.

“I believe that so long as those born of women do not respect women, there shall be no peace on Earth.”

he Estate  was acquired in the 1990s from a neighbor who passed away. Yogi Bhajan kept the single-wide trailer intact, building the Estate home around it. The Estate house served as a home for entertaining and still does.

The Log Cabin was a private meditation room for Yogi Bhajan. It has unusual carved cougar heads on the outside wall.

The Quan Yin statue on the front lawn of the Estate was a gift and was gilded with gold leaf to preserve the wood. Made from a single piece of teak, it measures 15 feet high. Quan Yin has a half open lotus in her left hand, as a symbol of fertility and with her right hand she is making a boon granting gesture that symbolizes nourishing the planet. This remarkable statue is regarded as the embodiment of compassionate, loving kindness and is treasured as an important part of the generous legacy of Yogi Bhajan.
The Buddha statue near the duck pond serves as a place for peace and quiet reflection.

The Our Lady of Guadalupe statue pays tribute to Northern New Mexico’s heritage. She and Quan Yin stand as a reminder to honor women and mothers.

The many statues  around the property are evidence of Yogi Bhajan’s respect for the essence of all religions. Meditating is an essential aspect of our lifestyle as Sikhs, and the Buddha statues and others serve as a beautiful reminder to meditate. 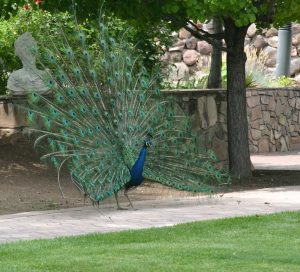