Guru Harkrishan’s life is an example and a touchstone for inspiration in our life and work. When out of compassion he decided to sacrifice his own physical body to heal a whole town, he put himself aside to serve others. The remembrance of giving a priority to serve others is a driving force in our daily activities. Guru Harkrishan’s sacrifice is a constant reminder to live with compassion and empathy for other people’s challenges, and to reach out to serve those needs. 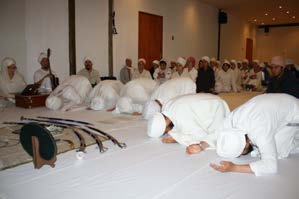 Here in Santiago, Chile the mission of serving the needs of our communities is sustained through a monthly Gurdwara service, together with several other Dharmic activities including Akhand Paths and Gurbani Kirtan. Our Gurdwara service is held on Sunday morning, served by 10 sevadars and attended by 20-30 people. There is also Ishnaan

Seva, usually served by 3-5 sevadars. Gurbani Kirtan is usually performed by one of three sevadars who have been trained by Ustad Narinder Singh in Amritsar, and also a tabla player trained by Murli Manohar. Gurbani Kirtan classes are also offered. People connect with the energy of the Siri Guru Granth Sahib, which is open for people to read all day long. Oftentimes, morning Sadhana includes a short Gurdwara service. Akhand Paths are held about three times a year (Siri Singh Sahib´s birthday, Guru Ram Das´ birthday and Kundalini Yoga Festival) in the Santiago area. Akhand Paths have also occurred in other cities in Chile, including La Serena, Viña del Mar and Valdivia. At the yearly 3HO Chile International Kundalini Yoga Festival, a full Gurdwara is held every morning at the end of Aquarian Sadhana chants. There are often Sikh and/or Amrit vows ceremonies and Anand Karaj. Nitnem and Gatka classes are also held during the festival. 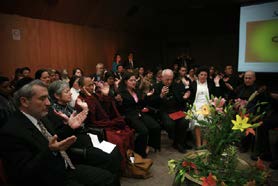 Inspired by the teachings of Guru Amar Das and the Siri Singh Sahib Yogi Bhajan, since 2003 every Thursday a group of volunteers from Langar Chile serves a hot vegetarian meal to homeless people outside of Vega Central and San José, San Juán and Posta Central Hospitals in Santiago. Since 2011, a group of volunteers provides the same service in Viña del Mar, and since 2012 in Osorno. 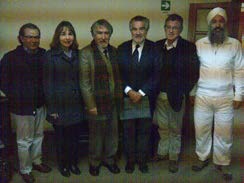