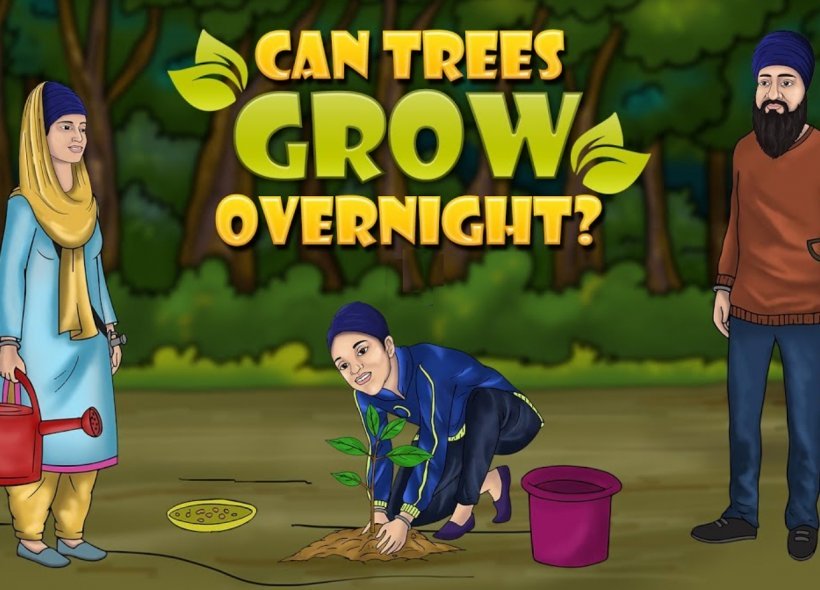 This story is Courtesy of Sikhnet.

This timely story, inspired by the pressing environmental concerns and global warming of our planet, takes a spiritual activist approach and tells of a young girl’s devotion and the divine guidance that came to her from God along with the miracles that followed when she combined faith with action. Written by 10-year-old Hunar Kaur Bhatia – 2019 SikhNet Script Writing Contest Winner – Junior Category.

In the future, people heavily damaged our Earth by polluting nature.

The news was always talking about how horrible things became: “Welcome to the evening news. While lack of drinkable water threatens billions of people’s survival, the ever increasing menace of air pollution is a risk to all life on earth. Normally rain mitigates this by cleaning the air. However this year has seen a global drought. Trees don’t grow overnight, however everyone knows the positive effect they have in creating climate . . . ”

But there was one girl who could change it all. In a small town, a Sikh girl named Simran Kaur felt worried for the planet. She did not like this troubled world she found herself in. No, she hated it and she wanted to do something about it. The next morning, she visited the Gurudwara and started meditating by chanting, “Waheguru, Waheguru, Waheguru . . . ”

She soon fell into a deep meditation of silence. Tears rolled down her cheek like boulders of ice rolling down a mountain. She stayed in that posture for a long time.

Suddenly an eye-blinding flash appeared! And soon Simran could see a shimmering ball of light glinting in front of her. A soft melodic voice broke the silence:

Why are you feeling so sad? What happened beti?

The divine sphere of light asked. Simran explained, “Waheguru ji, I am feeling sad because no trees are growing and it is due to human misdeeds. Only a few trees are remaining on our beloved planet, Our Mother Earth. I want to bring more life and joy to our planet. Waheguru ji, please tell me, is this the way to respect our Earth?”

Use Bhai Kanhaiya as your example and love will blossom.

Simran felt she was in the presence of Truth, she just didn’t understand the message. “But . . . who is Bhai Kanhaiya Ji”?

Bhai Kanhaiya has shown you the way.

Wahiguru then showed Simran something that happened in history. She saw there was a very devoted Sikh who had the darshan of both Guru Teg Bahadur ji and Guru Gobind Singh ji, “Oh Guru ji, I bow at your lotus feet, I will always keep your teachings in my heart.”

In her vision Simran saw how an army was attacking Guru ji’s city of Anandpur Sahib, and the Khalsa were bravely fighting back, “Bole So Nihal Saaaat Sri Akaaaaaaal!!!”

She saw that in the chaos of battle Bhai Kanhaiya was serving water to wounded Sikhs . . . as well as those who attacked Guru Sahib!

She saw that other warriors of the Guru were not happy that Bhai Kanhaiya was helping the enemy soldiers, “. . . It seems like a noble deed, but we don’t have much water. I think he should stop this. . . ”

After they made a complaint Kanhaiya was called by Guru ji himself, “Bring him to my presence.”

And how Guru ji asked, “These brave Singhs of mine say that you are giving water to the enemy. Is this true??”

Then Simran saw something which moved her in a way she had never felt before. She felt the heart of a saint. Kanhaiya ji responded, “Yes, my guru! What they say is true. When I see anyone, all I see in them is your face. I see God in all humankind . . . How can I not serve them?? I only serve YOU my Guru . . . ”

Simran’s eyes began to water hearing this saint of the Guru. It was so beautiful how Guru ji loved his saint, “Bless you Bhai Kanhaiya ji… Kanhaiya ji, you are right. You have understood the true message of Gurbani…”

And even gave him medicine to help, “My piari, from now on, you can also put this on the wounds of all those who need it.”

As a tear rolled down her cheek Simran understood that when we reach God, we see everyone AS ONE, “That’s the solution for our earth! We have to understand and ACT with the truth that WE ARE ALL ONE!”

Then suddenly, without any effort from her, some words came out, “As Bhai Kanhaiya sees Ik Ong Kar, so do I see the One in All. Dhan Wahiguru.”

So she did, “As Bhai Kanhaiya sees Ik Ong Kar, so do I see the One in All. Dhan Wahiguru.”

“This is your mantra. Repeat and plant seeds. Love shall blossom, everything shall become better.

There was another flash . . .  and Simran opened her eyes.

In this moment she felt she knew the Truth. Later she thought about this new mantra and she knew what to do. With stars in her eyes she went home and told her parents about what happened in the Gurudwara and they were so proud of her, “Wow sweety, you got a mantra straight from the Divine! You are such a beloved of Guru Sahib!”

Simran continued explaining, “. . . Then Wahiguru said that love shall blossom, so what I have to do is plant trees, feel that we are all One, and repeat the mantra.”

They instantly went to the market and bought some tree seeds. Then they came back home to plant them. The whole time she repeated the mantra as much as possible, “As Bhai Kanhaiya sees Ik Ong Kar, so do I see the One in All. Dhan Wahiguru.”

That night for the first time in a long time Simran slept without a worry in the world. She knew that everything would be taken care of. The next day, the whole family gazed in awe seeing a few enormous trees standing firmly in their garden. It was a miracle! How could trees grow overnight!? Her parents were confused and amazed, “It couldn’t be, it was just yesterday that we put the seeds . . . ” “Wow . . . it’s the Grace of God.” 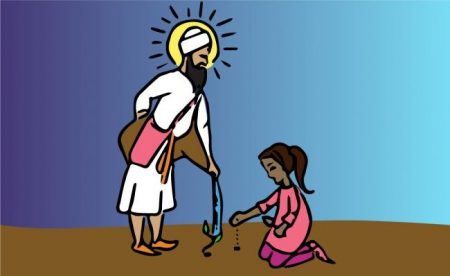 The news spread like wildfire and soon Simran’s house was surrounded by TV journalists who were asking her questions, “What do you say to people who doubt that these trees grew overnight?”

And she gave the answer the she felt was in the spirit of Oneness, “It doesn’t matter if you believe me. Once we see the truth, we will solve every problem. The truth is we are all together in this, all people and animals and plants, everything on earth is One together, and together we shall make a better future. We must take Bhai Kanhaiya as our example!”

So, people around the world tried it for themselves. They invoked Bhai Kanhaiya and began planting seeds all over the fields. But this miracle was just a tiny part of what was coming next: The special seeds from the trees planted initially by Simran, connected with other trees through the soil and water, their roots reached out to each other, and soon dense forests began growing all over the world.

English: As Bhai Kanhaiya sees Ik Ong Kar, so do I see the One in All. Dhan Wahiguru.

With the combined power of people’s chanting all around the world, the special seeds grew quickly and even barren fields were turned into lovely dense forests. In a month’s time, Simran went outside and saw something amazing. She saw dozens of dark clouds high in the sky above her. Her smile was a mile wide and her brown eyes glittered with cheerfulness, “The trees are bringing the rain! It’s working!”

A few minutes later, Simran began to dance happily in the rain, skipping and twirling in the drops of water. As the days passed, more trees began to grow around the world and everything became green again. People became happy and cheerful . . . All thanks to the almighty One – Waheguru Ji.

Listen to this Story