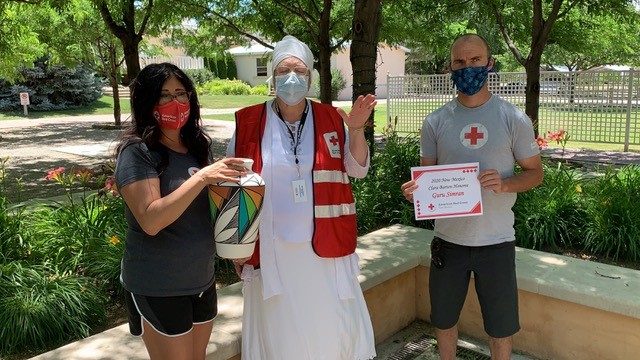 Many people know Guru Simran Kaur though her many years of serving hundreds of under-served school aged children in rural New Mexico through Food4Kids New Mexico.  What you many not know if that Guru Simran Kaur’s seva has spanned many other projects.

On Sunday, June 14 2020, Guru Simran Kaur from Espanola, New Mexico, U.S.A. received the Clara Barton Award from the American Red Cross for her volunteer work during natural disasters and times of crisis. The award, named after the Red Cross founder, is the highest honor that the organization bestows on volunteers.

“Her peers and staff, without a doubt, said that Guru Simran should get this award,” said Kathy Segura-Sala, the State’s Executive Director. “She is always there to support those in need, regardless of the time of day or night. Of all the volunteers I have worked with, she is the most willing, able and passionate,” added a regional organizer.

During the award ceremony, Guru Simran compared the work of the Red Cross to the ideals of the Khalsa. “The Red Cross is totally our spirit. At the time of Guru Gobind Singh, Bhai Ghanaya went through the battlefield and helped everyone who was hurt, on every side. The Red Cross has the same humanitarian spirit. We come when someone’s life has been totally crushed, when there are only a couple of pieces of steel left of a home after a fire, and lend a hand in their hardest time. Volunteering for the Red Cross is the absolutely best thing you can do in your life.”

We thank Guru Simran Kaur for her tireless service to humanity. Her service is an inspiration, and she makes our community proud.

About the American Red Cross:

The American Red Cross provides emergency assistance, disaster relief, and disaster preparedness education in the United States. Their trained staff and volunteers (95%) stand ready to meet the immediate needs of food, shelter, clothing, medication replacement, and mental health counseling for people who are displaced by man-made or natural disasters.

Guru Simran is the Custodian of the Siri Singh Sahib’s Ranch in Espanola, and the founder of the Food 4 Kids NM,  a nonprofit organization whose mission it is to provide supplemental food to local schools so that underserved children do not go hungry.