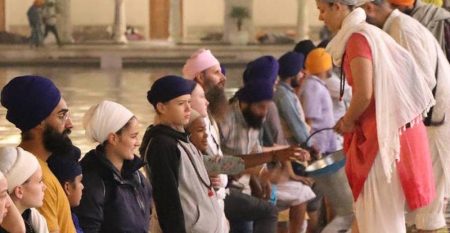 This article is courtesy of Miri Piri Academy

The site on which the Golden Temple rests has been a space for quiet reflection for centuries. Originally a small lake in the middle of a forest, many saints and sages have stopped here to meditate and dip in the holy waters. Both the Buddha and Guru Nanak have been known to have meditated here, but it was through the blessing of Guru Ram Das, his excavation of the pond and the founding of Amritsar, that it has become the center that it is today. 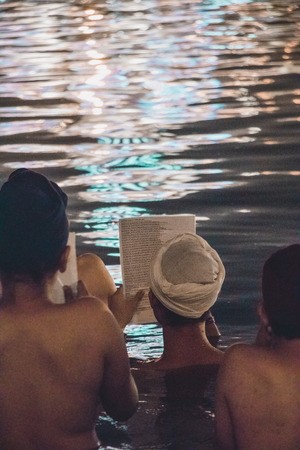 Every day, large numbers of devotees come to dip in these holy waters. During our school’s 40 day seva, many students engage in a personal practice of dipping each morning in the healing nectar tank. With so many people dipping in these waters, many wonder how the Amrit, the ‘nectar of immortality,’ is kept clean.

The sarovar, with a capacity of 31,000 gallons, was earlier partially dependent on rainwater and would dry up in the summers. During the British period, it was connected to the Upper Bari Doab canal of the Ravi river, thus ensuring a year-round water supply. A network of ingeniously-designed tunnels facilitates the easy and free flow of its water at all times. In addition, a part of the water supply comes from tube wells installed in the Golden Temple complex.

There are several measures that have been undertaken to keep the sarovar clean. The many fish that live in the sarovar, including common carp, rohu, mrigal, and katla, help by eating the algae. A complete emptying of the nectar tank and cleaning by devotees has occurred five times. The first was June 17, 1923, then March 31, 1973, October 12, 1984 after Operation Blue Star, on May 19, 1988 after Operation Black Thunder, and on March 25, 2004. 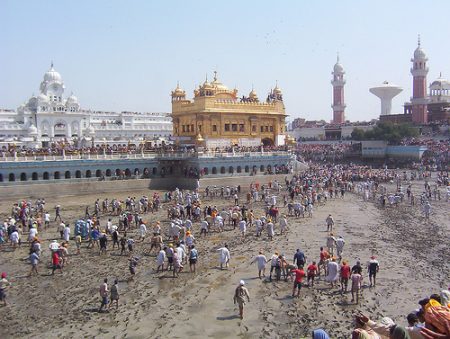 During these times thousands of Sikhs and other devotees travel from far and wide to work together to remove silt from the bottom of the tank. Madhu, our librarian, remembers participating in this kar seva with her mother as a child. She fondly recalls being able to walk right under both the Golden Temple and the bridge leading to it.

During the 2004 kar seva, a devotee donated a state-of-the-art water treatment and filtration plant for the sarovar. The water that flows into it is cleansed in this plant and aeration ducts, which pump continuously, supply oxygen to the sarovar. The foundation goes 16-17 feet deep. Since there was no cement at the time that it was built, a lime mixture was used to plaster the walls built with slim Nanakshahi bricks. Though the sarovar is lined by concrete today, its base is still untiled so that groundwater may naturally recharge. Wastewater from the daily parkarma seva is disposed of into a drain, which earlier used to lead to city sewers, but is now diverted to recharge wells. ​

Many of you might be familiar with the work of scientists who have studied the impact of positive vibrations on water through observing the crystals formed by water labeled in different ways. Imagine the healing vibration held by the water in this Amrit Sarovar, where the Guru’s bani has been vibrating for hundreds of years. Today,  we join many thousands of sangat members to take a daily sip and dip in these holy waters.

The Miri Piri Academy Annual Fund supports not only our operations, academic program and facilities, it also supports our Financial Aid program, which makes it possible for more than 66% of our students to attend the school. Your gift to Miri Piri Academy is a gift to the future generations, who will bring their knowledge and their spirit home to share with their communities all over the world. Help us change the world, one student at a time.