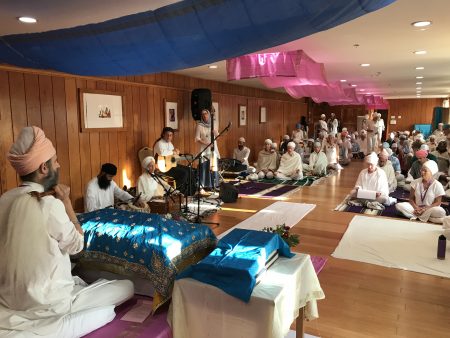 One of the unique things Sikh Dharma International does is to create a Gurdwara at both Sat Nam Fests—in the Berkshires and at Joshua Tree.  I had the opportunity to experience the one In the Berkshires this year.  Like the Gurdwara at Solstice, these Gurdwaras often provide people with their first Gurdwara experience.

Gurdwara was held every morning at the end of sadhana in a dedicated Gurdwara space which had been made beautiful by the set-up crew with turquoise silk covering the wall behind the Guru, a gold silk canopy over the Guru, and pink silk over your head as you approached the Siri Guru Granth Sahib .   A group of regulars attended every day as well as others for whom it was their first Gurdwara.  The Gurdwara program was accessible to newcomers with the musicians explaining what would happen next.

Snatam Kaur is a big supporter of the Gurdwaras at Sat Nam Fest.  She offered kirtan one morning to a full house, singing a shabad from her latest album.  She also taught a class in the Gurdwara to over 75 people.  For an hour she led everyone in chanting “Ek Ong Kar Satgur Prasad” which is said to contain all the wisdom of the Siri Guru Granth Sahib followed by chanting “I am the Light.”  In that elevated space everyone was invited to form a line and bow before the Guru with an intention, prayer, or projection.  Then they all formed a circle around the Guru while Snatam Kaur did the Ardas and took the hukam  instructing everyone to be open to the words and to any feelings that might come to them.  It was a beautiful introduction to Sikh Dharma for many and inspired many to return to the Gurdwara the following morning.