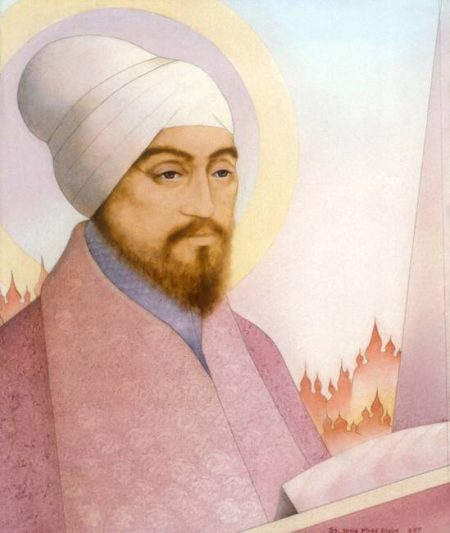 This story is excerpted from the book Heroes, Saints and Yogis: Tales of Self Discovery and the Path of Sikh Dharma, compiled by Shakti Parwha Kaur Khalsa and Guruka Singh Khalsa.  It is about Guru Ram Das and his sons, Prithi Chand, Mahadev and Arjan Mal.

When Arjan Mal was in his teens, one of Guru Ram Das’ cousins came from Lahore to Amritsar especially to invite the Guru to attend his son’s wedding. The Guru said, “I am not able to attend but perhaps I can send one of my sons instead.”

When Prithi Chand was asked to attend the wedding, he said, “I have to take care of the collections, and anyway, I hate going to weddings.” Actually, he was afraid that if he stayed away from the Guru too long, he might lose his chance to be appointed successor. He figured, “out of sight, out of mind.”

Guru Ram Das then turned to Mahadev, the son who spent most of his time meditating. Not unexpectedly, Mahadev refused, saying, “I have no desire to involve myself in worldly affairs.”

Finally, the Guru asked Arjan Mal who said, “I only desire to do what you wish.” Very pleased with this reply, Guru Ram Das told Arjan to share the Guru’s teachings with the Sikhs in Lahore and give any donations to the free kitchen to feed the poor. The last words he said to Arjan were, “Stay in Lahore until I send for you in writing.”

Arjan Mal stayed in Lahore after the wedding, and all of his relatives and all the other Sikhs he met there grew very fond of him. Still, every moment he was away, his heart was with his father, Guru Ram Das.

When he expressed his longing to see his father to his new friends, they suggested he write a letter asking to return. Arjan wrote a beautiful verse and sent this letter to his father. When the messenger reached Amritsar, Prithi Chand, suspecting he carried a letter from his brother, told him, “I will take the letter to the Guru myself.” Prithi Chand read the letter and realized it was so beautiful that it would surely move the Guru’s heart in Arjan’s favor. Hiding the letter in his coat, he sent the Sikh back to tell Arjan that the Guru said he should stay in Lahore until sent for.

When Arjan received this message, he knew that Prithi Chand, and not his father, had sent it. So he sent a second letter with strict orders that it must be given directly to the Guru.

Again Prithi Chand intercepted the letter, grabbing it out of the messenger’s hands. Hiding the letter in his coat, he sent back the same message telling Arjan to remain in Lahore until sent for. When Arjan heard this from the messenger, he wrote a third letter. This time he wrote the number “3” on it. He told the messenger to be on his guard against Prithi Chand and to give the letter only to Guru Ram Das in person. This time, the messenger waited until Prithi Chand left the Guru’s court and then quickly found the Guru and gave him Arjan’s letter.

When the Guru saw the number “3” on this letter, he knew that he had not received the first two. When the messenger told him what had happened, Guru Ram Das called for Prithi Chand and asked him three times if he knew anything about the other letters. Prithi Chand denied it each time. Of course, the Guru knew better. He told the messenger to go to Prithi Chand’s house and bring the coat hanging by the door. When he returned with it, the two missing letters were in the pocket. The Guru confronted Prithi Chand with this evidence and his son’s lie was revealed in front of the whole congregation.

Immediately the Guru sent Bhai Buddha to Lahore in a carriage to bring Arjan Mal home. Finally united with his father, Arjan humbly placed his head on Guru Ram Das’ chest against his long beard, while the Guru hugged him gently in his arms. The Guru said that since Arjan had written three stanzas, he should now write a fourth and finish the poem.

Upon hearing the final verse, Guru Ram Das said, “The Guruship is passed on because of merit. Only one who is most humble can carry it, therefore I grant it to you.” Then according to tradition, the Guru sent for a coconut and five
paise (coins) and placed them before Arjan. He stood up and, in front of the whole sangat, placed Arjan upon his seat. Bhai Buddha pressed the traditional tilak (red mark) on the center of Arjan’s forehead as a symbol that the light of Guru Ram Das had now passed to him. Thus Arjan Mal became Guru Arjan Dev, the Fifth Sikh Guru.

The poem that Arjan wrote is called “Shabd Hazare.” Guru Ram Das announced that the devotion that inspired it was so great that singing it only once equals the power and benefit of singing a thousand shabds! Whoever recites it will never be separated from the Guru or from those they love.

Although he was only 18 when he became the fifth Sikh Guru, Arjan possessed deep spiritual understanding and an angelic quality that easily touched the hearts of his devotees. Throughout his entire life, Guru Arjan Dev was always filled with deep inner peace.

My mind longs for the Guru’s darshan

But the rain does not come.

I can find no peace without the darshan of my beloved Guru.

O my beloved Guru, my soul longs to serve you and have your darshan.

Your face is so beautiful and hearing your bani brings me deep peace.

It has been so long since this chatrik has seen any water.

Blessed is the ground beneath your feet.

My soul longs to serve my dearest friend, my beloved Guru.

Every moment I am away from you is the whole Kali Yug for me.

When will I see you, O my beloved Master?

I cannot get through the night without the sight of your Court.

My soul longs to serve at my True Guru’s Holy Court.

I am blessed, for I am with my Saintly Guru.

I have found the Eternal God within myself.

I will serve you every moment of my life, and never be away from you again.

I devote my body and soul to your service.

O my Master, slave Nanak lives to serve you.

Editor’s Note: a Chatrik is a family of songbirds that includes the peafowl, nightingale, cuckoo and kohel. They cannot drink water from a pool, so they sit on their perch and catch raindrops in their beaks.