India had come to very dark times. The emperor was a cruel man who killed his older brother so he could rule. He was unkind to his own children and starved his father to death. He did everything for the sake of power. He was a very feared ruler by his subjects and did not have any love for people of other religions. Even most Muslims didn’t like him. He asked his advisors,

“What do I have to do to gain the trust of my fellow Muslims? I will do whatever it takes.”

“Sire, there is only one way to gain the trust of all Muslims…That is by converting Hindus to become Muslim. Destroy Hinduism from the root. The center for Hindu priests is in the land of Kashmir. Convert them first. Once they are Muslim all others will follow.”

Aurangzeb issued orders to give offerings to this holy city to show how religious he was. He ordered all the musical instruments destroyed.

“May MUSIC never be heard again!!”

He introduced a tax for all non-muslims.

“Collect the holy tax from all non-believer infidels!”

He also made orders to convert Hindus to Islam.

“If a man converts to our religion give him money, if a woman converts, give her half as much money.”

He offered position, land and money to anyone who converted.

“I will be famous in history! A great servant of God! Sher Afghan Khan, you are my governor in Kashmir. The great task is on you!”

Sher Afghan Khan was extremely cruel and merciless. He gave the Hindu’s two choices: Either they change their religion… or they die. Many, many Hindus refused to convert and they were killed. Fear spread all over India like a dark cloud…. 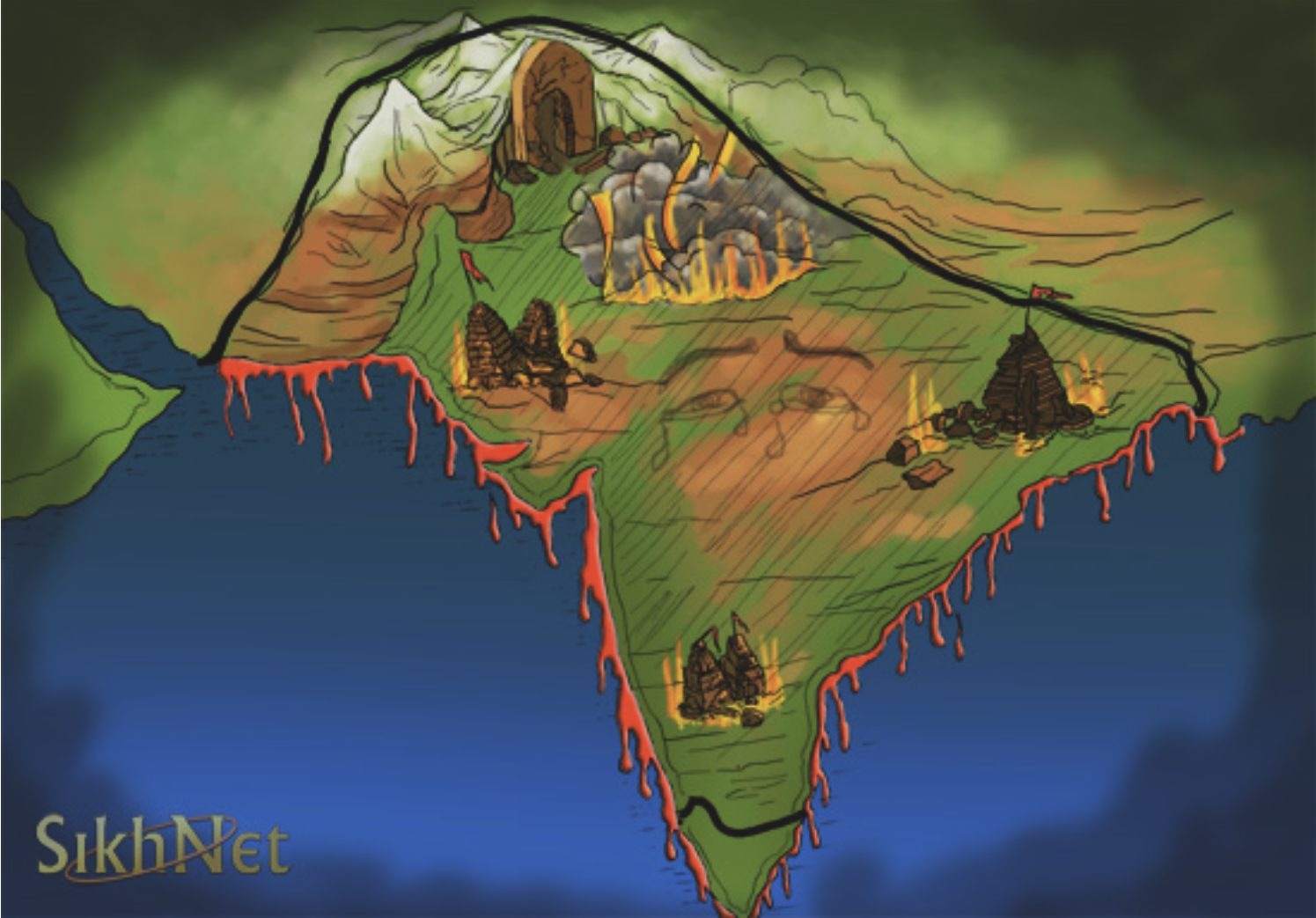 One pundit prayed from the bottom of his heart,
“Holy gods and goddesses, I am being forced to turn against you, or I will be killed. I shall not betray my faith in you. What can I do? I am your child. Save me, save us all from this oppression.”

He had a vision.  A heavenly voice spoke to him.  It said,

“The gods and goddesses cannot help. Guru Nanak is the spiritual king in this dark age. The 9th Nanak is now seated on his throne. Go to him. He will protect your religion and your honor.”

So he and all the other Pundits journeyed to Anandpur to meet Siri Guru Teg Bahadur ji!  Guru ji kindly welcomed them to the house of the Guru. They looked sad. They told him of the horrible things that were happening, “Temples are being destroyed.  Even Gurdwaras are being destroyed. They have collected a huge pile of Sacred Hindu threads from those who’ve been killed or converted. Who knows how many of us have been killed. We have done nothing to deserve this! If we do not convert, we will die too. But how can we give up our faith?? We have come to you for help! Save us from this tragedy… this DESPAIR!!”

Guru ji felt how these kind-hearted men were so sad. He felt what a difficult situation they were in. Just then the Guru’s son walked in.
“Hahahaha!”  Gobind Rai was about 8 years old. He saw all of this sadness. He hugged his father and asked,
“Pita ji, why are these kind men so sad??”

Guru ji answered, “My beloved son, the emperor is forcing them to give up their religion, under threat of death. There is no end to their misery.”

Gobind Rai asked, “What is the solution?” And his father answered, “These rulers, they are acting like animals, their hearts are frozen. They need to be softened; their hearts need to be warmed… What is required is the sacrifice of a holy soul.”

Innocent Gobind Rai said to his Guru-father, “Dear Pita ji, in this dark age, who is more holy than you? Go and offer yourself! Save them!” 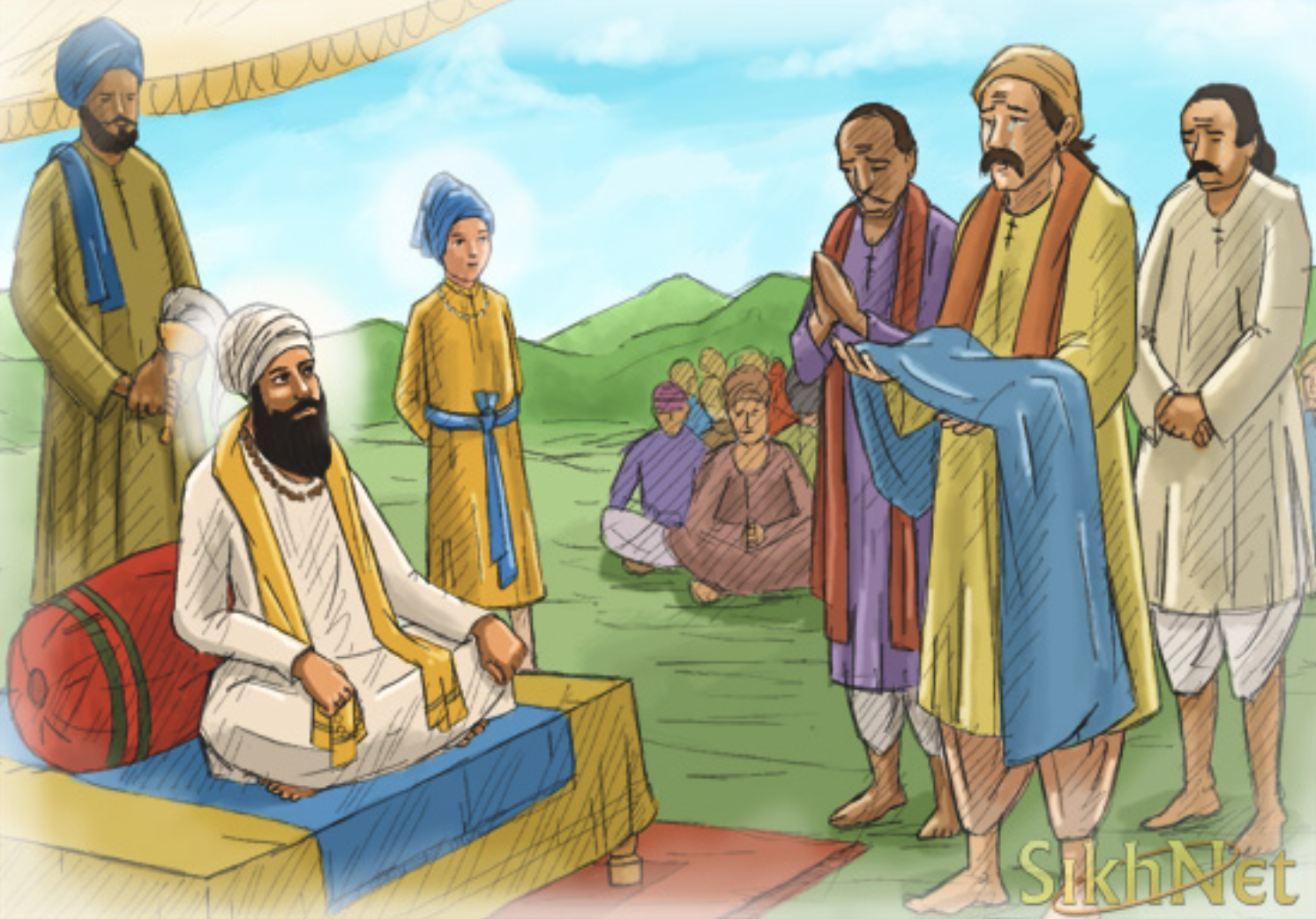 Guru Teg Bahadur knew what needed to happen and he welcomed it as God’s Will. Guru ji had a message sent to the emperor:

Kirpa Ram: “Ahem..Emperor Aurangzeb… The 9th Guru, Guru Teg Bahadur is now seated on the throne of the Great Baba Nanak. He is our leader now! and he has a message for you. If you can convince the Guru to join your religion, then all of his Sikhs will convert.  All us Hindus will convert as well.”
Aurangzeb was happy to hear this,

“All the Sikhs and Hindu’s are going to convert!!  It’s like a dream come true! Eehehehahahaha…. Ahem, God is great.”
Guru ji was summoned to Dehli… and on his honor he went.

On the way to Dehli, Guru Teg Bahadur ji shared the Naam with all people. The words of the Guru were welcomed just like water is welcome in a desert,

“This world is not real, it is a picture like in a dream. The only thing that is real is Truth. Give up your life but do not give up your faith.”

When the Guru finally made it to Dehli, the emperor tried to convince him to give up his religion.

“Become Muslim and you will be a famous and great priest in my court. You will be rich and have everything your heart desires.”

But Guru ji replied,
“My heart desires to live just as God Wills me to.”

The emperor didn’t understand the Guru’s message,
“But I am doing God’s will! The most high God came to ME in a vision, and so now I have to convert the whole world to be Muslim!”

Guru ji told him the truth, “I don’t know what God you are talking about, but if the One God wanted only one religion, then why is there more than one religion in the first place?

Everything that happens is in the will of Creator.  That is what we all must follow. You, nor I, nor anyone can change it… The Divine has willed that.. there will be Hindus, Muslims… and Sikhs.”

Aurangzeb didn’t like the Hindu religion,
“But the Hindus worship statues! This is an utter, damnable insult to God and it must be stopped!!”

Guruji shared the Guru’s way, “I do not believe in idol worship either. But everyone is a child of God. Everyone should be free to worship as they wish.”

Aurangzeb failed to convert Guru ji, so he tried something else,
“Well, leader of the Sikhs, if you are such a man of God then you should perform miracles to prove it. A man of God can always do miracles.”

Guru ji refused,
“I will not do any miracles. To undo what the Creator does is an insult to the Heavens. My heart has no greed.  I do not want your positions or wealth. I will not change my religion, do what you want with me.”

The emperor was impressed with the Guru but that was not enough for him to change his nature. His advisor again poisoned his ear,
“My liege, the Guru is your enemy, if you have mercy on him now, people will think you are weak.  He has not converted to Islam nor performed a miracle as you told him. If you let him live, his life will be an insult to you.  You must make an example out of him” 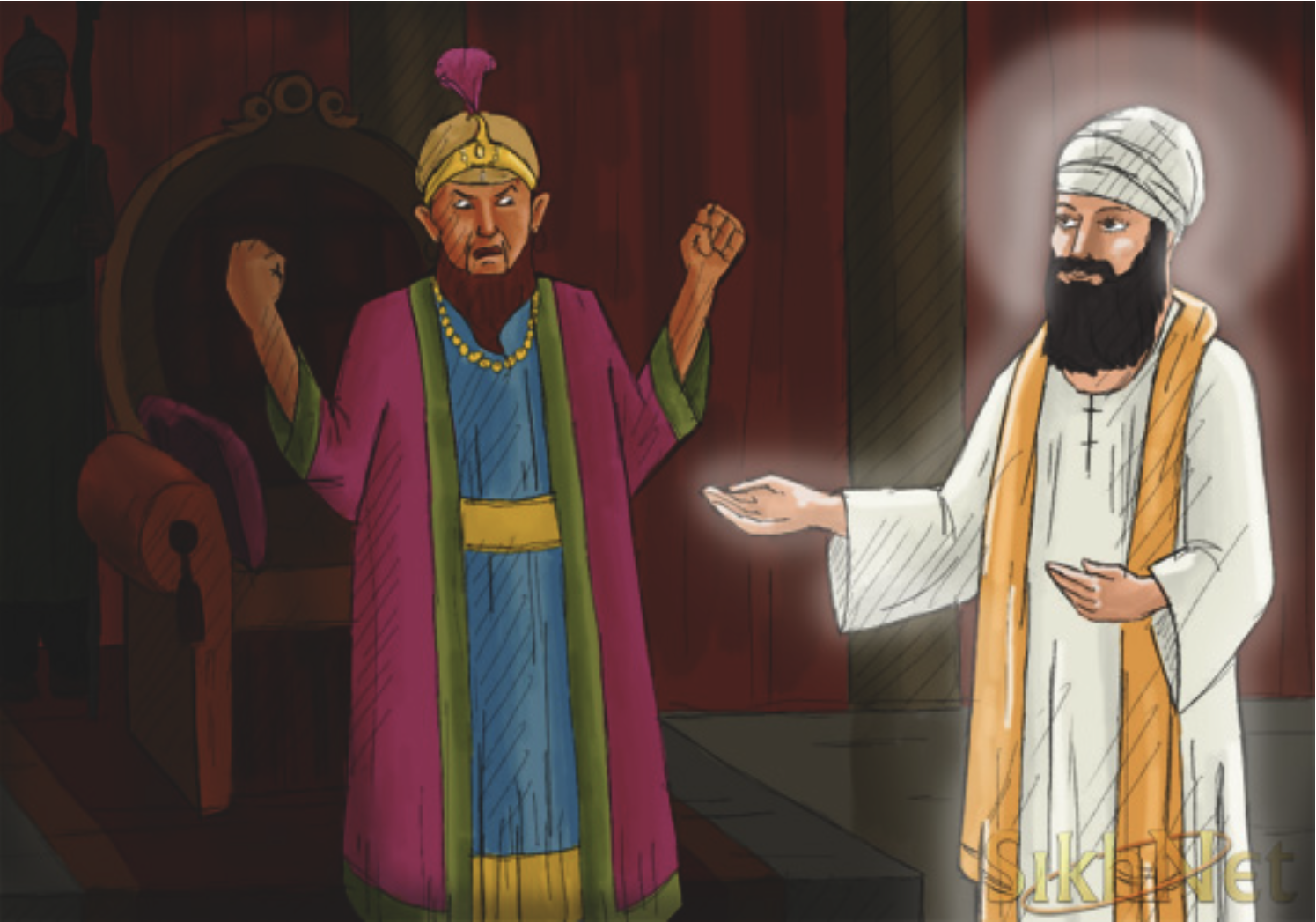 Aurangzeb became angry that the Guru would not convert or perform a miracle, “That heretic!! Take him and torture him until he submits!”

The Guru was tortured, but he didn’t shake a single bit. In fact he looked happy, “Lord, your will is sweet to me.”

One of the Guru’s Sikhs was slowly and painfully tortured to death in front of the Guru’s eyes. But nothing could change Guru ji. All the Guru sees is the hand of God at work. His life was almost over, he was tortured and in chains, and even then he wrote divine poetry,

“Every moment not spent praising the Creator in your heart and with your breath, that moment is wasted. Says Nanak, Oh my soul, love the One like a fish loves the water.”

A servant was sent to the Guru’s house with a message from the Guru,
“Tell my family, son and Sikhs to not worry for my life. These rulers became great from good actions in their past lives. They are destroying their legacy with their wrong actions now. If they spare my life, their empire will last long. But since the ruler has set himself to do bad deeds, this empire will begin to crumble. My body will die soon. It’s not a bad thing.  Let us all be happy with God’s plan.”

The servant returned to the Guru’s house and told them what the Guru said. He also showed them the Guru’s poetry. The young Gobind Rai read a line his father had written,
“My strength is gone, I am bound down, I can not do anything at all.

Says Nanak help me now, One Creator, You are my only support.”

Gobind Rai smiled and composed his own version of this line,
“My strength has come, my bonds are broken, I can do everything. Says Nanak, everything is in Your hands oh Creator.  You alone can save me.”

The messenger returned and shared Gobind Rai’s poetry with Guru ji who was pleased with his son,
“Hahaha, my son.”

While the heavens were shifting the guruship from father to son, the emperor still tried his tricks.

“Tell the Guru, if he converts he will be given a very high position, he will be happy. If he doe not, he will DIE! This is FINAL!!”

But Guru ji was courageous,
“I will not give up. The threat of death does not scare me at all. I am ready to die happily.”

Aurangzeb issued the death penalty,
“Just kill him! Chop off his head!”

Guru ji showed us the meaning of courage,
“I will gladly give my head, but I will not give up my faith!”

Then he bowed to God and the swordsman severed his head from his shoulders. The Guru’s life ended while a huge crowd sadly watched the scene. The people cried, but the heavens cheered. Just as a rain drop merges in the ocean, his soul merged in the Heavens. 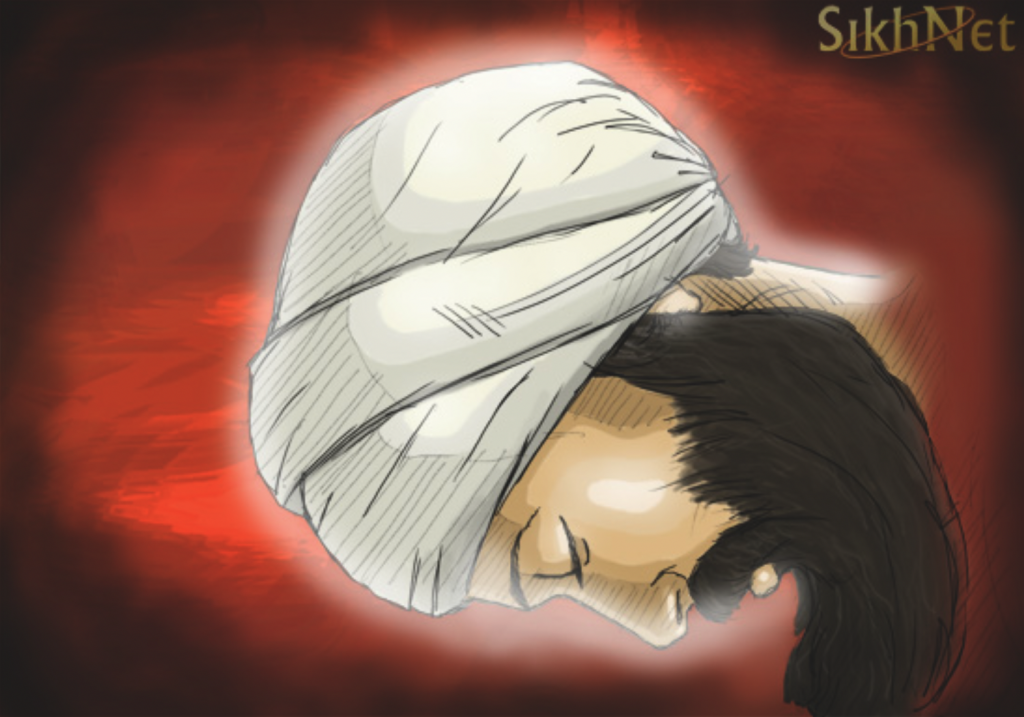 Guru Teg Bahadur ji sacrificed his life to stand strong for everybody’s freedom. He saved many lives and inspired countless souls. Today, he inspires all of us to stand up for freedom!

Many more difficult times were ahead for all Muslims, Hindus and Sikhs who did not like the emperor. But this empire would not last much longer. The tenth Guru now sat on the throne of Baba Nanak,

“One Sikh will take on more than a hundred thousand opponents!! On that day, take the name of GOBIND!”

In the name of Nanak may all people be in high spirits! May all beings be blessed by God’s Grace!

The Guru came to help all people reach to the highest.

The time had now come for the sweet Sikhs… to take up the sword.

Guru Gobind Rai said,
“Now I will turn pigeons in to hawks!! ”

Guru Gobind Rai later called all his Sikhs together on one great historic day in human history: Vaisakhi day

This story is courtesy of SikhNet.