Vikram Singh, who used to be among us, played Kirtan at the Golden Temple in 1979 as a ‘western Sikh’ during one of our early yatras. His Kirtan is ever divine and he is a part of the history of Sikh Dharma.

Chardi Kala Jatha are also among the first Western Sikhs to play at the Golden Temple in the Darbar Sahib (honored court). They play whenever all three are in Amritsar at the same time – Sada Sat Simran, Jugat Guru Singh and Harimanderjot Singh.
Continuing the tradition, a new group from our school in Amritsar – Miri Piri Academy – led by its principal, Jugat Guru Singh, along with Guru Prakash Singh, Shabad Singh has begun to play Kirtan regularly in the Golden Temple Darbar Sahib. It is both an honor and a privilege to be among the very first “Western Sikhs” who studied with Yogi Bhajan to be asked to play at the Golden temple. All the proper Ragas, times, shabads and proper pronunciations must be adhered to according to the strict Golden Temple regulations. 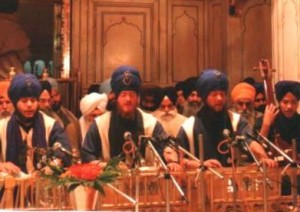 Chardi Kala Jatha had to appear and play before a board and had to receive specific permission to wear their Damalas (Nihang style trubans) while playing in the Darbar Sahib. Because of their connection, their purity, and their achieved status among the ragis, they were granted special permission. I feel that this is an honor for all of us, every person among us. We are all a part of this “Golden Chain”. 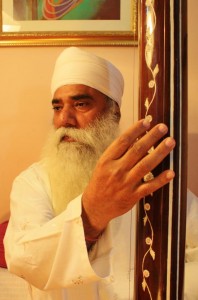 It was a particular direction from the Siri Singh Sahib that Chardi Kala Jatha spent many years studying all the different Ragas and styles of Indian classical music. They were called on often to play in front of the Dome whenever the Siri Singh Sahib was in residence. Particularly in his final days the Jatha could be heard on the lawn in front of the Dome playing kirtan. He was quoted as telling the Ustad Ji (Narinder Singh), of Chardi Kala Jatha, to carry a “big stick” when teaching them. It was his personal job to make sure each sound, beat, style, pronunciation and distinct Raga was learned correctly. The Siri Singh Sahib was instrumental in approving Ustad Narinder Singh Ji.

I recall the story and the day when the Siri Singh Sahib called the Jatha to his dome on a particular Sunday after Gurdwara. He asked them why they were not on the schedule that day and why he was deprived their kirtan. It was a heavy confrontation. He gave specific instruction for them to play whenever they were in town. It was also his instruction that they play and teach throughout India and the US and that they develop “other” jathas out of MPA and continue the tradition of learning and teaching all the Ragas and different styles of indian Classical music. This was not to interfere with their regular jobs.
It was a specific mission given to Jugat Guru Singh to be at MPA and spread Siri Singh Sahib’s teachings personally and to spend several hours a day (on the side) practicing with Ustad Ji and the Chardi Kala Jatha. The jatha now also studies with the renowned raagi Bhai Balbir Singh.

We deeply appreciate and congratulate them on this accomplishment. Their kirtan, including the full Asa Di Var (a difficult task), has been enjoyed by sangats all over the US, London, Singapore, Malaysia and India. Sada Sat Simran Singh, Hari Mander Jot Singh and Ajai Singh are currently on tour, sharing this precious technology and also raising money and awareness about MPA.
Many sangats in the US have had the distinct honor of hosting many established and respected ragis who come and share these sacred teachings. Among a few are Dya Singh, the late Bhai Avtar Singh, his son Bhai Kultar Singh, Bhai Baldeep Singh and now Ustad Narinder Singh, to name only a few. We know that interacting and studying with these masters will open the doors for many western Sikhs to expand their knowledge and play in the Golden Temple Darbar Sahib in the future.

Of course, whether or not it is a mission to play at the Golden Temple, many western sikhs have been instructed to learn and share different styles of kirtan. We honor everyone who sings and teaches kirtan all over the world – Livtar Singh, Guru Singh (who wakes us for sadhana every year at solstice), Harbhajan Kaur, Sangeet Kaur, Guru Shabad Singh, Pritpal Singh, Shanti Kaur, Dev Suroop Kaur, Snatam Kaur (who sings all over the world) and Sat Kirn Kaur (who has also started a school of Naad) to name only a few. We have so many accomplished musicians among us today that I cannot name them all, but please feel included because you are. We have many more who teach, document, and notate these precious ballads and shabads so that we have them forever. It was our early songs that gave us spirit and it is our songs and our kirtan that keep us alive and in great spirit today!

Thank you, from the bottom of my heart to the ever expanding Chardi Kala Jatha, and to all of our accomplished musicians. You are our bridge to the Divine.