by Bachansukh Singh, aka Tod Sherman

I somehow always knew Kundalini Yoga was right and perfect. I had begun Kundalini Yoga in 2007.  In 2013, I participated in the online course “Journey into the  Heart of Sikh Dharma.” This was a major turning point.

The date was October 25th 2014, when I got the call!!  Mom’s fallen and they’re taking her to the hospital. My Wife, Dawn, is a 100% physically Disabled Veteran and 100 % PTSD. She and I had been married 30 years at the time.  She had broken her shoulder and within days, the VA replaced it.  24 hours after surgery, while recovering in a local nursing home, Dawn contracted the deadly diseases C. diff and Septic Shock. She was sent to the Isolation unit at St. Marys hospital, where she lay in an infectious Disease coma, non- responsive for 4 Months.

I was in a fog of war – of life and death. I was a Service Manager for a local automotive repair shop. I called them and said, “I won’t be back till she’s OK”. Now, I had no income or insurance. I sat at her bedside through rain, sleet, and snow. I was there at 4am chanting, waiting for the doctors every day in my white Kundalini clothes, always wearing my knit cap or turban. The nurses and doctors seemed to adopt and love me.

I had done an 11-minute meditation for 11 and 40 days. Now, I contacted Ashrams in California, Espanola, Texas and Florida requesting prayers daily. I began what turned out to be a 120 Day Life Saving Sadhana. Somehow, I knew that God and Guru would get us through this.

The doctors had given her every antibiotic known, and still no response. I just chanted and prayed every day that she would know I was there. For Christmas, they told me to wear an infectious disease gown and sleep in the chair next to her, because she probably won’t be here in the Morning.  Two (2) weeks later, she opened her eyes and said, “I heard Your Prayers and decided to live.” She then spent weeks recovering in a nursing home before returning home in February.

White Tantric Yoga in Oakland, California would be March 8 2015. I hadn’t missed one in years. And, after all that had just happened, it felt even more important that I participate this year. Dawn was recovering slowly and I arranged for home care, so I could leave her safely for a few days.

After being home just a few days while sitting on the couch drinking homemade Yogi Tea, I began to have chest pains. If this had occurred while Dawn was in the hospital, I probably would have thought it was just heartburn and gone to bed. But, Dawn took one look at me and dialed 911. I was 99.8 %  blocked on the right side main artery. This has only a 4-6% survival rate. They did emergency surgery to save my life and I was home doing yoga in 3 Days. The heart doctor said that my Yogic breathing was probably why I am alive today. 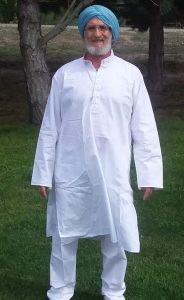 Bachansukh Singh (Tod Sherman) is an IKYTA member and KRI-certified Level One instructor living in Reno, NV. He has a separate certification in Kundalini Yoga for PTSD from the Guru Ram Das Center for Medicine and Humanology. He is the Veterans Outreach Coordinator for The Yoga Center Reno and teaches weekly at the Reno Veterans Hospital.