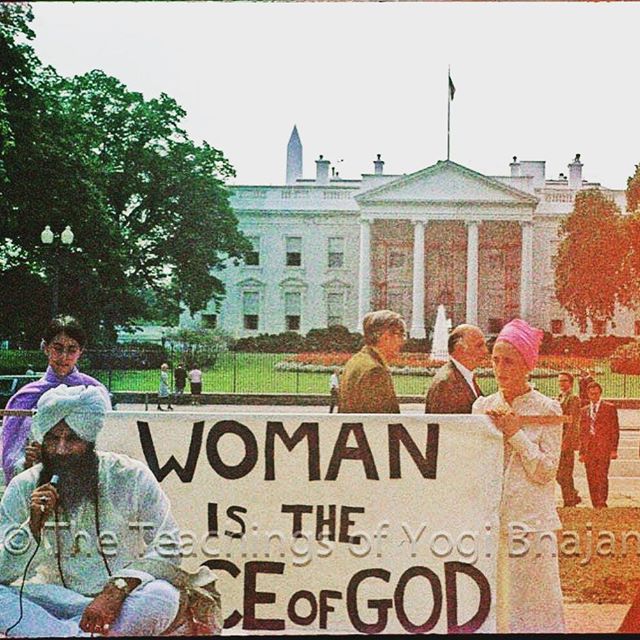 “The following was a speech given by the Bhai Sahiba to a Jewish congregation at an event where she was invited to speak.”

Thank you for the opportunity to be with you today in celebration of our unity in spirit, as part of the universal family of humanity, under the One God that created all of the religions.

When I sit in prayer in your beautiful temple, I am humbled by the profound divine presence, and I have often thought of the many similarities we share in our spiritual traditions.  The beautiful covering of the Torah, often with a canopy when transferring the Torah from one place to another is a practice similar to the Sikh tradition for our sacred writings. The open hospitality to all and your “Kiddush” after services is similar to the Sikh “Langar” or community meal served freely to everyone following our services. I have met many Jewish men who keep their full beard, as practiced by Sikh men. I am sure that the more we would learn about each other, the more we would find we are much the same! And yet, the differences are only in our practices, which are all performed with prayers for the upliftment and spiritual awakening of humanity that we may all dwell in God, in peace and love.

Promoting Equality and Human Dignity for all Beings

For the past several decades, societies of the world have been examining the concept of equality, debating bias in the work place, in social arenas, in the home, and in religion. Jewish communities from the earliest recordings of civilization have provided a guiding light for humanity lo live in a spirit of unity and equality for all people. There have been scores and scores, too many to name, of Jewish scholars awarded the Nobel Peace Prize, from the early 1900s to the present, in virtually every category. A love of education, science, and religion for the upliftment of humanity are qualities that we share with each other.

While ancient records of Jewish teachings are traced back more than 6,000 years, the Sikh Region has only come about less than 600 years ago. The founder of the Sikh Religion is known as Guru Nanak. It is much more recently in the broad scheme of time, that we consider it our greatest good fortune that Guru Nanak has addressed the concept of equality as one of the core instructions of our faith.  He taught Ik Ong Kar, which means that there is One Creator of the Creation and the Creator and the Creation are One, and One Spirit which moves throughout all creation. It was during very turbulent times in India that Guru Nanak was born, when cast hierarchy and sexual prejudice and bigotry were rampant everywhere. Into this melee, he heralded a simple, yet profoundly universal message, teaching the equality of all human kind. It is according to his teachings that Sikhs cherish every being as divine in God’s court. Everyone sits equally together at our Langar, or community meals, and each is afforded honor and dignity, as in the court of the Divine.

Woman is the Grace of God

Guru Nanak also taught that woman is the Grace of God upon this earth. Having observed many popular traditions and rituals of his time, Guru Nanak saw that women were degraded, thought of as property, and treated as lowly and unworthy. He condemned these practices, and he is often considered the first emancipator of women in India. In a sacred verse, he wrote:

From a woman we are born
In a woman’s womb we are formed
To the woman we are married.
Woman is our friend and from her we create our family.
If a woman dies we seek another.
The woman is the bond of the world.
Why call woman evil or low when it is she who gives birth to Kings.
Without woman, there is no one.  – Asa Di Var,, Guru Nanak

Guru Nanak proclaims it is woman’s responsibility to complete the destiny of our human consciousness to reach our infinite potential in the divine creation of God.

In matters of worship and prayer and the individual’s right to meditate on the Holy Name of God, as well as lead others in divine song and verse in praise of God, Guru Nanak proclaimed that men and women are equal in all respects.

The Egalitarian Way—Understanding, Peace, and Harmony in the World

It is my ardent prayer that the One God may ignite in the hearts of everyone the inspiration to awaken to the egalitarian way, to each carry that spirit by which teachings of human dignity and equality for all people may bring the light of understanding, peace, and harmony to this world. If we unite to make this a living reality, then discrimination, fear of others, and the hatred which stems from that fear, would be no more.