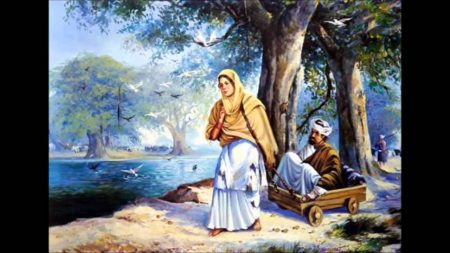 Living in divinity, the Siri Singh Sahib taught us, is to constantly remember to befriend our soul, to know our beloved Lord is divine, and to dwell ever in that consciousness, to dwell in God. Har carries a depth of meaning; it has been used to denote the world, the body, the mind, a sacred temple, the holy congregation, and the Lord’s palace. In its essence, Har means the abode of the Lord God. The most divinely beautiful and sacred hymns uttered by Guru Nanak Dev Ji describe its meaning.

“This body is the Lord’s mansion wherein is revealed the jewel of Divine comprehension.

This world too is the Lord’s mansion. Without the Guru, there is inky darkness in it.

Within God’s mansion is the divine treasure of the Name, but the foolish know it not.

By Guru’s grace, I have realized this and now I keep the Name enshrined in my mind.

God’s palace is also His shop, which He maintains embellished in divine song.

In that shop is the merchandise of the divine Name, remembering which the Guru-wards finely

The story of Rajni perfectly depicts this remembrance. One day, while eating their afternoon meal, Seth Duni Chand asked his five daughters to tell him who is it that provides them with all of their essential needs? Four of his daughters replied that it was their father. But his fifth and youngest daughter, Rajni, said, “O dear father! We receive what is provided by the Lord.”

Seth Duni Chand was enraged at this answer and to teach her a lesson, he married her to a leper. Rajni accepted the leper as her husband with her heart, body and soul and placed her leper husband in a basket and set out on her journey. One day, Rajni came upon a small, serene pond near a Jujube Beri tree, and she placed the basket there-near the bank of the pond-and went in search of food. Black crows were bathing in the pond, and in so doing, they were turning white! The Leper, astonished, bathed himself in the waters, and he was healed.

When Rajni returned she just wouldn’t believe the healthy young man. So, they went before the court of Guru Ram Das, and he assured Rajni that the beautiful young man was her husband. God had rewarded her divine heart and cured her husband of all ailments.

The small pond was excavated by the Guru’s Sikhs and it is the sacred tank of nectar, in the midst of which majestically stands the Golden Temple, the Hari Mandir, the House of God, and just so, we are each a golden body temple for that Divine Lord, who resides within all.