View more teachings about the 2nd Pauree of Japji Sahib

In the second Pauree of Japji Sahib, Guru Nanak states that by recognizing the command of the One, the ego, which holds us back from having the experience of consciousness, is sublimated. He tells us Hukmee, which is from the word “Hukam” meaning command or order. Here in Japji, Hukam also means the natural order of the universe. Guru Nanak says that everything is subject to the Hukam of the One; none is outside it… ~ excerpted from the book, “Guru Nanak’s Call of the Soul:  Japji Sahib” available on our Marketplace.  We also have a Spanish version as well. 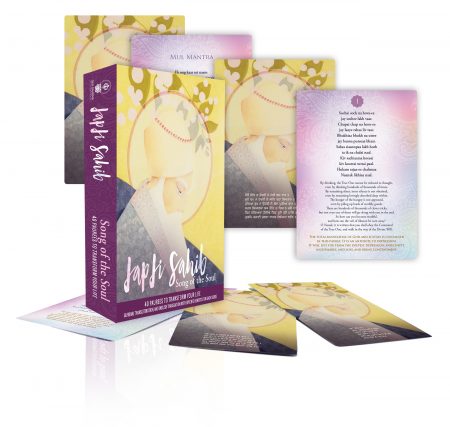 Purchase the Full Set of Japji Meditation Cards from the SDI Marketplace!

NEW DESIGN!  This beautiful set of meditation cards includes all 38 paurees, the Mul Mantra and the Shalok from Guru Nanak’s Japji Sahib, the early morning prayer of the Sikhs. Each pauree is written in Gurmukhi, Gurmukhi transliteration and English.  A lovely box contains and protects the cards.  Also included is a booklet with the effect of each verse, along with guidelines for meditating on it.