Do you rotate this earth?  How many of you go to the equator, and run with your feet to keep it revolving?  Are you doing it?  If you cannot revolve it, then why do you want it to be stationary? Let it revolve. It doesn’t bother you. Don’t bother it. Are you the owner of this earth?

The One who has given you life will take it. Why the hell are you hurrying up, thinking and planning and God knows? He gave your life to you. Did you ask for it?  Do you remember writing an application?  Paying any fee for it? It was given to you. If food is given to you, chew it. Enjoy the beauty of it. Where is the fun if food is given to you and you can’t digest it?

Look at who you are, your existence, your vibration.

You know, in India there is a problem. I have seen the same problem here. Every young man wants to be an actor. Every girl wants to be an actress. Ninety-nine point nine percent of the people in the underworld, who slave away their lives, up to death, are those who wanted to be that way. They run away from schools or colleges. They run away from home. They end up in a totally horrible situation.

Here everybody wants to be a musician. Everybody thinks with one hit song, they will get millions of dollars. It’s a strange world. You go to Los Angeles, you go to New York, you go to New Delhi, you go to Hong Kong. The underworld is the same everywhere. Everything else is different. But the technique of the underworld is solid negativity.

Last year, when I was in Hong Kong, somebody told me, “Oh it is very negative.”

Is there anybody among you who does not know where there is spirit, there is life?  To be great is to have the spirit in you.  The joy of everything comes from finding the spirit in it. To know, feel and be the spirit of something is the secret of every success. The spirit can take you above the impact of the environments.  Even the greatest man cannot stand the impact of the environments. Man is a man. He is sixty percent water. When tyranny takes over and clouds the destiny; when the darkness of slander comes to a person, it shakes up even the greatest people. But there is one spirit in a man, and that is “I am, I am.”

If a man knows he is not alone, if he knows his God and Guru are by his side, then he knows it is three against one. He is going to win anyway. The very concept of it is this: my Giver, my Creator; my creation in me, the spirit; and me; we are three and that ignorant and arrogant person is only one. What is he going to do?

Guru Teg Bahadur said, “No, I am not going to perform a miracle.”

The Emperor asked, “Why?”

He replied, “I am not going to perform a miracle. If God does it, I have no problem with that.

Days and days went by. One day, somebody said, “The emperor wants to see a miracle.”

The Guru laughed and said, “He will see it anyway. Don’t worry about it.”

Guru Teg Bahadur was beheaded. There was a little message given to the Emperor from the Guru after that,

“I gave my head, but I never showed you a miracle.”

To heck with you, Emperor, with all your empire, you couldn’t force a man of God to do something. You couldn’t subdue his spirit. You subdued him in his physical form, but his spirit remained alert. Your temptation, your promises, your offerings, you did everything possible on earth which could mean anything. But one thing never happened: the Guru’s spirit never got subdued. 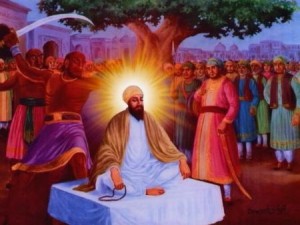 Emperor Aurangzeb wrote a letter to his son when he was on his deathbed. He said, “I came with a great spirit. I had a huge empire. I had the whole world in my hand, but today I am wandering in darkness. I am living in pain and my anxiety tells me I have no hope. I was one with God, but now that one God does not come in my thoughts. I never knew what a huge sin I committed.”  He sent that letter to his son, and it is in the records

That emperor was so fanatically religious that he would make Muslim prayer caps with his own hands, sell them in the market, get the money, and eat. He would not take a penny from the empire. He was totally religious, but a fanatic.  Fanatic to the extent that he thought his religion is the only religion which should exist and that everything else is wrong. He forgot the law of polarity. Wrong has a right and right has a wrong. God created the universe. All can live in His will, but Aurangzeb wanted people to live his will alone.

You hear about a lot of tragedies with the human race. In Aurangzeb’s time, there was a great tragedy. To feed his hunting dogs, ten thousand men who were considered holy from the other religions were picked up every morning, chopped up and their blood and meat were left for those dogs. If a man went for a walk early in the morning, and didn’t return by evening, people knew where he had gone.  The Emperor’s dogs were considered very holy and those men were not, so they were asked to be food for his hunting dogs. It was that kind of empire and that kind of rule. But as a person, in himself, Aurangzeb was perfect.

There are many examples among the human race where man has tried to lay his path over others, where man has manipulated something to achieve a step further.  He does not know time and place are two things that can cause a cause.  He does not know that if he goes really fast, perhaps he will come to a time of trouble. If he would have just slowed down, it would have been all right. This is known as blindness.

When an obstruction comes into our lives, we feel very upset. We suffer. We think everything is ruined.  No, it’s not true. A car without brakes is not going to be driven on any road.  These obstructions, these negativities, these nuisances are part of the game. They give you a chance to cross over them. But you can’t cross them because you have not acquired friendship with your own spirit.

Once a commander in the army gave an order, “Forward march!” The army started marching. They kept marching and marching until they came to a huge wall. They couldn’t go over it. So they marked the time by staying there and marching.

Somebody asked, “You fools, why don’t you stop marching and jump over the wall?”

He came back and told them, “You are very wise.”

The person went to the commander and said, “Why don’t you give the order to scale the wall?”

He said, “Well, the wall has a purpose. First I must investigate why there is a wall.”

The commander said, “No, they are tired. They are marching. They have to keep their blood circulating. Let them mark the time until I know.”

The person said, “You are cruel to your men.”

The commander replied, “No, me and my men are not two things.”

“Well, your head and your arms are not two things.”

He said, “Arms are arms. The head is the head.”

The commander said, “Then you do not know how to live.”

My impulse must merge in the impulse of another being for the sake of harmony.

The brain emits four impulses or four waves. You call them alpha, beta, gamma, and theta. One day they are going to discover that there are eleven total. These are only four. I don’t want to give them a bad name because they are trying. There are eleven facets of the brain. Each facet of the brain except the neutral brain emits impulses. The neutral brain receives the impulses, but medical science doesn’t know it.  Don’t worry about it. All they know is alpha, beta, gamma, and theta. Tomorrow, they are going to proceed further.

Try to understand a very practical situation. If somebody is angry and blasting away, and if you tell him, “Hey, don’t be angry,” you are going to get your nose punched. It’s not going to work out.

But if somebody is angry and says, “I am very angry.”

You say, “But I am not angry with you. Let us be angry at something else.”

You can immediately divert his attention. Don’t mock his anger, don’t tell him it is wrong to be angry, don’t start giving sermons. You will lose your teeth!

What do we require?  We require the sensitivity to control our impulse in a very simple way. If I know how to control my impulse, then I also know how to tune my impulse at the rate at which I want to merge my impulse. It means I am a mastermind who can create harmony with anybody I like. That is what self-control is about.