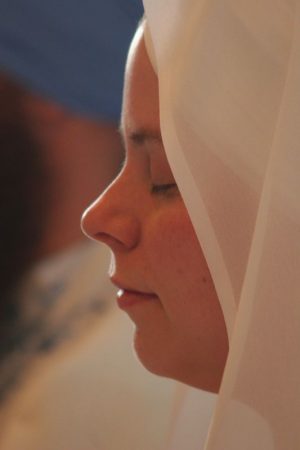 For many years, women from the 3HO and Sikh Dharma community would travel to New Mexico and gather together to live in tents for six weeks each summer to learn at the feet of Siri Singh Sahib, Yogi Bhajan.  Here Dev Suroop Kaur reflects on those times and the songs we sang together.

“Just remember, in the life of Guru Nanak, he did one thing, most wonderfully, which no other prophet or messenger of God has done:  against every odd he sang.  The power of the song and the smile is the most divine power a human can enjoy.  The beauty of Nanak, the Guru, is very unique.  He did not preach, he did not lecture.  He said, ‘Mardana, play the rebek.’  And Guru Nanak sang.” –Yogi Bhajan, Summer 1984

In all those wonderful years with Yogi Bhajan at women’s camp, singing was a common thread.  He would arrive at the big top to give a lecture and, invariably, we would end up singing. We were taught to use singing as a meditation, an antidote to depression, to inspire and reach people, to build and sustain the spirit of a nation.  We practiced how to sing from a place of inspiration and joy; we were encouraged to sing with conviction and strength.  He said that singing songs would bring a woman to her grace, strength, purity, and destiny.

“Make the songs, make the music.  Reach every heart.  Open up every heart. Bring to the conscious of the people the message of tranquility, grace, nobility and peace.” –Yogi Bhajan, Summer 1984 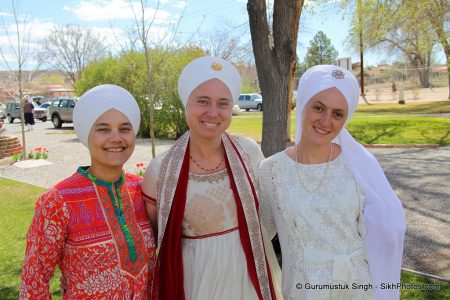 Often he would use a particular line in a song as the basis for delivering a special message, or teaching some specific gem, some kernel of truth. We would sing songs about the Khalsa spirit, women’s songs, 3HO songs written over the years, and children’s songs.  During the 4th of July, we would always sing patriotic songs: America the Beautiful and The Star Spangled Banner.  He said that a nation can never be destroyed if the people remember and continue to sing their songs.

“Remember, if you want to see a nation destroyed, two things must go:  the songs, and the smiles from the faces and the lips of the people.  As long as the people can smile and they can sing their songs, no nation can be destroyed. It is you duty as Americans to sing the songs and keep your smiles.” –Yogi Bhajan, Summer 1984

There were many songs that defined women’s camp.  The one that we all probably remember the most—and sang most regularly—was Noble Woman.

“Sing that song, Noble Woman.  We should actually inspire ourselves to sing and to learn the words.  The people who sing the songs of their glory, and the nation which sings the songs of its history can never die.  Remember that.  Singing is not an art or a pastime or a money-making venture. Singing is just to be one with God.  When you sing the glory of God, you are God.  Have no doubt about it.  So, my dear folks, learn to sing. . . . Just sing. It will purify you; it will bring you your destiny; it will bring you your grace.” –Yogi Bhajan, Summer 1982

Here are the words to that most noble song, Nobility: The Song of the Noble Woman. We hope these words continue to uplift you to your highest destiny, so that you can deliver the radiance and the grace of the noble woman to your daughters and their daughters and all those who come after you.

Nobility:  The Song of the Noble Woman 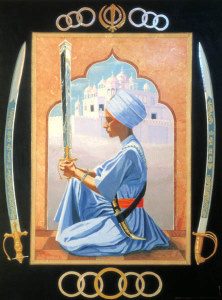 Noble is a virtue of the presence of God,
Greatest virtue that can be expressed.
Noble to everyone whoever they may be
Before the One God, equality.

Chorus
Noble is a virtue that affects every soul, as innocence affects the heart.
Woman has one virtue, to be noble ‘til death.
Living nobly is very blessed.  Living your truth is happiness.

A noble woman gives birth to a noble life.
Noble children and surroundings be.
A noble woman looks and lives nobility.
Even if she lives in poverty.  Chorus

And though a mirror’s distorted when it is cracked,
Noble habits build a noble life.
Don’t barter character values for benefits.
Noble one of God does not forget.  Chorus

Nobility is manufactured inside,
Training of exerting self esteem.
To see herself confirms a virtuous face,
Selfless living, grace through time and space.  Chorus

This piece was put together for the fabulous ‘I Am A Woman’ manual published by the Kundalini Reseach Institute.