“There is a concept in Sikh Dharma: “Cherdi Kala’—Rising spirit, continuous resurrection. Not just once, but all the time, every time, in every minute. It means you rise to the occasion as it confronts you. But rise! Be above it.”  Siri Singh Sahib, 11/19/1989

A tragic event on August 5th, 2012, that became a point of reference for Sikhs in America was remembered in Oak Creek, Wisconsin last month.

An outstanding pouring of support, kindness and respect came from well over a thousand people in a combined show of respect and love in several events over the long weekend.

Himmat Singh Khalsa with Sikh Dharma, M.S.S. Kirtan Singh and S.S. Shiva Singh Khalsa attended the first of the memorials on Friday, August 2nd, at the historic Milwaukee Federal Building & U.S. Courthouse, in downtown Milwaukee, Wisconsin, a two-story Courtroom richly detailed with carved oak paneling and trim on the walls and ceiling. Many of those present included elected officials and civil leaders, and the families of those who lost their lives that day and those injured, including Baba Punjab Singh, currently residing in a rehabilitation facility.

We were informed that a Ragi Jatha would play and Himmat Singh rose and helped place a clean white sheet on the floor for them. A shabad was played and a group of children clad in orange, wonderfully sang Wahe Guru Simran.

Before several sincere speeches, members of those families came forward and lit a candle in front of pictures of their loved ones in a very moving ceremony. Kirtan Singh had the opportunity to speak with several community leaders and families.

That weekend, Himmat Singh, Shabad Kaur, our son Amar Dev Singh and I were hosted most graciously by Narinder Kaur and Beant Singh Bopari, long-time friends of our family, in their lovely home. They helped found the Oak Creek Gurdwara, and Beant Singh is the Gurdwara Secretary.

Saturday, August 3rd, a bright, sunny day, much the same weather as a year ago, was a completely different experience! Over a thousand people, the majority non-Sikhs, gathered for the Cherdi Kala 6K Walk and Run at the local High School athletic field.

Gurpreet Singh Sarin, American Idol singer, played wonderful music as people took their seats in the football stadium and then led the National Anthem. After many inspiring speeches by family members of the victims, Lt. Brian Murphy, Major Kamaljeet Singh Kalsi, Robbie Parker (a Newtown father) and Jasvir Kaur (an exemplary sevadar) shared their words with the crowd. Jasvir Kaur reminded everyone of the vital need to banish hatred. The run then began with a Jakara and the roar of a nagara!

As the participants left the track to move out into the community on their run, a line of roaring motorcycles made a path for them, some with khandas on their leather jackets! In front of the bikes were pictures on placards stuck in the ground honoring each of the children killed in the Newtown school along with signs that proclaimed “We stand with you Boston,” and “We stand with you Newtown.” 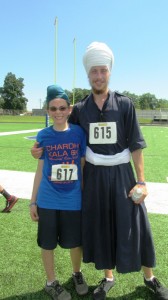 It was a beautiful sight as scores of people, some in running attire and caps, some in turbans, salvar suits and kurta pajama walking, running. Himmat Singh, Kirtan Singh and my son, Amar Dev Singh, all ran – the second run he did this summer while home from MPA. Shabad Kaur and I walked, ostensibly to take pictures of the others.

Then an afternoon of complementary roasted corn, baked potatoes, dhal and chai, jumping castles for the little children and sincere conversations.

Lt. Brian Murphy, the Police Officer who was shot 15 times and has survived, shared with us that his life has changed and he feels blessed with a new world view. We met his brother and wife as well. 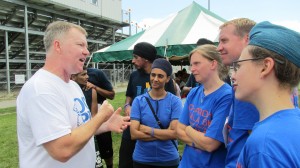 One of the most memorable and moving moments occurred as Lt. Murphy was speaking with the Parkers, Robbie and Alissa, whose little daughter, Emilie, was killed in Newtown, CT. He spoke in his now raspy voice, due to his injuries. His unforgettable and powerful heartfelt words to them were, “I would have taken a bullet for your daughter.” It was that feeling of greatness, of Cherdi Kala that pervaded every moment of this weekend. It reminds me of the Stephan Spender poem – ‘ I Think Continually of Those Who Were Truly Great.’

After the 6K on Saturday we had the honor to visit Baba Punjab Singh in his room. His wounds have paralyzed him from the lips down, but his eyes continue to fill the room with Guru’s Jot. While waiting to visit with him we had the opportunity to spend time with Major Kamaljeet Singh Kalsi and his family. He is a serving full turbaned Sikh in the U.S. Army. He shared some interesting details of his service with us and my son, who of course was very impressed.

Shabad Kaur and Himmat Singh offered and were welcomed by the family to do Sat Nam Rasayan for Punjab Singh. Everyone in the room, his adult son, his wife, Gurujodha Singh and Shiva Singh circled around in prayerful silence as they simultaneously sat and touched his arm. I was so proud as a father when our 13-year old son Amar Dev Singh, who had been sitting quietly, rose and stood next to me with his hands in prayer pose. He was even moved by the energy.

On Sunday, August 4th, the Gurdwara was packed. There were TV crews, elected officials including the Governor, many non-Sikhs and Sikhs from all over the country. Rousing kirtan and speeches. We had the blessing of playing Kirtan at the Oak Creek Gurdwara. I would say it made quite an impression to have us up there with Kirtan Singh leading the shabad with an accordion and Gurujodha Singh on his drum.

Gurujodha Singh spoke and Kirtan Singh read the Proclamation from Sikh Dharma filled with the most inspiring words. (The Sikh Dharma proclamation will be in our next post on Sikhs and Seekers!)

We were unable to stay in Oak Creek for the Monday night candlelight vigil, which also drew a huge response from the community. It was an incredible weekend that truly embodied Cherdi Kala. It is an honor to be counted among a Saadh Sangat that manifested such love and resilience. This is what the teachings of our Gurus, introduced to us by the Siri Singh Sahib, who constantly urged us forward to learn how to live Keep Up! Which equals Cherdi Kala!