It was a sublime feeling to be sitting in the Gurdwara of the first Siri Guru Granth Sahib in Iceland, reading from it in the very early hours of the morning.  A wave of gratitude washed over me as I felt myself a part of this rich, vast, living tradition.

Bringing the Guru to Iceland started out as a deep need in my being that I could not ignore.  Once that was settled it became very clear that we needed to start with an Akandh Path.  If you ask me why, I have no tangible answer; it was just something that needed to happen.  The steps from committing to installing the Guru to finishing the Akhand Path were many and I had really solid backup – from Sikh friends in New Mexico and London and great help from my husband and yoga friends – but the strongest element in all of this was faith.  Faith that we should and we could, and we did!

It is a very young Sangat here in Iceland, no Sikhs but many seekers. About 40 people were willing to answer the calling of their soul and participate, more wanted to join once word got out about how great it was.  Everyone reading and doing seva felt on some level that this was a true blessing for them personally as well as a blessing for the community as a whole.  It was a really good feeling to sit and talk with all the people that came to read or just to be; it elevated our Sanghat and brought us closer together.

The calling is still strong and now more people feel it – the need to meet the Word of the Guru in this powerful way.  Our 2nd Akandh Path will start on October 31st.  If you feel the calling, you are welcome to join!

I will leave you with the very first Hukam we took for our community:

He Himself imbues us with His Love, with effortless ease. Through the Word of the Gurus Shabad, we are dyed in the color of the Lords Love. This mind and body are so imbued, and this tongue is dyed in the deep crimson color of the poppy. Through the Love and the Fear of God, we are dyed in this color. || 1 || I am a sacrifice, my soul is a sacrifice, to those who enshrine the Fearless Lord within their minds. By Gurus Grace, I meditate on the Fearless Lord; the Shabad has carried me across the poisonous world-ocean. || 1 || Pause|| The idiotic self-willed manmukhs try to be clever, but in spite of their bathing and washing, they shall not be acceptable. As they came, so shall they go, regretting the mistakes they made. || 2 || The blind, self-willed manmukhs do not understand anything; death was pre-ordained for them when they came into the world, but they do not understand. The self-willed manmukhs may practice religious rituals, but they do not obtain the Name; without the Name, they lose this life in vain. || 3 ||The practice of Truth is the essence of the Shabad. Through the Perfect Guru, the gate of salvation is found. So, night and day, listen to the Word of the Gurus Bani, and the Shabad. Let yourself be colored by this love. || 4 || The tongue, imbued with the Lords Essence, delights in His Love. My mind and body are enticed by the Lords Sublime Love. I have easily obtained my Darling Beloved; I am intuitively absorbed in celestial peace. || 5 || Those who have the Lords Love within, sing His Glorious Praises; through the Word of the Gurus Shabad, they are intuitively absorbed in celestial peace. I am forever a sacrifice to those who dedicate their consciousness to the Gurus Service. || 6 || The True Lord is pleased with Truth, and only Truth. By Gurus Grace, ones inner being is deeply imbued with His Love. Sitting in that blessed place, sing the Glorious Praises of the Lord, who Himself inspires us to accept His Truth. || 7 || That one, upon whom the Lord casts His Glance of Grace, obtains it. By Gurus Grace, egotism departs. O Nanak, that one, within whose mind the Name dwells, is honored in the True Court. || 8 || 8 || 9 || 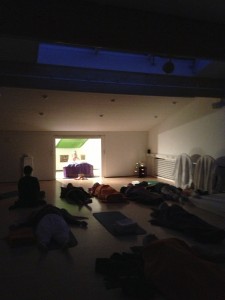