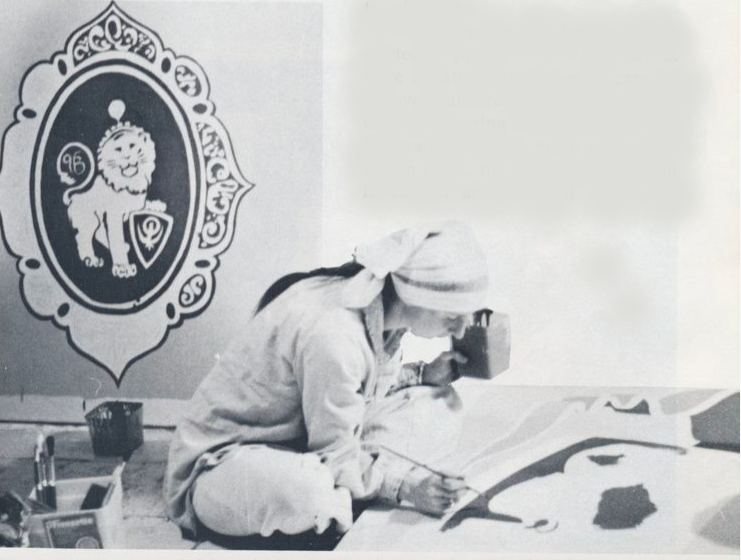 This article was originally published in a 1980 issue of Beads of Truth and was written by S.S. Hari Mandir Kaur Khalsa

Only he dances who dances in the perfect harmony of spirit.

A few members of the Khalsa Visual Arts Association had been grumbling about the hasty execution of the Sarkar e Khalsa sign over the Gurdwara at Solstice. Yet none of us was prepared for the Siri Singh Sahib’s reaction:

“We must have a better sign than this. We are surely better than this. The best artists in 3HO shall paint a new sign, and I want it done in 72 hours . . . you have 72 hours to complete it!”

After overcoming our initial surprise, everybody realized that this was the challenge the artists had been waiting for: a focus for our creative energy at the Solstice site. It was immediately apparent to us all that the Guru was the only artist great enough to do such an immense job in such a short time. It would have to be a group effort.

Our hearts were willing for the challenge, but some of us still wondered, how can 8 – 20 artists all work on one project and not create total chaos? We put our reservations aside, however, and started making plans for what was to become an all-night marathon paint-in — an unforgettable experience in group consciousness.

Of the three days we had for completion of the sign, two were lost in organizing and buying equipment. Requisitions for money had to be got, trips to Santa Fe had to be made. The sign, which was to be 3 X 17 feet, required canvas that could not be acquired in Española, and so two of our precious days slipped away in purchasing materials. 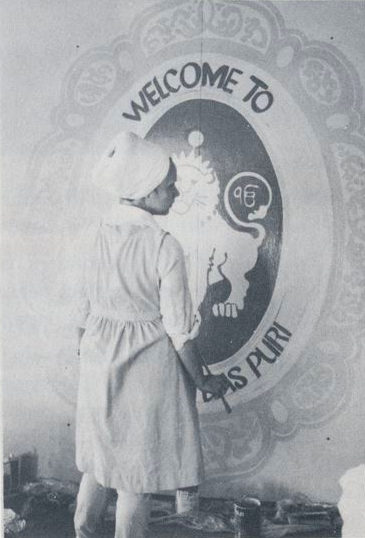 By the time the materials were gathered and the stretchers were built, there was only one evening and one night to go until “D” day. A meeting in the Staff Office (which was to become our studio) further delayed us as did the general confusion of organizing the canvas, the stretchers and the initial painters. “What does Sarkar e Khalsa mean?”, several people asked as they rolled up their sleeves. At 9 p.m., the empty stretcher bars gleamed at us with naked challenge. There was nothing to do but say a prayer and begin.

It is difficult to pick out the most memorable events of that night, but a few memories stand out vividly.

The Siri Singh Sahib’s seals were to be painted on either side of the Sarkar e Khalsa scroll, and to do this we  needed the precision of a projected image. Bracing the canvases on bricks and balancing them precariously against the side of the Gurdwara, we tried to steady the image that came from the projector. Unfortunately, the projector was set up inside the Staff Office which had a very shaky floor. Every time someone walked across the floor the movement of the projected image jiggled and slipped. Group effort became the by-word right from the start!

Two people drew the seals — their charcoal pencils meeting shakily at the top and bottom of the Lions. Two more people steadied the projector, while one person ran back and forth entreating everyone else in the staff room to stand still. “Don’t move, don’t walk, don’t breathe!” Someone else was dispatched to ward off the curious who were coming over from evening entertainment.

It was a great scene when we finally started to paint. Two to four artists were squatting around each canvas; we were all crowded into the Staff Office discussing styles and ideas for the paintings with great gusto. By 11 p.m., the painting had begun in earnest and different styles and  directions were beginning to emerge from eight different creative minds. Conflicts met final resolution in a sort of veto-vote — whoever felt strongest about an idea and could state a strong case for it usually persuaded the group, sometimes to the dismay of others. Yet all issues were resolved and we forged ahead. No one said, “we can’t do it,” or “this is impossible.”

By 2 a.m., all of the major areas of the 51-square-foot painting were covered and the images began to take on clarity. Stuffed with oranges and bleary-eyed from painting we began to see some of the funny discrepancies in our work. We howled with laughter at the lions who had way too much personality, and they smirked at us ridiculously; the obvious differences in their character (as they had four different creators) was now all too clear. The calligraphy that had started out looking all right now seemed imbalanced and out of scale. The scroll was itself too wide and the Adi Shakti too dark and too small. To complicate matters, the electricity failed as we were contemplating these catastrophes and left us in a total blackout. As we joked and stumbled around trying not to touch anyone with our paint-sticky, numb-from-painting-fingers, we realized with a certain awe that a lot of the sign had to be repainted.

With the return of the lights an hour later, we hauled the three canvases into the pavilion and propped them against the stage. We huddled in the pre-dawn darkness surveying our work. Many things had to be changed. We’d better get busy.

New recruits joined the troops after sadhana. The search for a calligrapher began in earnest. Parts of the sign were painted, repainted and  painted again. The lions were repainted three times, the Adi Shakti, four. The calligraphy was scraped and repainted. Somebody came in to do the border taping and painting. Egos flared over the changes and were soothed as the results showed improvement.

And, miraculously, something began to emerge that none of us had fully envisioned; the painting was taking on a life of its own. It was making demands of us that no one anticipated and giving us results beyond our expectations. We had started out to work on a decorative sign; we were now seeing a work of art emerge. It was a work that no one of us could have done alone. It was an entity in itself, a product of prayer, sweat, punctured egos and Chardi Kala — a symbol of purification and artistic unity.

Before White Tantric that afternoon, the sign was hung in its complete state. When the Siri Singh Sahib saw it, he totally overwhelmed us with his approval. He exclaimed, “Oh God, now I can die in peace.” We sat in wonder as the Siri Singh Sahib proceeded to tell us the meaning of “Sarkar e Khalsa,” “Government of the Pure Ones,” and its significance for us and our future generations.

Although we had worked on those words all night, we had scarcely grasped their true importance. We had thought we were working on a sign for the Siri Singh Sahib. Now we realized that he was (is) working on a nation for us. He is helping us to see our greatness and our destiny. He is helping us to build our identity as the Khalsa nation and to help us build our history. “Sarkar e Khalsa” stands manifest as a testimony of our hope for the future and a witness of the pure Khalsa Spirit.

This “sign” still sits above the gurdwara at Ram Das Puri for all to see when they visit during Summer Solstice Sadhana Celebrations.

This article was originally published in a 1980 issue of Beads of Truth and was written by S.S. Hari Mandir Kaur Khalsa

View Harimandir Kaur’s murals and other artwork at harimandir.com