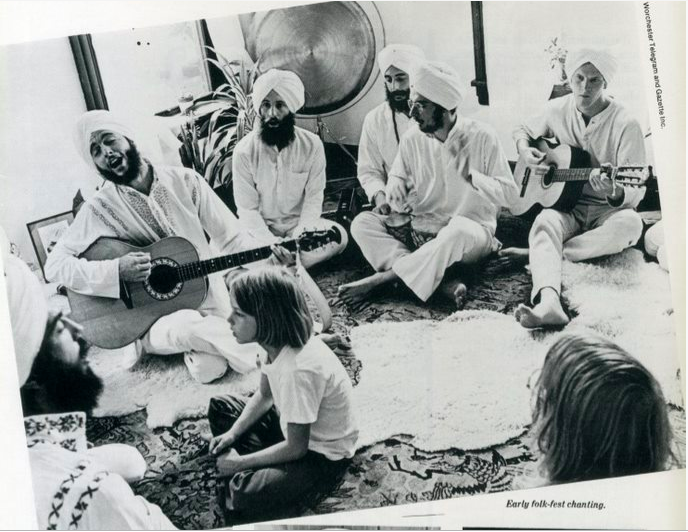 Here are excerpts from an article originally published in a 1979 issue of Beads of Truth.

To recall the songs of our past is to retrace our history. Our music started simply when we were first learning the postures and mantras of Kundalini Yoga. How many among us remember the simple strains of “Ek Ong Kar Sat Nam Siri Wahe Guru,” sung a cappella, which we learned during our first classes with the Siri Singh Sahib? Our American ears, accustomed to rich harmonies, soon led us to divide the simple melody into alternating men’s and women’s parts, and then into multiple voicings. One melody led to another, and soon there were a great variety of tunes through which to sing the praises of Ek Ong Kar.

During our early years, when young people of the Woodstock Nation were flocking in great numbers to various spiritual paths and teachers, our family shared in the wealth of inspirational songs and chants that were being sung by our brothers and sisters in spirit. We sang “La Ilaha Il Allahoo” with the Sufis, “Om Shree Ram Jai Ram” with the students of Swami  Satchidananda, and “Shalom, Shalom” with Rabbi Shlomo Carlbach. There were heart-opening, devotional songs of Swami Krjyananda like “Listen, Listen, Listen” and “Door of My Heart,” and the ever contemporary Shaker hymn of a century past, “Tis a Gift to Be Simple.”

But of all of these divine melodies, one of them, written by a British musical group called the Incredible String Band, was adopted by us forever. It happened that the Siri Singh Sahib had a vision in which he saw the children of the Age of Aquarius being mercilessly gunned down. As they went to their deaths, they sang the song,

“May the Long Time Sun shine upon you,

All love surround you,

And the Pure Light within you,

Guide your way on.”

At the Siri Singh Sahib’s request, these words became our daily prayer with which we closed every yoga class and every gathering. 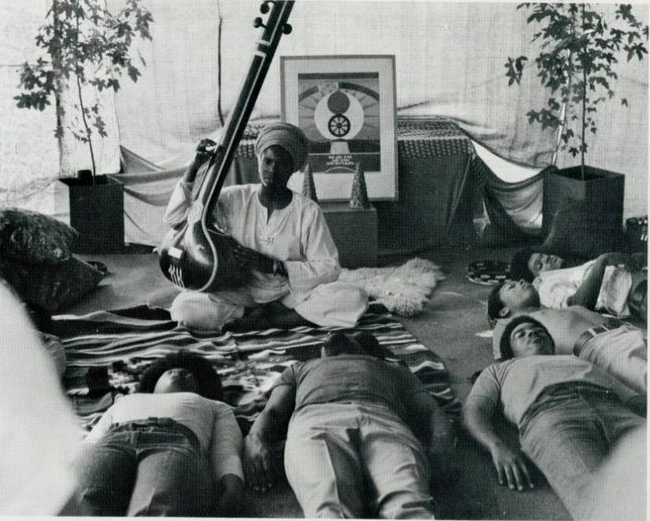 In 1971, the Siri Singh Sahib led a group of eighty Americans to India to visit the land of the Gurus and, especially, the House of Guru Ram Das, the Golden Temple. In response to his prayers to Guru Ram Das, a mantra was revealed to him, “Guru Guru Wahe Guru. Guru Ram Das Guru.” It was sung in a sweet and plaintive melody, and its repetition with love brought protection in times of danger, healing in times of sickness, and solace in times of distress. Naturally, as our family musicians themselves turned for strength and support to Guru Ram Das, they began to sing his mantra in new melodies which they played from their hearts. Each morning, Guru Ram Das Ashrams across the country were filled with the haunting, joyful or soulful strains in praise of the Fourth Guru.

After three years of learning and growing under the guidance of the Siri Singh Sahib, we had acquired a strong sense of our own identity as a family and an emerging nation. Mukhia Singh Sahib Livtar Singh Khalsa wrote:

“And when the tests begin, it seems to take so long.

Don’t you forget that you’re a hundred thousand strong.

And just ’cause you don’t remember, don’t mean that it’s a lie.

This family’s been sailin’ together most of our lives.

And when we’re together we can make such a sound,

A group of musicians on the East Coast including Gurushabd Singh, Sat Peter Singh and Mukhia Singh Sahib Livtar Singh Khalsa had formed a group called Sat Nam East, while a similar group on the West Coast, including Mukhia Sardarni Sahiba Krishna Kaur Khalsa and Mukhia Singh Sahib Guru Singh Khalsa formed Sat Nam West. These groups released a series of cassette tapes which were circulated throughout our family and provided hours of enjoyment and inspiration.

Despite the meager recording equipment and lack of professional recording conditions, they managed to convey the real spirit of our family as it grew with the tests of the times.

Our music was not without humor. Using old rock ’n’ roll standards as the basis for his clever lyrics, Gurushabd Singh had us all laughing and dancing to the likes of “Crazy Shakti,’’ “Long Tall Yogi,” and “What’s Your Name (Is it Krishna or Vishnu)?’’ It was fun and healthy to laugh at our lifestyle, and Sat Peter Singh really knew how to play that old rock ’n’ roll guitar!

Our family proved to be a treasure box of musical talent. There emerged some incredibly sensitive and gifted songwriters like Gurudass Singh, Singh Kaur, and Sardarni Sahiba Bibi Bhani Kaur Khalsa, who seemed to pour forth unending streams of touching and inspirational songs. But there were others less well known –singers, guitarists, flutists, pianists — who, in their own ashrams and in their own regions, carried the faith of Sikh Dharma by bringing music to the people.

So many of the songs and melodies which we now hold dear were written by these little-known songwriters who were never recognized, nor asked to be recognized, for the divine melodies sent to them by God. Indeed it seemed that every ashram had at least one resident musician, singing its members awake in the morning, leading them in songful prayer, and accompanying them in joyous celebration. 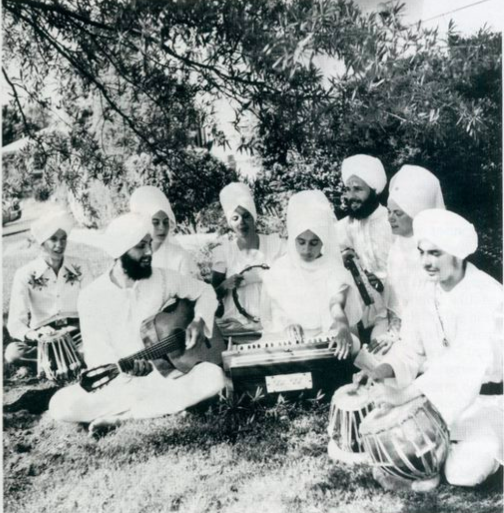 A source of pride to us all, in 1973, some of our finest musicians from east and west joined together to form the Khalsa String Band and to produce the record album, Spiritual Nation. Led by Sat Peter Singh, the group toured the country, playing concerts in colleges, churches, parks and auditoriums, until recording the cassette album, Sons of the Tenth Guru in 1974. The stirring lyrics recorded on that album reflected our growing awareness of our identity as the Khalsa, sons and daughters of Guru Gobind Singh, with a heritage and a history which extended back hundreds of years beyond the limited spans of our lives.

The songs seemed to say: “What was past is occurring again. What was fading from view is now reborn. The spirit of the Gurus is alive among us!”

The experience of the past-become-present in our lives was enhanced and fostered by the introduction into our lifestyle of what we now know to be an essential ingredient of our Dharma. When we first heard Gurbani Kirtan played by Vikram Singh in 1972, few of us realized its depth and power. It may have seemed strange to us children of rock ’n’ roll, jazz and American folk music, but it was meant for us, and so it drew us back again and again, deeper and deeper into its inner vastness.

In 1973, a group of American Sikh women returned from India. To the surprise of all, they had learned to do kirtan. Their voices were like those of little girls or like angels as they sang with childlike innocence, “Jo Mageh...” and “Too Meraa Pitaa…” It touched our hearts, and soon our whole family was learning to do kirtan. Harmoniums and tablas took their places next to the guitars and dulcimers and flutes, and “SA-RE-GAs” became nearly as common as “SA—TA—NA—MAs” in our 3HO Ashrams.

Gurbani Kirtan was both a powerful and universal mode of musical expression. The Guru’s words, cut from the vein of etheric gemstone known as Naad or Sound Current, pierced the deep layers of our minds, while the enchanting melodies opened our hearts. People who had never sung or played musical instruments before found creative fulfillment through Gurbani Kirtan. Indeed, entire lives were changed through the power of Gurbani. The weak became strong; the sick were healed; people who had long remained silent became powerful spokespersons for Truth and righteousness.

Some, like Vikram Singh, learned to master the powerful and technically effective ragas of the Siri Guru Granth Sahib. They will be our guides and teachers for years to come. Others learned the sad and sweet melodies taught to them by Sardarni Amarjit Kaur, (and others).  Whichever styles of kirtan we chose to sing, the strains of Gurbani served as road maps for the soul, all of them leading to our destination, our home at the feet of the Guru. 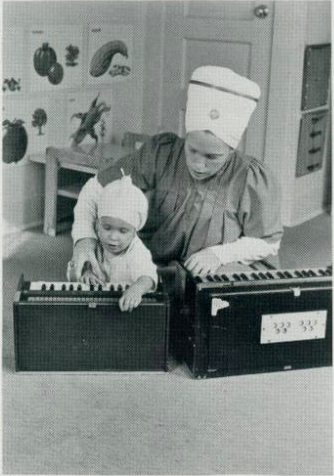 It isn’t difficult to meet a child’s natural rhythm.

Ten years have passed and our music has grown more powerful, more sophisticated and more uplifting. With each year we have discovered more and more talented songwriters in our midst, and more and more accomplished players to praise God in song. We now have fine equipment and skilled engineers to record and distribute our musical efforts.

The possibilities and potentials for the future are limitless. How many songs of the Khalsa are waiting in the ethers to be discovered? Whatever the future holds, the songs of our first ten years are our treasure forever. They are the guardians of our spirit, to be sung again and again, carrying us across all the trials and obstacles that have been set in our way. They are the signposts on our path, marking the road where we have been, and pointing the way to our future.- 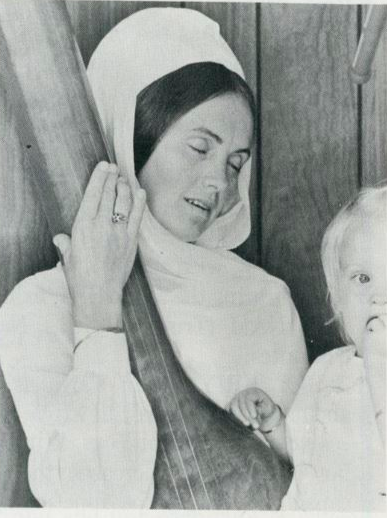 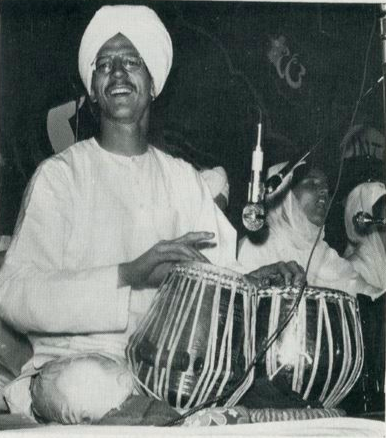