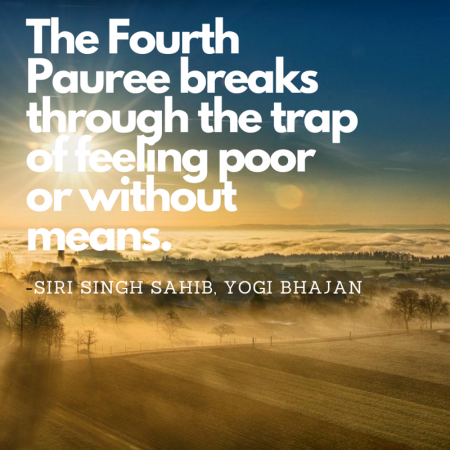 The Fourth Paurī blesses those trapped in feelings of poverty and lack of means. It blasts through the trap of these feelings like a thunderbolt.  – from the Teachings of the Siri Singh Sahib, Yogi Bhajan (1)

After introducing and developing the notion of hukam, Gurū Nānak invites us to a new relation to the divine, a new kind of exchange with God.

One of the main manifestations of our ego is thinking that we are doers. The very word Gurū Nānak uses for “ego” says it clearly: in its Sanskrit etymology, ahankar means “me-doer” or “I am the maker”.

But as active as we are, we are not the doers. As creative as we may be, we are not the creators: we remain creatures, created beings. We, as well as everything in our lives, are manifestations of a supreme divine will, of a hukam. That reality is being regularly reminded to us by the teachings of Sikh Dharma, because of the tendency of the ego-mind to forget or to ignore it.

So in the fourth Paurī, Gurū Nānak adds one layer to the realization of our true relation to the Divine: the Universal Consciousness is the One that gives and we are the ones who take (while there is very little we can give).

We beg loudly, “Give! Give to us!” And the Giver keeps on giving.

We enjoy, we consume and we transform what is already given to us by the great source of all gifts. I might plant a seed and water it, but it’s Mother Nature who created that seed, and created the soil and its nutrients and micro-organisms, and made that nurturing water as well. It’s the sun that sends its heat and energy to call that seed to germination and growth. Did I create anything here? No, but I will eat the fruits of that plant. I might cut the tree, shape its wood into planks and make a table from it. But again, I didn’t grow that tree, nor did I create the metal that was shaped into saws and tools. It is all given to us, as well as the air we breathe, the light we see, the earth we are walking on, and all the beings we are interacting with. The whole Universe, including ourselves, is Ek Ong Kār: “the One continuously unfolding into its manifestation”. The world is a permanent act of kind giving from the Giver (and further in the JapJī  Sāhib, the 25th Paurī mentions how we even deny receiving anything).

All you have taught your children is “Get ‘A’ grades! And become a great taker” You have never taught them to be the givers. Those who are not givers know nothing about God. (2)

Each one of us receives just what they need in this life: we all get enough, and even, maybe, more than enough: as Siri Singh Sahib, Yogi Bhajan said, “There is no lack of supply”! The problem is that we have learned to take a lot for our instincts, to take for our animal needs, to take for our ego, but we haven’t learned to give. Now Gurū Nānak challenges us to make a shift: instead of taking and taking again, “piling up urban goods” (as mentioned in the first Paurī), would there be anything that we could give? If we receive as we ask, and still aren’t happy, what about trying something new, considering that maybe true happiness doesn’t come from taking, but from giving?

We have come on this Earth to give, not to take.

Give and you will be given virtues.

Let’s be honest: God, all in all by His/Her-Self, doesn’t need anything. Just like a mother doesn’t need a pasta necklace, or a father, a “Best Dad Ever” new tee-shirt. But such gifts are the most touching of all presents, because they express the love and gratitude that the child is old enough to feel now; that very little thing that the child can give in return regarding to all that he or she receives. They manifest that the child has grown from being exclusively an instinctive taker to becoming a conscious giver. It is truly the sign of the beginning of a spiritual maturity.

And Gurū Nānak says, the best you can give to the Beloved (that is the meaning of pi-ār) is to wake up early and to meditate on your spiritual identity:

In the Amrit Vaylā (the ambrosial hours before dawn),

meditate the True Name and its Greatness.

Somehow, God isn’t asking anything else from us but that we give time and attention to our spiritual consciousness. That is the only purpose of a human incarnation.

By the grace of karma, the robe of this physical body is obtained.

Under His Gracious Glance, the Gate of Liberation is found.

Receiving what we need to grow in awareness in this lifetime, that is also called karma. In Gurū Nānak’s words, karma is not only the result of past actions according to the law of cause and effect. Karma also means “grace, kindness”. Here Gurū Nānak insists on how precious this human incarnation is. Body and mind are God-given, and they are described here as a costume, an opportunity to play a role on the theater stage of time and space. Coming into this world with the gift of a human life is an opportunity to give time and attention to our true selves, to grow in awareness and to find liberation. So the challenge is: play the game in such a way that it will set you free from the game. That is the very definition of Dharma, the righteous way of life. 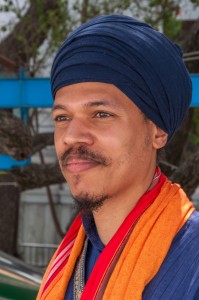 Ram Singh came in touch with Kundalini Yoga as a child in Togo (West Africa) in the early eighties. Since then he never stopped exploring the unfathomable richness of the teachings of Yogi Bhajan.

After years of teaching in contexts where Yoga is still little present – a center for drug addicts, a group of elderly students, an institution for autistic teenagers, a nursing training school, etc. – he and his wife Gururavi Kaur founded in 2011 the Dharamsal Yoga Center in Toulouse, France, dedicated to the teachings of Kundalini Yoga.

A singer and a musician, he is the author of three albums of mantras of Kundalini Yoga and sacred songs from the Sikh traditions. And as a lover of Sikh sacred scriptures, Ram Singh teaches courses on Jap Jī Sāhib. After translating the JapJī and the whole Nitnem – the collection of Sikh daily recitations – into French, he has recently committed to complete the translation of the whole Sirī Gurū Granth Sāhib.