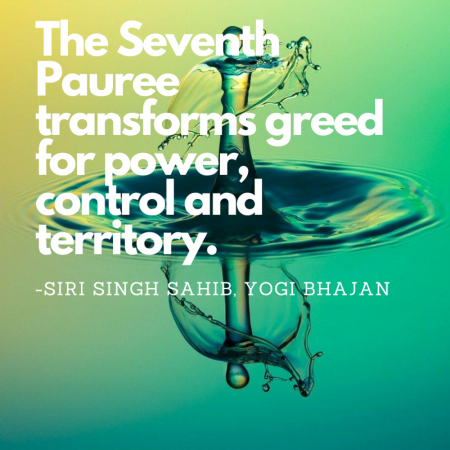 “When you suffer from greed, madness for power, overbearing expansion and the need to control, when you become trapped in your territoriality, the seventh Paurī will heal you.” – from the Teachings of the Siri Singh Sahib, Yogi Bhajan (1)

Even if you could live throughout the four ages, or even ten times more,

In this Paurī we are learning about good and bad and judgment.  Gurū Nānak makes his point with a lot of hyperbole:

IF a person were to live for ten times four ages, AND be known throughout the nine continents, AND be followed and praised by everyone, BUT IF this person does not receive God’s Nadar or glance of grace, THEN no one cares about him, AND he is a worm among worms, AND even contemptible sinners have contempt for him.

The next-to-the-last line of the Paurī says:  “God blesses the unworthy with virtue, and bestows virtue on the virtuous.”  So we can be blessed with virtue whether we are good or bad.  As usual in Jap Jī, we are brought to a place of non-judgment of ourselves and others.

And the final line says  “No one can even imagine anyone who can bestow virtue upon Him.”  So where do we stand in relation to God?  We stand in humility and acceptance in the presence of the Unknown.

The Siri Singh Sahib, Yogi Bhajan said this Paurī will heal you.   Non-judgment, humility and acceptance are healing ways of being.

This article originally appeared as part of the 40 Day Sadhana of Japji Sahib, hosted by Sikh Dharma International, Spirit Voyage and 3H0. 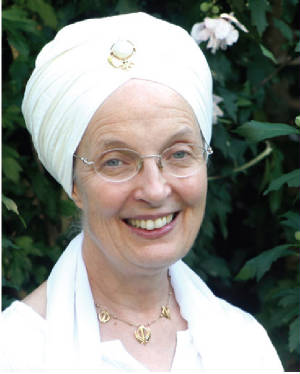 Siri Sevak Kaur is a long-time student of Kundalini Yogi and Yogi Bhajan who has had an equally long-time attraction to the sacred language and music of the Sikhs.  She lives at Guru Ram Das Ashram in Millis, MA, and teaches teleclasses in Gurmukhi and Jap Jī Sahib to students across the country and around the world.  Her website is:  SiriSevak.com