“The twenty-second Paurī brings victory in legal battles.  It gives you the strategy.”

In this Paurī, Gurū Nānak Dev Jī offers us two unique perspectives. Let us start with the first one in which he describes the vastness of God’s creation and the Universe. His poetry depicts infinite worlds beneath worlds and above them countless other celestial regions, vast canopies of skies.

That may not sound very innovative today, but realizing that Gurū Nānak composed Jap Jī somewhere between the end of the 15th until the beginning of the 16th century, that idea becomes nothing less than truly groundbreaking as far as western science is concerned. Let us not forget that until the very end of the 1500’s the majority of scholars in Europe subscribed to the Aristotelian geocentric model in which the Earth was the center of the universe and that all heavenly bodies revolved around it. In 1616, the Inquisition declared Galileo’s heliocentrism to be formally heretical.

In many ways, Gurū Nānak Jī was an avant-gardist. He also anticipated what took centuries of studies to unravel: the energy power concealed in the matter and the parallel between energy fields and the universe itself. Gurū Nānak not only describes the dimension of our Universe in this Paurī, but he also hints at the very fact that matter and energy are integral elements of reality.

See what Carl Sagan said in Cosmos on that subject: “Within it (the electron), organized into the local equivalent of galaxies and smaller structures, are an immense number of other, much tinier elementary particles, which are themselves universes at the next level and so on forever – an infinite downward regression, universes within universes, endlessly. And upward as well.” (2)

Gurū Nānak explains how useless it is to keep on trying to count down the planets and celestial parts in the Universe because God creates endlessly. We can only talk about God’s greatness and do nothing else.

But there is another unique perspective in this Paurī. Gurū Nānak also sheds his light on a very familiar human dichotomy that brings a lot of suffering in our lives. It is a classical aversion to darkness and our seeking nature passionately for light. It is tough for us humans to see light and shade as intermingled parts of the same reality. We suffer when things are dark and down, and we love when things are light and up. The Siri Singh Sahib Yogi Bhajan Ji spent his life teaching us to train our minds to see this paradox as a natural condition of life on this planet, wherein light and darkness became an essential condition of God’s play to bring about learning, emotional and spiritual maturity and evolution in life.

Untrained, our subconscious mind and ego conspire to allegedly defend us utilizing wounds of past trauma and pain to make us run from difficulties and difficult circumstances, setting us instead in a race for immediate pleasure and comfort. It is undeniable though that, within the roughness resides the necessary scrub we needed to get smooth and clear, strong and steady, grown up emotionally and spiritually.

In this Paurī, Gurū Nānak conveys his message of hope and reality: even in the darkest underworlds there are hundreds of thousands of open skies over them. If you look down to darkness, you will only see obscurity. Looking one-way inside that shady spot, you will only get that as reality.

Instead, as the Siri Singh Sahib Yogi Bhajan said, if you “raise your altitude you will get the new attitude.” (3)

So, take that dark condition into perspective and you will find the open light pouring down from the expanses of firmaments. Only then your reality will be complete.

(3) The Teachings of Yogi Bhajan. 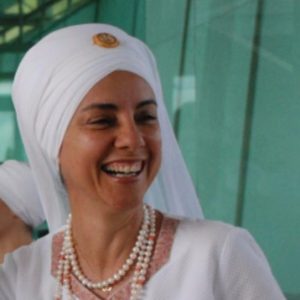