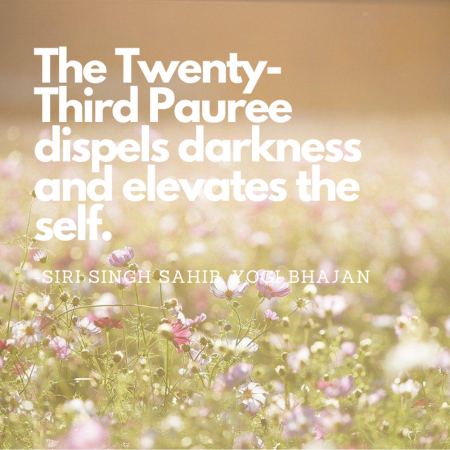 “The twenty-third Paurī dispels darkness and elevates the self.”

The faithful praise God over and over again, reciting mantras, prayers, and hymns. We try to understand God by better understanding Gurbāṉī, through meditation, devotional service, and reflection. All who sing of the Wonderful One, who describe God in so many countless ways – with all the devotion that fills their hearts – how great is their understanding? Many millions of souls have spent thousands of years describing God. Who has successfully done so? How soon will the job be done?

Can a drop of water comprehend the vast ocean? However many words we use, and in whatever combination, we are only able to express that which we know from our own experience and perspective. How can an ant comprehend an elephant? A grain of sand fathom the shore? A mote of dust dazzling in the sun, comprehend the light it reflects? Each flicker of understanding brings a new level of amazement and further realization of the incomprehensible expanse we seek to know.

Rain falls and forms rivulets. These turn into streams, which flow into mighty rivers, and which ultimately pour into the sea. None knows their destination, only that they must flow and seek it. And, having found the sea, they still know not its expanse, as they are no longer a raindrop, a rivulet, a stream or a mighty river. However small or great they may have once been, when merged in the vast sea, that identity exists no more.

Just so, ants crawl. Beggars beg. Great kings possess vast empires and amass unimaginable wealth and treasure. All the countless incarnations of souls, flowing in the will of the Divine, playing their assigned roles, ultimately leave this world behind. All the wealth, power, ego, and possessions strived for and held with pride, in truth, have no value or meaning.

For example, a man known as being politically ruthless achieved much power and wealth in his lifetime and ultimately succumbed to cancer. During his illness he realized this simple truth. Shortly before his death he wrote of “the spiritual vacuum at the heart of American society,” a vacuum that he had not identified until he realized his own mortality. He continued, “I acquired more wealth, power and prestige than most. But you can acquire all you want and still feel empty… It took a deadly illness to put me eye to eye with that truth…” (2).

How is this vacuum filled? What is true wealth?

Even having amassed the greatest fortune, or being the mightiest ruler, the most famous entertainer, or the best poet… these things have not even the value of an ant when compared to one who is spiritually overflowing, whoever reflects on the Wonderful One, whose mind is attuned to the raindrop’s journey, and is, in life, awash in the nectar of the sea, flooded with the cosmic flow, and drunk and drowned with God’s Name.

Through this understanding I know that the role I play in this life is exactly perfect. There are no faults or deficiencies in my life or in my self and there is no cause for a dark outlook or to feel that I am a victim of circumstance. These feelings are the true Maya! For, when we are attuned to the flow and remember the Nam, there are no doubts and there is no darkness; only an elevated sense of overflowing bounty, completeness, and oneness with the Flow. This is the true Wealth! 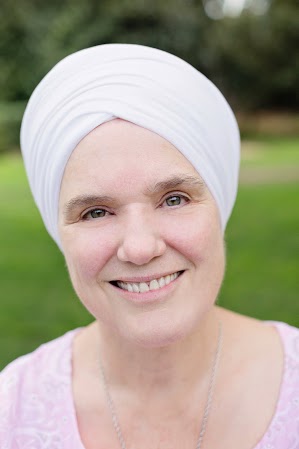 Siri Ved Kaur is known in the worldwide Sikh Dharma community for her spirited gurbani kirtan and Morning Glory sadhana meditations recording, her exquisite recitation of Guru’s bani, and for having taught hundreds of seekers to read and sing from the Shabad Guru. She is also the author of From Vegetables with Love: Recipes and Tales from a Yogi’s Kitchen, numerous food columns in “Beads of Truth” and “Aquarian Times” magazines, and is the founder of the True Tales memoir writing group and the OurTrueTales.com spiritual memoir website. After being an active member of the Guru Ram Das Ashram Community in Los Angeles for over 35 years, Siri Ved and her husband, Gurujodha Singh, moved to Bakersfield, California in 2008, where she is the Risk Manager at the County medical center and serves on the Executive Board of the Cal State University Bakersfield Alumni Association.