Civil rights leader Reverend Dr. C.T. Vivian is known for his work with Dr. Martin Luther King Jr. during the civil rights movement in the 1960s. He was a Freedom Rider and organized sit-ins and other non-violent protests against racial segregation in the South. As a member of the Executive Staff of the SCLC (Southern Christian Leadership Council) he marched with Dr. King in Selma, Montgomery, Chicago, Birmingham, and Washington, D.C. He worked as an organizer for the voter registration drive in Selma, a movement that was the catalyst for the 1965 Voting Rights Act. 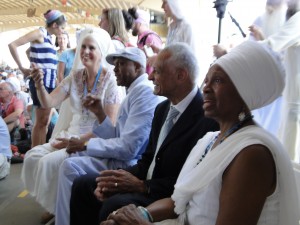 Click here to find out more about the annual Peace Prayer Day event at Ram Das Puri in the mountains outside of Espanola, NM, USA