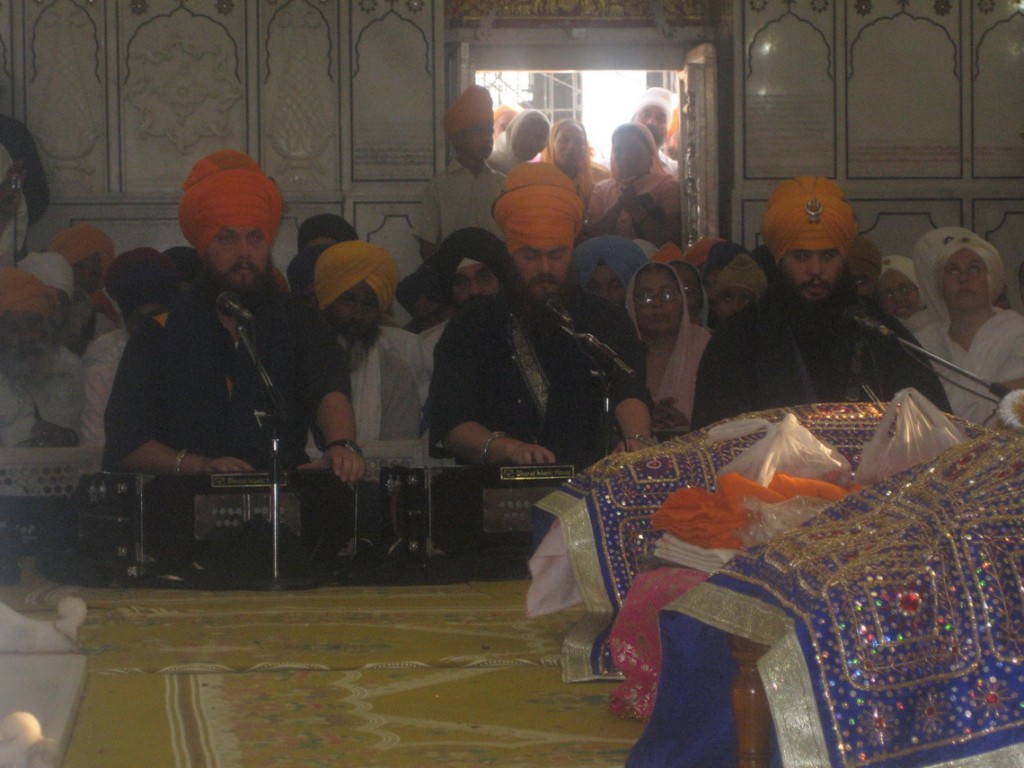 This article was originally published in 2008 about the gift brought to Takhat Hazur Sahib in India.

In honor of the 300th celebration of the Guru Gaddi of the Siri Guru Granth Sahib and to commemorate the establishment of the Khalsa in the West, Sikh Dharma International presented a Kalgi crown jewel turban decoration called “The Spirit of the Khalsa” to Takhat Hazur Sahib in Nanded, India on October 28, 2008.

After receiving the gift, Jethedar Jotinder Singh blessed the group who brought the gift with saropas and garlands of flowers.

The commemorative Kalgi was hand-crafted by famous Beverly Hills jeweler Angelo Castelo. Castelo served as the jeweler of choice among the Beverly Hills elite for many years. One of his clients was the Siri Singh Sahib, Yogi Bhajan, who brought the teachings of the Sikh Gurus to the West. Castelo crafted many beautiful Sikh-themed pieces of jewelry for the Siri Singh Sahib. Because of their long-standing friendship, Castelo was asked by Sikh Dharma International to craft this piece.

The piece created by Castelo replicates the shape of the original Kalgi, but with a distinctive, modern flair. The piece is cast in gold, set with blue topaz and diamonds, and mounted for display on a beautiful silver base. In the tradition of gemology, gold channels the energy of the sun, silver channels the energy of the moon, blue topaz represents strength, courage and radiance, and diamonds are said to magnify the effect of the stones with which they are set.

Overall, the piece is a tribute to the life of Guru Gobind Singh Ji whose courage and radiance gave life to the Khalsa nation, and who passed the Guruship to the Siri Guru Granth Sahib – the Shabad Guru.

The piece is especially significant as it is a gift of the Sikhs of the West and was created with donations for the Kalgi from members of the global sangat of Sikh Dharma International. During the 300th celebration of Guru Gaddi, and for the first time in Sikh history, there are significant Sikh communities around the world made up of people of diverse nationalities. It is an offering to Takhat Hazur Sahib and to the Khalsa nation as a way of giving thanks for the beauty and wisdom of the Guru’s legacy. 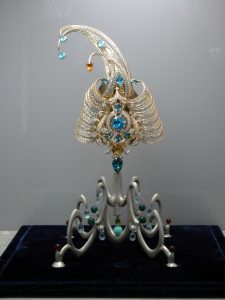 Front of Kalgi Pin on Stand 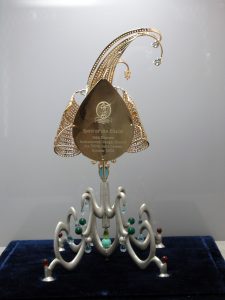 Back of Kalgi Pin on Stand

Close up of the Kalgi Pin 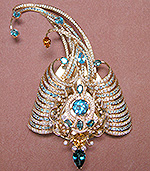 Close up of the Kalgi Pin