“In the Realm of Truth dwells the Formless Lord.”

It was my third visit to Darbar Sahib, and the longest. I went specifically because I know of no other place on the planet that can facilitate healing in all the 10 bodies, all the levels of our soul existence, at the same time. Think about that. Most healers and healing modalities address one, maybe two levels at the same time, and healing one level does not necessarily heal the others that need it.  My personal experience is that there is much more to us than the 10 bodies, and mine had been fractured for a long time. I needed Darbar Sahib.

I stayed at a hotel about 50 yards from one of the Darbar entrances adjacent to Akal Takht, on the Clock Tower side. I chose it because it still within the Darshan of Darbar Sahib and since I was there by myself, I needed to keep it simple and safe. So I was in that vibration for most of my entire stay–exactly what I required. 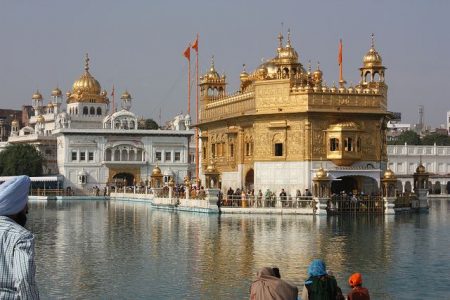 If you have never been to Darbar Sahib or India, there is a spiral circulation of people that is constant at Darbar Sahib, the Takhts (Sikh Thrones) and other large gurdwara complexes such as Goindwal or Tarn Taran. These Gurdwaras have perkarmas and sarovars—walkways encircling the water tanks. Some have only one entrance, but all the key points of the Darbar Sahib complex—the Golden Temple itself, the Akal Takht, and the outer perimeter—have four primary entrances along with several smaller ones. One joins this flow from whichever entrance one uses. The primary circulation around the perkarmas and in the Gurdwaras is clockwise, though there are always some folks going the other way. At Darbar Sahib, people circulate clockwise around the sarovar, up through three stories of the Temple and then out, and through the Akal Takht.

In some spiritual practices, a clockwise direction is used to concentrate energy into a cone. I am sure there are other reasons for the clockwise direction in various spiritual traditions, but I believe that the concentration of energy is one of them. The circulation of naad (sound current), of prayer, of devotion, and of light is a powerful experience at Darbar Sahib! Most people within the complex are reciting bani or reading from the Guru, praying, chanting, or singing kirtan along with the ragis. All these individual sound currents circulate as devotees move around the Harimandir. The individual’s naad becomes part of a single circulating naad that penetrates all levels of the person and the Darbar. The center of this vibratory spiral is the Golden Temple itself, and the top of the Harimandir is where the cone vibrates into the ethers. I understand from my own meditations that the topmost Darbar of the Golden Temple is Guru Ram Das’ special place, so this is my location of choice to sit and be in that naad (Guru Ram Das left his body before the Darbar was first completed). It is a space about 15 feet square, very cozy, and while many people circulate through, one can always find a place to sit inside near the Guru and still hear the kirtan over the loudspeakers. When I was there the Akhand Paath sevadars in this Darbar also read with a very powerful sound current (not all the readers read aloud). In that naad of Truth, I felt the darkness and poison start to circulate out of my bodies. When it was time to for me to re-circulate, I would circle the sarovar to the dipping areas for women. There I would dip from head to toe, feeling what had been uprooted from deep within in be washed away. Then back to my hotel to rest for a bit. 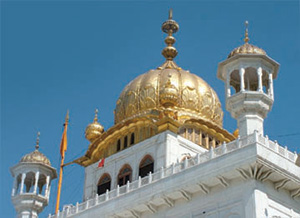 I spent my afternoons at the Akal Takht. The practical reason for this was that the causeway across the sarovar to the Harimandir was jammed with devotees by lunchtime. I was unprepared to stand in line for over an hour in the sun and am uncomfortable in large crowds (–which makes India visits very hard). I had no such wait for Akal Takht. There I meditated on what Siri Singh Sahib has said about the Akal Takht as the focal point for the nervous psyche of the planet, and how it sacrificed itself to protect that space/purpose during Operation Bluestar in 1984. I began to feel Guru wanted me in this place that had been destroyed and restored, as if to say “Dear Daughter, you too can be restored.” So daily I made my way to one of the upper level wings (both of which have ongoing Akhand Paaths), where I mostly had the space to myself. I would read bani and contemplate on this sacred space that belongs to all humanity, drawing strength from it. As Harimandir Sahib holds the space of our spiritual authority, Piri, Akal Takht holds the space of Miri, our earthly authority. One evening I attended Rehiras there and then watched as historic swords and other weapons used by Guru Hargobind, Guru Gobind Singh, Baba Deep Singh and other Sikh warriors were brought out from a gold palki, held up for display, and then put in sukhasan in silk or velvet sheaths and pouches.

My prayer for all our community is that everyone be blessed to visit Sach Khand of Sri Darbar Sahib at least once in this life.  Guru ang sang.