I went to a place drenched with the Guru’s love.  The people’s mission was to foster a space where the Guru touched the hearts of the youth who came.  Without a doubt they accomplished their mission.  This occurred at a ranch surrounded by snow at the Toronto Sikh Retreat.

The five workshops were Internal Revolution, External Revolution, Being an Inspired Activist, Gender Equality Revolution, and Art Expression.  The Internal Revolution touched on how Sikhi revolutionized the concept and experience of God, much like what I’ve learned from Yogiji’s lectures.  The presenter spoke of naam, naad, maya and their relationship to the gunas, and summarized it all by showing a SikhNet video by Guruka Singh.  I thought that was really cool because he tapped into Yogiji’s teachings. 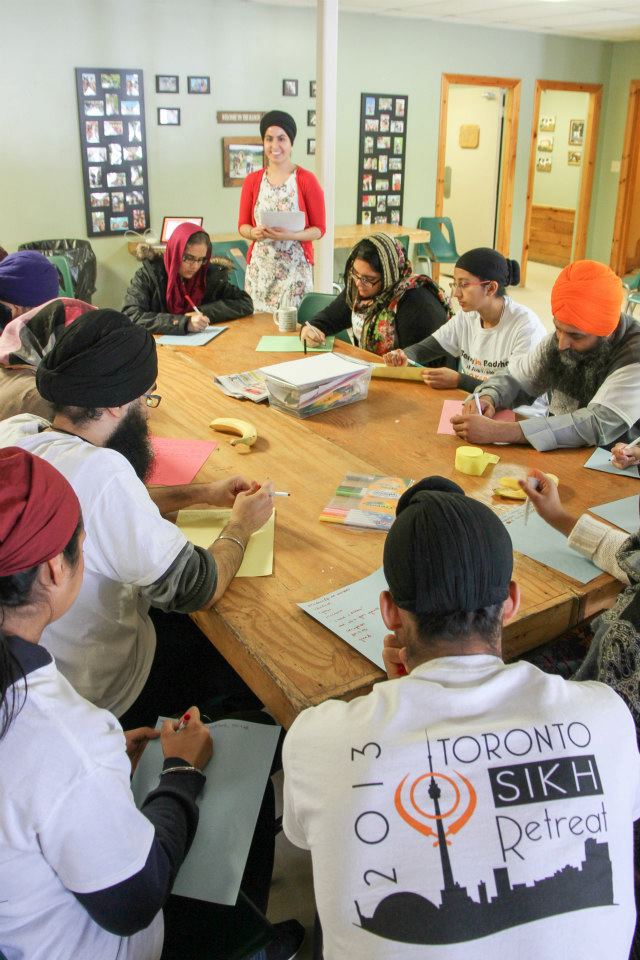 The External Revolution workshop showed how the Khalsa changed the world from after the passing of Guru Gobind Singhji until the present. The presenter gave us the history with such detail and insight.  He spoke of how during and after the Guru’s time, being a Sikh was illegal and thousands were killed.  He spoke of the times where Sikhs could only stay alive by hiding in the jungle, and yet were organized in jathas and misls.  A person was chosen to become a jethedar based on their merit such as playing the most inspiring kirtan or doing seva.  These Sikhs would also come out of the jungle to free the slaves being taken to other lands.  Then there was a time period where Sikhs focused on fighting for and keeping their land, during Maharaja Ranjit Singh’s rule.  He said a decline in morals occurred and people converted to Sikhism to gain money and power.  After Maharaja Ranjit Singh’s death, the Sikhs fought to keep their lands and his legacy.  This resulted in a major defeat in the first Anglo-Sikh War.  Although we learned much more, the theme became clear: When Sikhs stood up for others out of love, our efforts brought great victories to the people; when Sikhs fought on behalf of their own attachments, we lost brutally.  The question then became, what are we standing for today?

This led into the workshops about –isms: activism and feminism and how these are synonymous with Sikh Dharma.  As our aim is to see God in all or we can’t see God at all (they quoted Yogiji here), then naturally would flow an active effort to help others as our Gurus did.  This group had a plethora of ways they served, from uniting with the Native Americans in Canada on the First Nations issue that spoke to the heart of sovereignty to the Seva Food Bank that provides nutritious food to low-income families.  Their projects and actions spoke from their hearts and love for the Guru’s teachings.

For the workshop about feminism and Sikhi, we did an interesting activity that showed us the balance of the feminine and masculine in our Gurus and great sevadars.  We learned about the feminine in baani and watched that wonderful Sikhnet video by Shanti Kaur Khalsa called “Time for Women to Lead!”  We also had discussions about recent topics like Balpreet Kaur’s graceful response on reddit.com.

One of my favorite parts (along with sledding and archery) was the Gurdwara programs that happened every morning and evening.  The Saturday night program brought tears to many of our eyes.  A humble young man with a pink collared shirt sat behind the harmonium.  I don’t remember what he said, but the vibrations that came from his voice as he spoke and sang transformed the room.  I could feel the Guru’s presence so alive, and it reminded me of the Gudwara programs at summer solstice after morning sadhana.  After the hukum and prasad, the organizers gave people a chance to share their feelings and thoughts.  One person said that although he had grown up as a Sikh, he had never felt such love from the path and the sangat.  The Guru had indeed touched his heart.

I felt grateful to find many similarities between this retreat and solstices, such as the devotion and love and how people spoke in terms of energy and vibrations.  The organizers saw the light in others and created a supportive, safe space to bring that forth, by Guru’s grace.  To me, they personified the history and reality of Sikhi and were true “Aquarian beings.”