I would like to take this time to share a few words about my recent trip to Kenya, during which I had the privilege to serve and spend considerable time with the wonderful Punjabi Sikh community there. No words can adequately describe how deeply this experience has touched my soul, nor the gratitude I feel for having been granted this blessing; but I will do my best. 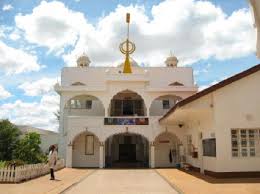 This journey was initiated by an invitation to participate in the 10th annual Sikh Youth Camp in Makindu Gurdwara in rural Kenya, about a three-hour drive from the capital city, Nairobi. The invitation itself was humbling; the organizers of the camp feeling that my presence and words would be of inspiration to the close to 200 young adults who were expected to attend. It came to my attention that many members of the Nairobi Sikh community were already familiar with the teachings of the Siri Singh Sahib, Sikhnet and the music of the likes of Snatam Kaur and the Chardi Kala Jatha. Although they knew of and admired the “Ghora Sikhs”, very few in the community had actually met one in person, so there was a real commitment this time around to get someone like myself to attend the camp. 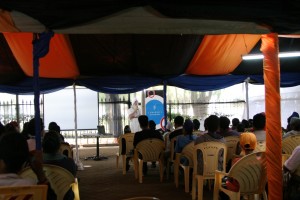 Makindu Gurdwara did not disappoint; as magical as advertised. Built in 1926, alongside the rail line that was laid down through the blood and sweat of a huge influx of workers from the Indian subcontinent; appropriately known as “The Lunatic Line”, so dangerous to work on, that if the heavy labor did not do you in, the lion’s appetite would! Situated between Nairobi and the coast and right beside the highway, the Gurdwara became a spiritual oasis for Sikhs and non-Sikhs alike, in transit or just wanting to get some relief from the hustle and bustle of city life. Just like at the Golden Temple in Amritsar, I heard countless stories of miracles and spontaneous healing having taken place at Makindu.

The camp was sort of a mini-Summer Solstice, offering opportunities for spiritual practice, diversion and socializing. At 4:00 am, everyone came to gurdwara to recite the Guru’s banis, and with such dedication and devotion. Then breakfast, followed by choice of morning activity, including gatka, kirtan and yoga. In the middle of the day, lectures given by those invited from abroad, including myself. Normally, it’s hard to keep the attention of young adults for very long in a lecture environment. Not so with these kids; so eager, so ready to hear from and be in the presence of anyone who could point them even one step closer to their destiny. 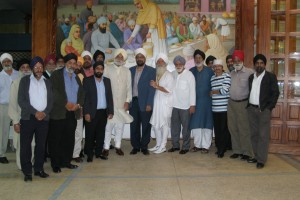 Most of the other speakers came from the Punjabi community in Great Britain, highly knowledgeable and passionate about Sikhi; annual participants in the camp, admired and beloved by all concerned. Their words and huge hearts re-ignited my own love for this divine path. It was easy to forget that I was there to give, not just to receive the blessings. I was requested to present on the very two themes closest to my heart and the ones I would have actually chosen myself: “How and Why I Became a Sikh” and “What It Means to Be Khalsa”. I have spoken on these themes in many different contexts and before all types of audiences, but I have to admit that no audience ignited the wellspring of my passion for these subjects like these innocent souls. Even more personally rewarding than presenting in lecture form was the opportunity to speak one-to-one to so many of these young adults on the challenges they had to confront on a daily basis: being bullied by classmates for wearing their articles of faith, not being supported by their own family in their desire to fully commit to the Dharma, integrating spiritual orientation into normal teenage life.

In addition to my participation in the Sikh Youth Camp, I would like to share two related experiences in Kenya worth making mention of. To begin with, I had the opportunity to teach two kundalini yoga classes a day for five days at one of the local gurdwaras. The classes drew about 40 very enthusiastic participants, both men and women, and from all generations. I even had the incredible honor of giving a special class for about a dozen gyanis! At least at this gurdwara, the sangat seemed to have grown beyond the ignorance and superstition surrounding the relationship between yoga and Sikhism. Although we know that this is not necessarily representative of the current atmosphere everywhere, this experience validated my impression that it’s only a matter of time, and that time is actually right upon us. 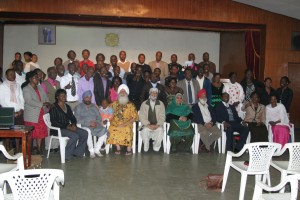 Lastly, I had the tremendous honor to speak in front of all the gurdwaras in Nairobi and to share with the large number of people in attendance what I saw as the most pressing issues that needed to be addressed by those communities: giving the youth shared ownership and participation in the gurdwara; treating women in the community with true respect and as equals; opening the gurdwara to and sharing the Guru’s teachings with the larger community; and the bestowal of respect and leadership based on spiritual commitment rather than material wealth. As I saw the majority of the congregation nodding their heads, smiling and eyes filled with tears of joy, I realized that we’ve already won the day. 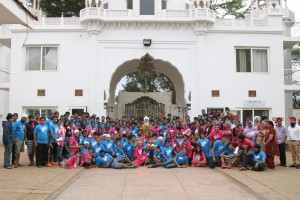 This whole trip had a huge impact on my heart, as well as my perspective on the future of our faith. I highly encourage anybody reading this to find a way to get out there and be the Dharmic bridge in any way that works for you, especially with these young adults who are so thirsty for what only you have to offer. You will be rewarded a thousand fold in return.

NOTE: As I am writing this short memoir, I learn that there is in progress a horrific terrorist attack at Westgate Mall in Nairobi, Kenya, where just a short month ago I was sharing life and laughs over cappuccino with a dear new friend in this land of enchantment. I send my thoughts and prayers to my new spiritual family over there, that those who were taken from us return home in peace and that those who remain behind to rebuild, do so with a pure and fearless heart.