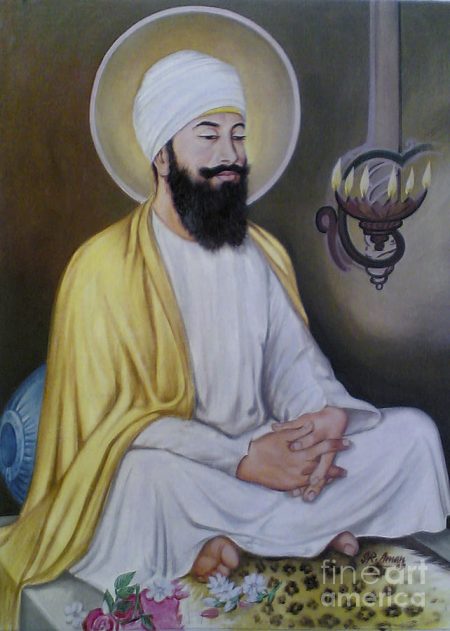 In this world there is neither up nor down, privileged or undeserving, good or bad.  There is just God.

Guru Teg Bahadur and his followers gave their lives in service of this truth; refusing to support the special claim to God that then Emperor Aurangzeb was imposing on that part of the world, with his demand for Muslim conversion.

Dedication to the truth of the Guru and understanding the impermanence of this incarnation is essential.  The story of Guru Teg Bahadur demonstrates this so well in his commitment to the highest honorable values.  His dedication to the Guru and early desire to be out of the world deepened his devotion.  Being brought back into the world, he served and then gave the ultimate sacrifice of his life and his devotees’ lives. For he was not invested in Maya.  His extraordinary sacrifice for the right “to live with honor and practice [one’s] faith according to [one’s] own rights” can only be seen as the highest expression of his soldierly nobility taking form.

His code was not militaristic. When asked by his followers to perform rituals or ceremonies during his travels, he refused, saying, “He who trusts in God and makes an honest living to share with others and injures no one, nor harbors ill-will against another need perform no other rituals.  His soul ever stays in health.”

Yet at his death he faced the mortal enemy with the courage and conviction of a soldier committed to do battle, refusing to debase his faith by turning tricks for the satisfaction of a temporary human form of power in Aurangzeb.  As the great Guru Teg Bahadur eloquently stated when brought before Emperor Aurangzeb, “Every ruler of the world must pass away, but not the Word of God or His Saint.”

Happiness is not to be found in searching for aspects of Maya – that leads to nothing.  Hold the love – devotional love – for the Guru in mind, and your direction will be clear:

Night and day, for the sake of Maya, the mortal wanders constantly. …

If you yearn for eternal peace, then seek the Sanctuary of the Lord. …

Why do you take such false pride in yourself? You must know that the world is just a dream. …

This is the way of the world, O Nanak; nothing is stable or permanent. …

The Naam remains; the Holy Saints remain; the Guru, the Lord of the Universe, remains

I would sum up my own moral code as, “train the mind to become one with God, foundationally and all other encounters will become engagements, but not enmeshments of the heart or ego.” This is a dying to the temporary life and a surrender to “the eternal and the ever dying” as spoken of by Kabir Ji.

This was an assignment from the Journey into the Heart of Sikh Dharma tele-course.

Journey into the Heart of Sikh Dharma is a small group class, meeting together via telephone biweekly with an expert presenter and the course facilitator.

This course will allow you to delve more deeply into a relationship with your spiritual path, and will also enrich your practice and understanding of Kundalini Yoga – it is a perfect complement or follow up to Kundalini Yoga Teacher Training.

The course involves an investment of time leading up to each session. Short reading, experiential, and written assignments are given. In addition, between classes, you are invited to explore your relationship with the material with another participant in your section. Your assignments are sent to the facilitator before each class. Highlights from each person’s reflections are shared during the class for learning and feedback.

Also, all students choose seva projects to do during the course as an offering to integrate the learning to the living experience.