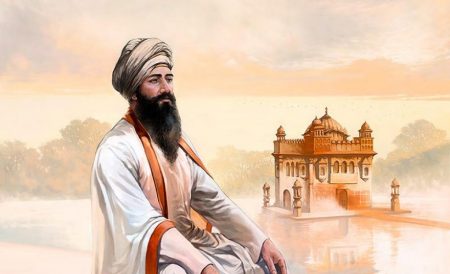 When Guru Teg Bahadur was born, he was named Tyal Mal (master of unattachment). He lived with his father Guru Hargobind and his mother Nanaki in the city of Amritsar, where he studied Sikh scriptures with Bhai Gurdas and learned how to use weapons.. . .His father, Guru Hargobind, had been the first Guru to take arms and fight back against the persecution and religious prejudice rampant in the country.

In keeping with the Sikh ethic of earning one’s living by honest labor, he was sent to live and work at Ramdas Farm with the revered Baba Buddha who, even though he was then quite old, still labored in the fields every day.

Naturally calm and introspective, when his beloved mentor died in late 1631, Tyal Mal became even more quiet and withdrawn. However, honoring the Sikh ideal of living a family life, he was married to Bibi Gujri in March of 1632. He was 11 years old. Two years later, when Painde Khan and the Moghuls attacked Kartarpur, he fought so bravely and fiercely alongside his father Guru Hargobind, that the Guru praised him for his expert swordsmanship and renamed him “Teg Bahadur” (brave wielder of the sword).

A Story about Guru Teg Bahadur in Banaras

The sacred river Ganges flows through the city of Banaras. To this day, pilgrims come from all over to bathe in its holy waters. Guru Teg Bahadur stopped Bhai Jwehri Maal who had been a follower of Guru Nanak’s teachings for a long time, as he was heading for the river.

The Guru explained to him that the place of pilgrimage for Sikhs is being in the company of holy people and not a river or any other physical location. He dramatically demonstrated that the Ganges flows to the Sikhs, Sikhs don’t need to go to the Ganges, by having Bhai Jwehri Maal pick up the rocks under their feet where, sure enough, clear water was flowing.

It is even said that in Banaras, a leper came into Guru Teg Bahadur’s presence, praying to be healed. The Guru instructed the musicians to sing a particular verse, and the leper’s pain disappeared.

Over and over he reminded people that it is by reciting the Name of God that the “five thieves—lust, anger, greed, pride, and attachment—can be overcome.” The Siri Singh Sahib referred to these five as sisters who are so fond of each other that if you let one in the door, the others follow!

Guru Teg Bahadur educated scholarly Pundits that it is not reading scriptures that is valuable, but rather living your daily life according to the wisdom they contain. 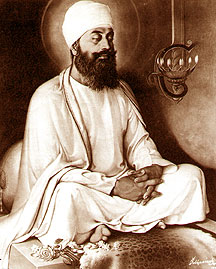 Read  Rajbir Kaur’s reflection on Guru Teg Bahadur – Train the Mind to Become One with God. 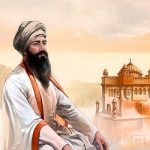 Read the story behind this painting of Guru Teg Bahadur at the Harimandir Sahib.