Since New Year’s 1979, the year of infinity that “will determine your fate in the ‘hand of God’,” the Siri Singh Sahib has aided our recognition of that destiny in a number of addresses that culminate in this issue with a declaration of the independent spiritual nation.

Guru Gobind Singh, at the time of Baisakhi, is known to have asked for heads. The test was to see whether people who claimed that they be­longed to the Guru came through or not. Five came and passed the test. To those who offered their head, Guru Gobind Singh did not first give the Amrit. He first gave them the bana (pronounced baanaa). It was the foundation stone laid for the beginning of the most beautiful consciousness, the Khalsa. Dress has a very unique power in it. It gives you confirma­tion in relation to the world around you. It gives you spirit and power to relate in your grace and your value to the values around you.

Sikh Dharma is not a ritual or a philosophy: Sikh Dharma is a living, practical experience of reality. There­fore, because of the values which you valued very much in the past, it is possible that you may be afraid to come out in society with basic values on which Sikh Dharma, the spirit of the Khalsa stands. Our tolerance of this is not our acceptance. Don’t misunderstand for a moment. We tolerate because we are compassion­ate. But that does not mean that we have accepted a person who calls himself a Sikh and does not wear the bana of the given father, Guru Gobind Singh, as his ultimate father on earth and in heaven, in order to walk on the path and thus make himself liberated.

In India, the Sikh religion has gone through many political upheavals and even today they survive as a minority. But on the whole, the main body of the Sikhs are very de­cent, religious and honest people. I would suggest you not follow the few corrupt who have worn the skin of Khalsa with the mind of a donkey. Your relationship has to be direct in spirit and in action. Guru Gobind Singh had mastery, therefore he cut through the mystery of time and space. He gave us the bana, then Amrit, later the Siri Guru Granth as bani (pronounced baanee). Now this fact and eventful situation is twisted by different people to serve different purposes, and it is sometimes very confusing. However, we belong to the land of free people and our caliber cannot accept slavery. Therefore we must not value social pressure. Social pressure is meant for those who are mentally bankrupt of their spirit and values. Sometime people feel that if you wear a three-piece suit that you will look socially impressive. I ask you, what social impression do you want to create when you are mentally a coward and spiritually bankrupt?

This world is a temporary place and it must be played that way. You have the right to enjoy this earth and its values, but don’t forget it’s a tem­porary place. A woman who cannot maintain her grace and values of grace is worse than an animal. She is a pawn of the game, who can be played at the will of those who are her exploiters.

You must live with your values. If your children see in you duality with your concept of life, it is enough rea­son for them to hate you. Your gen­eration could not live with bank­ruptcy of spirituality and truth. You could not live with demagogy and clever moves. Learn from your own lesson. Live inside and outside alike so that your own born may find the unison of your caliber as a human being and give you respect. 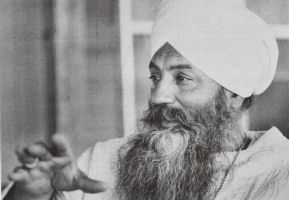 The greatest philosophy on which this Dharma lives is fearlessness. Normally we can proudly say that the majority of the body of the Sikhs are still fearless. It is only a few poli­ticians and a few professionals who for the sake of their in security have sold their souls, have lost their man­ners as pure beings, and have come out to sell their consciousness. You who have made it to the point of belonging to the House of the Guru have to walk on the path very cauti­ously so that you may not end up with the same blunder.

Beyond national boundaries is the concept of the Khalsa. There is tre­mendous human misery, and if we have decided to take shelter in the house of Guru, and cross lines with the life of dust, then we must under­stand Harimander is our point of worship and not Las Vegas, the mecca of American sensuality and corruption. We have no political aI­legiance because we have no seat to win. Our mission is simply to serve humanity and to conquer every heart of every human being so that everybody on this earth can live healthy, happy and holy. As our ex­tended goal does not recognize boundaries, so we do not recognize boundaries. Therefore, you must re­member, when you fault in baanaa you de-value the sacrifice of the five beloved ones.

You have to look distinct. Guru Gobind Singh has said it clearly. When there will be living in you a very distinct, disciplined life, Guru Gobind Singh promises that he will inject in you the entire cosmic power of radiance and spirit. So it is in your hands how grateful you can be to live a wonderful human life. There is no use in living half-minded. Value not social pressures, my friends, they have always been exerted on all men of God. 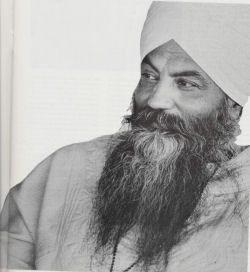 Therefore, on this day, I’d like to let you know that we will serve everybody for all times to come, but in the house of Guru Gobind Singh, those alone shall be accepted who walk on the tenets of the Rehit Maryada given by the great Master. If you want to live as a liberated human being, which is called in the scriptures Jeevan Mukht, follow the path very carefully, and gracefully, distinct enough that you can all the time feel that you belong to someone who is someone to God. I hope the few words which I have shared with you from the depths of my heart shall be of value to you in the course which you have adopted to live.