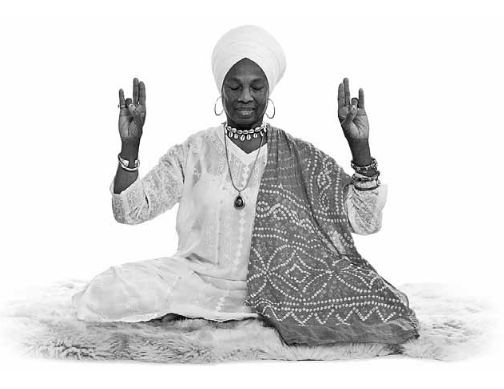 POSTURE: Sit in Easy Pose with a straight spine.

MUDRA: Bend the elbows down by the sides. Bring the hands into Ravi Mudra, Sun (ring) finger held down with the thumb, the palms face forward and the fingers point straight up. Keep the other fingers straight.

Important: The wrists are at the level of the shoulders, with the hands in line with the ears. Make sure the spine is kept very straight, and Neck Lock engaged.

MANTRA: Chant along with the Kundalini Bhakti Mantra (Adi Shakti, Namo, Namo.) The recording by Gurudass Kaur is played. (See below for musical options)

TO END: Inhale, keep the posture steady, and move immediately into Part Two.

MUDRA & MANTRA: Keep the same mudra, don’t move at all—begin chanting HAR aloud, pulling in on the Navel Point with each recitation. The recording Tantric Har is used.

This devotional mantra (a Bhakti mantra), invokes the primary Creative Power which is manifest as the feminine. It calls upon the Mother Power. It will help you to be free of the insecurities which block freedom of action. By meditating on it one can obtain a deeper understanding of the constant interplay between the manifest and the unmanifest qualities of the cosmos and consciousness.

I bow to the Primal Power.

I bow to the all Encompassing Power and Energy.

I bow to that through which God creates.

I bow to the creative power of the kundalini, the Divine Mother Power.

A WOMAN’S PERSONAL MANTRA AS AN ESSENTIAL DAILY PRACTICE

This powerful mantra belongs to all women to call upon any time. She can chant it freely and powerfully at will, any time.