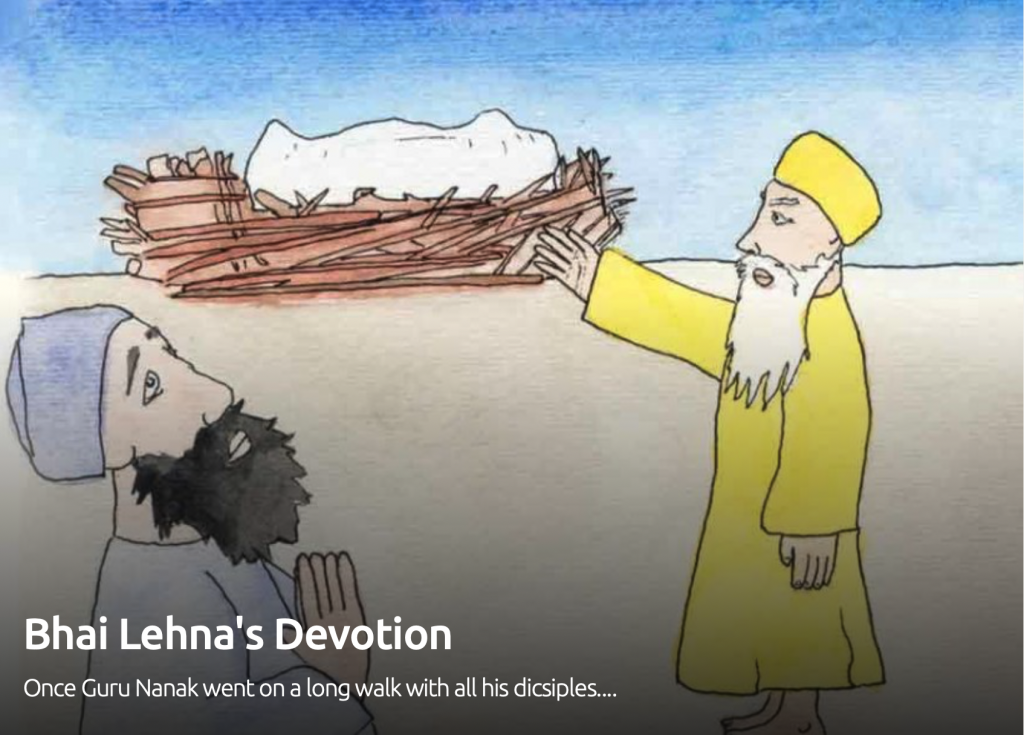 A famous yogi came to visit Sri Guru Nanak Dev Ji in Kartarpur. He was impressed with such a lovely community, and he said to the Guru “Wow, this is heavenly!  What a beautiful community!” Guru Nanak said “You will see just how beautiful.” The next day Guru Ji announced to the whole village, “We will all go on a walk together!” Everyone got ready for the walk, but something strange began to happen in the air. Dark clouds began to fill the sky and the wind started blowing very harshly.

When Guru Nanak came out of his house, he had a very wild look in his eyes. He had some ferocious dogs with him that were barking madly. He was wearing heavy clothes and had a sharp knife in his hand. Without saying anything Guru Nanak Ji started walking with great speed. The people thought, “What is going on? Guru Ji is not acting normal.” Some of them got spooked and didn’t want to follow him on this strange walk. Something didn’t seem quite right to them.

But many people felt that Guru ji had given them an order to follow him for the walk. So they listened to the master and tried to catch up to his fast pace. The walk was longer than normal. They didn’t take the usual paths so it was difficult to go along. But wait! What was this!? They started to notice there were copper coins laying on the ground! Guru ji must have put them there. They thought, “He must be rewarding us for our obedience in following on this strange journey.” So they took their share of copper coins and went back to the safety of their homes.

Those who were left kept going for quite a while longer. This was starting to become a much, much longer walk than they had expected. The Guru was walking on, and on, and they kept up. But it was starting to be too much. Just then they saw something completely unexpected. There were silver coins laying on the ground! They thought, “Guru Nanak is great! We’re very lucky that we waited longer and went through the extra effort. Now we have silver coins! They picked up the coins and left.

Not many people were left at this point. Those who stayed surely had a lot of devotion to keep walking this far and not stop to pick up the copper and silver coins. Then guess what happened next? Gold coins appeared on the ground! The people who picked up loads of gold coins were very happy. “It was well worth it to follow the Guru today,” they thought.

Guru Ji kept madly walking on and by this time the only ones left were two Sikhs, Bhai Lehna, the Yogi and the Guru. They kept on walking. They came to a corpse lying in the road. It was covered with a sheet and it smelled really bad. “Okay!” said the Guru. “Stop here. I want you to eat this corpse.” The two Sikhs didn’t know what to do with such a weird command, they simply turned and ran away.

Bhai Lehna Ji only knew to obey his Guru, out of love, he said “Where shall I start? At the head or the toes?” Guru Nanak yelled, “Start in the middle!!” Bhai Lehna devotedly went to the corpse to do as he was told, and when he lifted the sheet off the body something had changed. The awful smell of the dead body had turned sweet. Under the sheet all he saw was Prashad!

He took a handful of the Prashad and he offered it to the Guru. Now Guru Nanak looked at the Yogi and said “See, I have many followers but only one true student.” The Yogi said “This man is like your ‘ang’, a limb of your own body, he is a part of you.” Guru Nanak named Lehna ‘Angad.’

The Sikh who was so devoted he was the same as the Guru. Angad’s humility and devotion completely ate up his ego. That is why he became worthy of sitting on the throne of Guruship and carrying on the light of Guru Nanak. Through his devotion Lehna became Guru Angad Dev Ji.