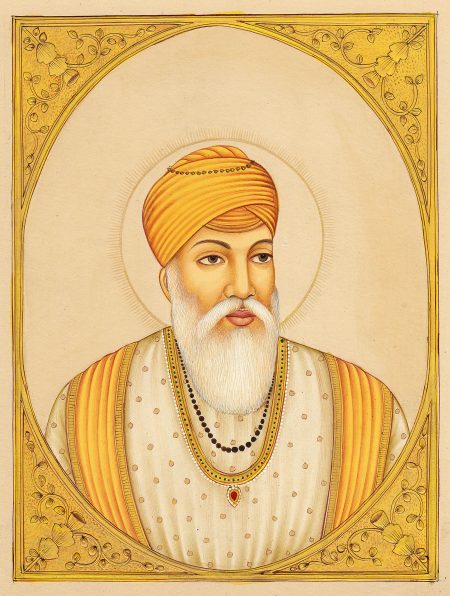 Amar Das was a Hindu of the Vaishnav faith. He was a sincere seeker of spiritual truth. Every year for twelve years, he bathed in the sacred Ganges River. He also fasted regularly. Despite his earnest religious efforts, he still felt empty inside. During his last pilgrimage to the Ganges, he befriended a monk, and they traveled home together. After several days, the monk asked him, “Who is your guru?”

Amar Das had to admit he didn’t have one. The Monk was horrified. He said that he had committed a sin by traveling with a man who had no guru, and therefore he would have to return immediately to the Ganges to purify himself! This astonished Amar Das, and set him to thinking that not having a guru, a teacher or personal spiritual guide, might be the cause of his dissatisfaction.

Amar Das lived near his nephew, who was married to Guru Angad’s daughter, Bibi Amro. One early morning a few days after his fruitless pilgrimage to the Ganges, Amar Das heard her reciting Guru Nanak’s epic poem, Japji Sahib. He was absolutely entranced. He thought it was the most beautiful thing he had ever heard.

For several mornings, Amar Das secretly listened to Bibi Amro reciting Japji Sahib and singing sloks (stanzas) from Asa di Var. The divine words touched his soul deeply. In appreciation and reverence, he bowed to her and humbly asked who had written them. Bibi Amro told him all about Guru Nanak, and explained that her father, Guru Angad, was his successor. Amar Das was so excited, he could hardly wait to meet the great soul who had been chosen to carry the divine light of Guru Nanak. Perhaps this might be the guru he was seeking!

The year was 1540 and Amar Das was 61 years old. When he came into Guru Angad’s presence, Amar Das felt such divine bliss filling the emptiness within his soul, that he immediately prostrated himself at the Guru’s feet. From that moment on, he devoted his life to serving the Guru.

Every six months, Guru Angad gave saropas (scarves of honor) to his devotees for outstanding service. Amar Das had been given six such scarves. He put each one on top of the previous ones, wearing them as turbans on his head. He didn’t want to remove any of them, since he felt it would be disrespectful to discard such a gift from his master.

Eventually this situation was brought to Guru Angad’s attention. He had Amar Das brought to him, and had the turbans removed, revealing sores and scabs—since his head and hair had not been washed in three years! He bathed Amar Das’ head, healed him, and blessed him for his deep devotion.

Amar Das’ service, loyalty, and devotion were so outstanding that he was the obvious choice when it came time for Guru Angad to name a successor. As had become the tradition, Bhai Buddha was called and told of the decision, and Amar Das was installed as the Third Guru Nanak at the age of 73.