Kashi House, “a not-for-profit publisher of fine quality books and art print on the cultural heritage of the Sikhs and Punjab,” have released a new edition of their 1999 release on Sikh martial history: Warrior Saints: Four Centuries of Sikh Military History Vol. 1. The authors, Amandeep Singh Madra and Parmjit Singh wrote the first edition in 1999 to commemorate the tercentenary celebration of the 1699 birth of the Khalsa at Anandpur Sahib. Since then, they’ve gone on to found the United Kingdom Punjab Heritage Association as well as write and lecture extensively on Punjab history, art, and heritage. Their new edition of Warrior Saints accomplishes what many books on Sikh history do not: it shows that history, culture, and religion are not monolithic and unchanging but the result of circumstance and changing realities. By showing us the changing political and cultural realities of erstwhile Punjab, the authors give us a taste of how the Sikhs of today come from the Sikhs of yesterday specifically through the lens of the Sikhs’ rich martial culture.

The introduction gives us an understanding of what is to come. Using eyewitness accounts, oral tradition, and solid research, we are given an entertaining, to the point account of the plight of the Sikhs ranging from the 15th to the 19th centuries. The introduction also tactfully describes the Sikh ethos: their beloved practice and philosophy that gave purpose to their martial tradition. The first words in the book are a quote from the honored Sikh poet Bhai Gurdas: “To protect an orchard hedge it with thorny trees”. It is fascinating to uncover the transformation of Sikhs from peaceful devotees to fearsome warriors.

Out of context, this massive transformation can be jarring. It is hard to connect the peaceful writings of the Guru Granth Sahib to the poetry and practices of the later Sikhs. How does one make sense of the practice of jhatka, decapitation of a goat in a single blow for the sake of food, to practice the act of killing, and as sacrifice to the sword, with the pluralism and peace of the Sikh core beliefs? How do we make sense of this verse of Guru Gobind Singh, praising battle?

…Warriors on both sides thundered challenges. With strong arms they struck. Female ghouls, drinking blood and eating flesh to their fill, belched and shrieked. To what extent shall I recount the great battle that raged? Those warriors that engaged were martyred, while thousands fled the field.

Warrior Saints illustrates an existing Indian cosmology and warrior ethos that the Sikhs elaborated on and used to embolden, over time, into a formidable fighting force. Everything from the poetry they read to the clothing they wore, inspired the Sikhs toward battle readiness. Even women, in the form of the Akalin warriors, were covered in weapons. 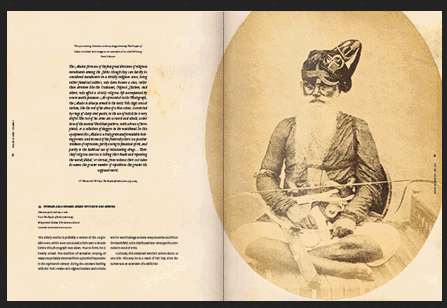 As the book and history progress, we see the Sikhs change from being a oppressed minority fighting for an ideal and for freedom to becoming rulers in their own right. By all accounts comparatively enlightened rulers, the Sikhs became embroiled in infighting and, as time went on, internecine warfare. Warrior Saints captures that short period through vignettes that display art, photos, contemporary accounts, and poetry exemplary of the aesthetic of the Sikh imperial period. The book ends with the effective fall of the Sikh empire vis-a-vis the British annexation of the Punjab after the two Anglo-Sikh wars.

Warrior Saints is visually stunning and expertly laid out. As for the writing, it is deeply informative while eminently readable. Moments made my hair stand on end like the account of the Sikh army laying down its swords at Rawalpindi after its defeat at the hands of the British.

Many an old Sikh did I see with his long, white beard, betokening in his soldierly bearing and carriage the pride won in the days of Runjeet, lay his sword on the heap with as much tenderness as a mother would lay her child in its cradle, and then stepping back with tearful eyes bow his head in reverence, and pay it a last farewell. It was a sight which those who saw will never forget.

With all of the bloodshed and gruesome reality of the Anglo-Sikh wars, I wondered what it was all for. I wanted the book to spell it out for me and answer my questions. Was it a moral fight? Was it resistance for the sake of resistance? How do we reconcile reality with the common Sikh view of the warriors of yore as paragons of morality? 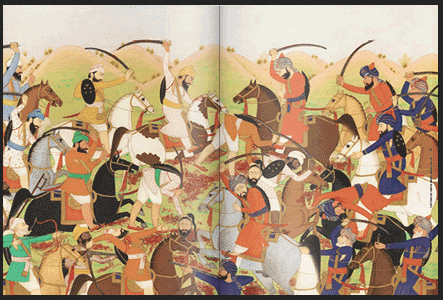 Of course, as good art does, nothing is spelled out or overtly explained. This book has no opinion, really. Its only agenda is to tell a story that is honest, not steeped in dogma or bias.

I wanted to believe that the Sikhs were special. That when Sikhs attained kingdom, they would behave differently. Maharaja Ranjit Singh did not use the death penalty and held a religiously pluralistic court, but in the end, the Sikhs fell in much the same way that other empires did. Infighting, excess, and pride were their downfall. I became aware of my own bias.

What, then, does one take away from this book that is as much an experience as it is literature? Ultimately, I walked away with inspiration. The accounts of these people are seemingly super-human. Warriors like none other; the Sikhs fused their one-pointed devotion with martial prowess. Their focus was exact and wholehearted. Their principles were lofty.

The authors state that the book is written for a “worldwide audience: Sikhs and non-Sikhs alike”. If you know nothing of the Sikhs, you will know a lot after reading Warrior Saints. If you know a lot about the Sikhs, you might be surprised by some of what you find. Either way, you’ll see their history with new eyes, and you might just learn something about yourself in the process.