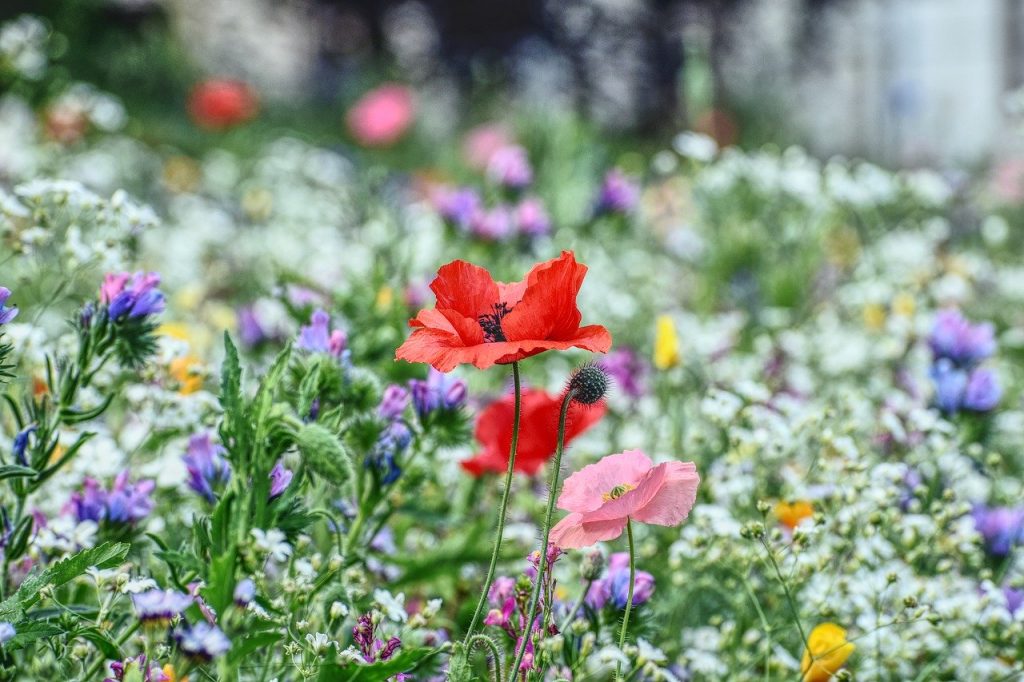 Image by Susanne Edele from Pixabay.

This post was originally published on SikhNet. It was written by Dr. Devinder Pal Singh.

Nature is marvelous, beautiful and colorful. With its fiery golden sun, blue sky, white-grey clouds, lush-green forests, and snow-covered fields, it is an intrinsic part of our lives. The grandeur of silvery moonlight and the sparkling beauty of a star-studded night sky can leave us wonderstruck. Nature can set a sky aflame at sunset or magically transform a familiar landscape into a snow-white wonderland (1).

Gazing at the snow-covered mountains or the splendor of the greenish-blue seas, we see the earth renews its beauty at each season of the year. Nature has its scheme of colors for its cyclic seasons. Flowers of different colors: pink, yellow, blue, violet, set against green and olive, are not only beautiful to look at, but bring us happiness and uplift our mood.

Color is an attribute of things that results from the light they reflect, transmit, or emit. This light causes a visual sensation that depends on its wavelengths. Nature with its diversity of forms and colors is a treat to visit. There are about 8.7±1.3 million eukaryotic species (2, 3) on our planet, which are widely different in their colors and forms. There are about 250,000 to 400,000 species (4) of flowering plants with the multiplicity of colors.

Guru Arjan Dev proclaims such an existence of numerous forms, colors, and realms in Nature as:

“(All things and beings) appear in numerous colors.”

Researchers report that the primal cause of the origin of things and beings, and the multiplicity of their colors and forms, are the result of the various natural forces, environmental factors, and their interactions. Sri Guru Granth Sahib (SGGS) describes that it has occurred in multiple ways, under the natural laws, as ordained by the Creator (God).

Guru Nanak proclaims it as:

“He created the world, with its various colors, species of beings, and the variety of worldly phenomena.”

Guru Ram Das elaborates that all the living beings, with their diverse colors and forms, have originated by multiple methods e.g. from an egg, from the womb, from self-division, and earth:

“Life is born from the egg, from the womb, from self-division, and the earth; God created the beings and creatures of all colors and forms.”

The world of nature is colorful and bright (5). Right from the sky above to the sea below, nature abounds in the richness of color. The sky can be clear and blue, it can be dark with clouds, it reflects the glory of the rising sun and the variegated hues of the setting sun. The normally blue sea can be green, grey and many more subtle shades.

Seasonal changes also bring in changes in the landscape. While spring is rich with color, autumn provides a restful view with its soft browns and ripe greens, and winter brings in the whiteness of snow.

There is an amazing diversity of colors and patterns exhibited by about 9,000 bird species found in the world. The bright colors of a peacock are a pleasure to the human eye. The animal world has its own variety of colors. Even the skin color of human beings has a variety of colors such as white, black and brown. Thus He colors and their shades in Nature are innumerable.

Guru Arjan Dev described the diversity of colors and their hues as limitless:

“He fashioned it in various ways, with limitless colors and forms.”

‘Natural Law’ is a philosophy of law, that is supposedly determined by Nature, and so is universal (6, 7). SGGS enunciates that the laws of Nature, set by the Creator, at its origination, cause the worldly show to go on.

Guru Arjan Dev proclaimed that the multiplicity of colors and forms took birth as per the command of the Creator (Hukam / Natural L aw):

“By His Order, there are so many colors and forms.”

Guru Ram Das expresses that the Creator’s essence is in all beings and things, and all of them follow the natural laws set by Him:

“His One Form has one, and many colors; He leads all according to His command.”

Gurbani proclaims that everything is part of an all-encompassing, immanent God. All forms of reality may then be considered either a mode of that Being, or identical with it. It asserts that Nature is identical with divinity.

In Sikhism, the term divinity is used to refer to the singular God (Akal Purukh), central to the faith. Guru Nanak proclaims that God is all-pervading in the multiplicity of colors and forms in Nature:

“He is contained in all forms, colors, and minds.”

Colors are one of the most beautiful aspects of the physical realm. Each of these colors has different meanings in various spiritual philosophies (8). In Islam, green is the most prominent color and is symbolic of springtime renewal, joy, success, and happiness. In China, yellow has always been associated with the imperial household and red is the most auspicious color. In Catholicism, blue is the color most closely associated with Mother Mary and the heavenly realm.

In Sikhism, the term ‘color’ has been used to describe several different meanings, in various spiritual contexts.

Guru Nanak Dev proclaims in his hymns of Sidh Goshat that it is His fundamental principle (basis) to see the essence of the Creator in all beings and things, despite their numerous colors and forms. Thereby He articulates that God is all-pervading and we should not discriminate people based on their color or creed:

“My fundamental principle is to see the Lord’s Light in all, although their forms and colors are so numerous.”

Guru Amar Das, using the analogy of coloring a fabric permanently, by using a dye, urges us to use the love of God as a dye, to color our mind permanently. He proclaims that such a person, who has imbibed the love of God in himself/herself, can never be enchanted by maya (worldly passions):

“My Friend is so full of joy and love; He colors my mind with the color of His Love, like the fabric which is treated to retain the color of the dye. O Nanak, this color does not depart, and no other color can be imparted to this fabric (mind).”

Color symbolism is also prevalent in almost all religions. In Christianity (8), white refers to righteousness, forgiven sins, the garments of angels, and the throne of judgment, purity and joy. In contrast, black in the Bible refers to sin, disease, death, famine and the night. Red commemorates martyred saints. Red refers to the blood of life, sacrifice, sin or war. Purple in the Bible refers to royalty and kingship. Blue is symbolic of heaven, the will of God, and truth. Yellow is being used to represent divinity, holiness, God’s glory, and/or God’s fire or judgment. Green represents the triumph of life over death. Green in the Bible is usually a reference to growth, vegetation or fertility.

Colors play a very important role in religion and culture for the Hindus as well. They represent (9) a very deep significance. Hindu artists use color on the deities and their dresses signifying their qualities. Some of the main colors used in religious ceremonies are saffron (kesar), red, yellow (turmeric), green and white, etc. Proper use of colors creates an environment, which keeps a person cheerful.

“Saffron, flowers, musk oil and gold embellish the bodies of all.”