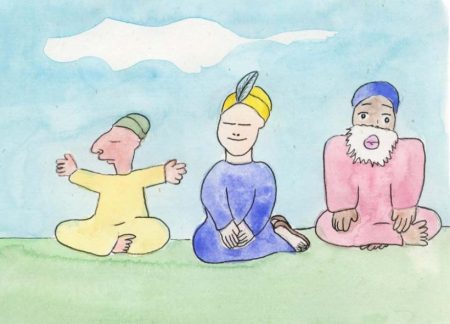 Guru Har Rai Sahib chose his youngest son HarKrishan to be the eighth Guru. Guru HarKrishan showed the Sikhs and all people that he truly was. He spoke the appropriate words of Guru Nanak for the right
situation. He showed divine knowledge and healed people. Elsewhere there was a Brahman, which is a Hindu Priest, who used to teach people the Gita. The Gita is an ancient holy book that contains many great truths. It speaks of a great saint named Krishna, who was very close to God. The Gita is written in a very, very old language. People dedicate their whole lives to learning this language and understanding the Gita.

The Guru replied, “Brahmans speak of God but don’t feel it.” The Guru read his thoughts and said,”You think I am too young to understand divine knowledge. Yet if a Sikh of mine can explain the Gita to you, than the Guru does too. Go outside and find any Sikh. They will explain the Gita for us.”

The Brahman thought he was very clever. He decided to find a person who couldn’t even read or write. The Brahman found a Sikh boy who looked like he belonged to a lower caste. The boy didn’t have a normal mind and his body was didn’t function like most people. “What is your name?” Asked the Brahman. The boy stuttered, “Ch…. Chhhh…….. Chaju.” The Brahman thought “He can hardly say his name, lets see him give deep explanations of the Gita, haha.” So they went to see the Guru.

The Brahman chose the most difficult parts of the Gita for Chaju to explain. The Guru said, “Chaju, you are now a very wise scholar. I want you to explain the Gita.” And the Guru took his staff and touched Chaju’s head with it. Chaju began to explain the mysterious passage, in a clear and understandable way. Chaju explained, “When One knows who they truly are, they are God. That One is beyond being created at the beginning of time.That One will stay alive and well, even when the universe is destroyed.”

The Brahman was surprised that Chaju explained the line perfectly. He picked out another very difficult line. After reading it he said, “Explain this!” Chaju explained, “One who’s soul has many desires, becomes passionate. Because of this, they are bound to be born in human life to fulfill these desires.” The Brahman couldn’t believe what he was hearing. He just heard explanations of the Gita that he hadn’t thought before. It put everything in to perspective. He said to the Guru,”Forgive me, I thought you were just a little boy who couldn’t know anything. I am just a proud man with useless knowledge. You are one with God and know everything. God speaks through you. I am like a child before you.”

The Guru blessed him to be a Sikh and he began to have an experience of the things he only used to read about. He began to live righteously and be serviceful. We thank God for giving us the lesson of Guru HarKrishan’s life. Now we can not ignore the truth that God is in everything. If a child is one with God, that child is beyond time. Our souls are part of the One Soul which is immortal, so what does it matter of a person is old or young?

This version of the story is courtesy of Sikhnet.  Read this story and listen to it on their website.