Guru Ram Das was the Fourth Sikh Guru, and a man of infinite compassion and service, whose very presence could heal.  In addition, he was the King of Raj Yoga, having been given that throne for perpetuity.

What is Raaj Yoga?

How did the Throne of Raaj Yoga Come to Guru Ram Das?

..That manifestation of Guru Ram Das as a Raaj Yogi in personality, in practice, and in reality, in the very essence of his being, was sermonized in the Siri Guru Granth Sahib. There is an exact science, there is an exact technology, there is an exact knowledge in which an individual finite little man who is nothing–he doesn’t even know whether or not he’ll get up in the morning or whether the praanaas of life will come to him–that individual can manifest Almighty God in the essence he wants, or in the essence she wants. This is the great knowledge which is in existence.  You cannot eliminate wars; you cannot eliminate the destruction of humanity. The only way we can grow is by practicing the Shabad, by mastery of the Shabad.”  – Siri Singh Sahib, August 13, 1978

This shabad gives you the majesty of the self and the grace of the surroundings. It unites body, mind and soul. It gives one the power of mastery over wealth.  A Raj Yogi lives like a king outside and a total Yogi inside. 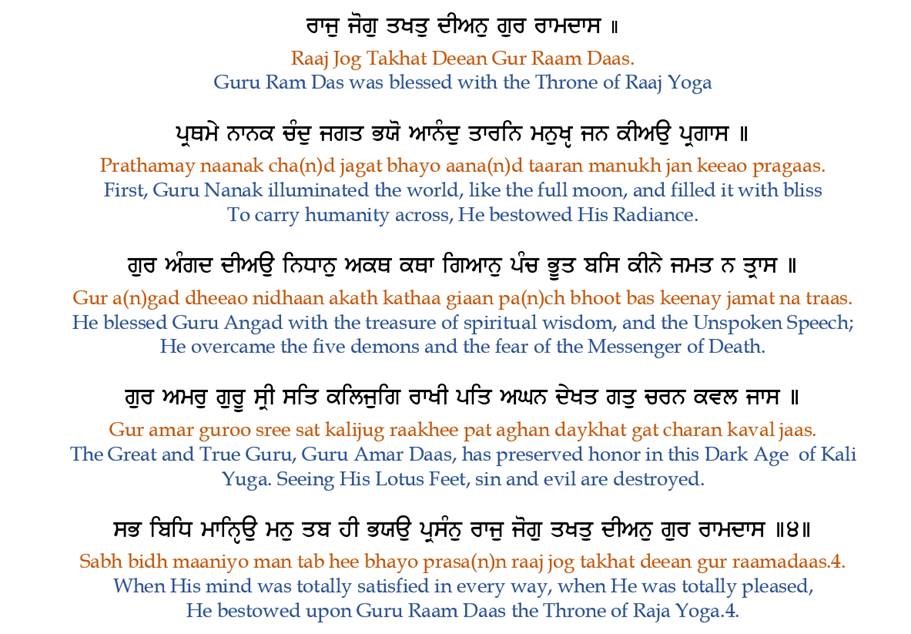 Listen to this shabad by Pritpal Singh