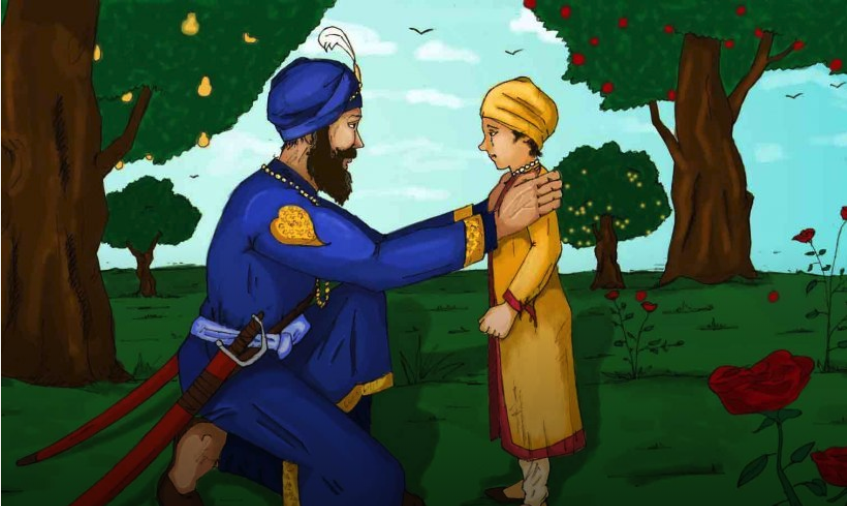 This story is courtesy of Sikhnet:

Har Rai Ji was a gentle soul. Though he kept the outside look of a warrior, it’s his inside spirit that makes him a True Warrior. Many can have victory physically, but few achieve spiritual victory.

One time, as a child, the tender Har Rai was coming back from horse riding. He saw his divine grandpa, Guru Hargobind. Har Rai’s eyes lit up, “Grandfather!” He got off his horse and skipped over to the Guru who was meditating in the flower garden.  Har Rai Ji always loved to be in his Grandfather’s spiritual presence.

Har Rai was wearing a regal robe, a chola, like a warrior-prince. He got lost in his excitement and accidentally caught the thorn of a rose-bush with the cuff of his chola. He didn’t notice right away, but the cloth pulled on the thorn, ripped the chola a little and jostled the flowers. The petals of the rose broke off and fell to the ground. When Har Rai Ji saw what he had done, that his carelessness had caused harm to another living being, he cried, “Oh no! I’ve hurt the flowers!!” He began to cry.

A Sikh who had been watching all this told Guru Hargobind Ji who came over to provide comfort. The Guru’s warm voice always seemed to make things right:

“The Creator has made this whole creation. To serve God we should take care of the creation.”

The Guru’s words brought clarity to his mind, “Think of this as a warrior’s lesson. A warrior must first master themselves as they walk their path through the world.” The Guru gently added, “Keep wearing the chola, just lift it out of the way when needed. It is good for God’s servants to be gentle with all beings.”

Sweet Har Rai found these teachings reached deep into his heart. Though he was always prepared for defensive battle, he held a deep gentleness sacredly in his heart. His life was dedicated to being kind to all beings. He would sometimes say, “A mandir or a mosque can be rebuilt and repaired, but not a broken heart.”

Later, it became clear that Har Rai would become the next Guru. The Guruship was passed on to him when he was only 14 years old. Even though he was a young man, he was very mature spiritually. He conquered his own mind and was a living channel for Guru Nanak. His presence was full of light.

Great, great is Guru Har Rai Ji, may we see you with our mind’s eye, may we feel you in our heart’s heart.

Guru Har Rai Ji always said, “Everyone’s heart is a jewel, it’s not good to break it. If you long to see the Beloved Lord, never hurt anyone’s feelings.”