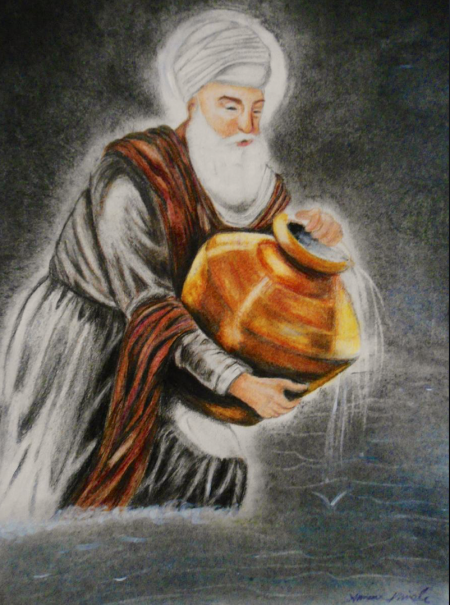 Guru Amar Das became the Third Sikh Guru in 1552, following the footsteps of Guru Angad. He taught us that equality is the foundation to a fulfilled life. By treating all living beings with love, respect, grace and dignity, we learn to see God in All.

1. Free Kitchen for all – He created the Guru Ka Langar, to serve and feed people in need and also as a way to make a powerful statement: “We are all equal in nature”, since all visitors from any caste, creed, ranking, social status who wanted to meet him, were asked to first partake in Guru Ka Langar. When emperor Akbar visited the Guru, he too first sat as a commoner in the Langar, and then had a meeting with the Guru.

During these times of challenge, were able to witness that a warm meal brings hope and dignity to all, specially when we remember Guru’s saying “Guru’s kitchen never goes dry, nor empty.”

2. Women’s Rights Advocacy – He fought against the practice of Sati (the burning of the wife on her husband’s funeral pyre), the Parda (veil to cover the face) and female infanticide. He also encouraged widow-remarriage. He even appointed 52 women missionaries to spread the message of Sikhism.

There is still so much to do in terms of women rights.  Following Guru Amar Das’s legacy as inspiration and guide can help us keep up!

3. Importance of Humility as the gateway to God – Guru Amar Das always brought this high quality himself to all of his actions and words. After he was proclaimed the new Guru, Datu (one of the sons of Guru Angad) literally kicked him out of the throne yelling at him that he was just merely a servant and not a real Guru, to what Guru Amar Das (still lying on the floor) replied: “I am old and my bones have grown very hard, I fear they have hurt your tender foot.” He went back to his village afterwards.  However, Guru Angad’s followers (including Baba Buddha) went to find Guru Amar Das and begged Him to come back and guide them as a Guru. After listening to their humble requests, He came back with them.

4. It’s never too late to live a spiritual life – Every morning, He used to carry water from the river for Guru Angad’s bath. He couldn’t bear giving his back to the Guru, so he would walk backwards on His way to the river and back…and he was already in his 70s! He became the Third Sikh Guru at age of 73.

5. Life can be a blissful journey – He left us the precious “song of bliss”, Anand Sahib.  One of the Sikh Banis, it is a profound composition full of words of ecstasy and divine love to awaken the heart and uplift the soul.