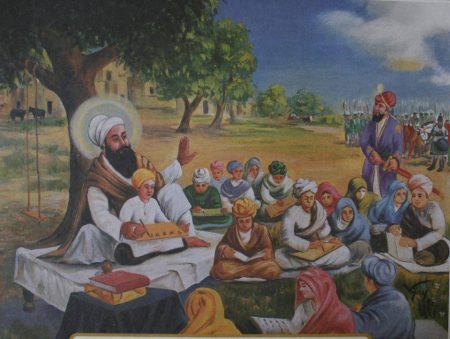 This image is courtesy of Daily Sikh Updates.

This story is provided courtesy of SikhNet

And so he decided to drive away Humayun and to take his throne. They fought a number of battles. Humayun was defeated, and he had to run for his life.  “I must escape..I will get caught.”

After some time, he reached the city of Lahore. He decided to see some Holy men, or Saints. “Well, if they pray for my success, maybe I will get back my throne in Delhi. Maybe once again I can be Emperor. I will have to find some Holy men to pray for me.”

He believed that the prayers of Holy men were granted by God, and he was right. So he thought, “If I can find a really Holy man, my wish can be fulfilled! He will pray for my success in getting back my throne. His prayer will be granted. I shall again become Emperor of India! But where to find such a Holy man?”

Some people told him, “Your father met Guru Nanak in Hyderabad. He begged Guru to pray for him. The Guru agreed to pray for your father’s success. His prayer was granted by God.”

“Then,” said Humayan, “I, too, shall see Him. I shall beg Him to pray for me. His prayer will again be granted. I shall get back my throne! But where is He?” And he was told, “Guru Nanak is no more in the world, His light has merged into the Infinite Light. He chose Guru Angad to take his place after Him. Guru Angad lives in a town called Kadur Sahib.”

Hearing this, Humayun got ready to go to Kadur. He took with him a number of things. He wanted to offer them to the Guru as presents.

After a ride, he reached Kadur. He had gone to Guru’s place on horseback, but he did not get down from the horse. When he arrived in the Guru’s presence, he remained sitting on the horse. He thought, “The Guru will get up to meet me.”

At that time, the Guru’s mind was fixed on God. Sikhs were singing hymns, Gurbani. The Guru did not notice Humayun. At this, Humayun became angry. He said to himself, “I am the Emperor! He is a mere Fakeer! He has not stood up to show respect to me. He has paid no heed to me. He has insulted me! I must punish Him.” Thinking this, he drew his sword. He wanted to cut off the Guru’s head with his sword.

The Guru opened His eyes. He looked at Humayun. Then He smiled and said, “Oh Emperor, your sword comes out so readily to kill men of God, but it could do nothing against your enemy, Sher Shah. Where was your sword then?”

Humayun felt ashamed. He put back his sword into it’s sheaf. He got down from the horse. He went near the Guru, and bowed before Him. He begged to Guru’s pardon.

Then he said, “Oh Holy Man of God, pray for me. Pray to God, that I may get back my throne.”

And the Guru replied, “I shall pray for you. You will get back your kingdom after some time, but do not forget God even then and be a just and kind ruler.”

Humayun was pleased. “Oh thank you!” He bowed to the Guru and went away. And he got back his throne after some time.

Humayun and Guru Angad from Sikhnet