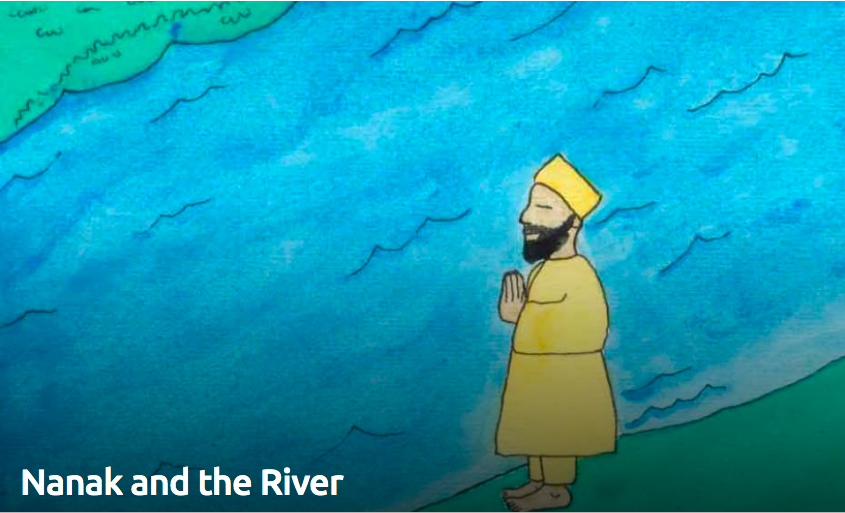 This story is provided courtesy of SikhNet

Early every morning Nanak loved to take a bath in the nearby river. He would clean himself with the cold water and then he would meditate. The time was coming for Nanak’s life to change in a big way. All his life he only cared about God. When he was born, the astrologer predicted that he would be a great man that Hindus and Muslims would both love. Soon it would be Nanak’s time to go out and deliver his destiny.

One day as he was meditating and many kinds of demons came to him and tried to scare him. He was being tested to see if he lived in God or if he was fearful. But Nanak wasn’t scared at all. He calmly watched the demons and felt at peace.

When they couldn’t scare him, the demons tried something else. They decided to offer him lots of riches. They showed him beautiful gold, rubies and jewels of all kinds. They said “There’s nothing wrong, just take it, you deserve it, just take it. It is yours.” He was being tested to see if he would desire money. But Nanak kew what was happening and he could not be tricked. He just smiled and let them keep talking.

Then the demons offered him power, “People will love you, you can make anyone do anything you want, you can do whatever you like, everyone will obey you. You will be like a great king and everyone will worship you. Anything you want will just happen.” Nanak didn’t move. He saw right through them. He knew it was just a trick and he just kept meditating on God.

Next they showed him magic powers. They said, “You could do magic, you could make yourself invisible; you could fly; you could do all kinds of amazing things.” Nanak just laughed and said “Only a fool would take these things.” They offered every wonderful thing in the world but Nanak wasn’t fooled for one second.

The demons went away and Nanak went to bathe in the river. Then . . .  he disappeared and no one saw him. He was gone for a very long time. People started walking up and down the river calling, “Nanak, Nanak where are you? Nanak, Nanak?”

But Nanak was in bliss and was merging with God. The universe revealed all its secrets to him. He drank divine nectar. He heard a voice say, “I am.” It was the voice of God. “You are filled with joy. All who follow you will be happy. Don’t let your mind get dirty from anything in this world. Recite the Naam, share it with others. Be kind to everyone. I am God of the universe and you must now go and teach.” Guru Nanak was completely merged with God.

After three days he came out of the river. People were surprised to see him alive. They thought he had drowned. He looked full of light. and he didn’t talk much. After a long time he finally spoke. He said “There is no Hindu, there is no Muslim. Everyone is the same.”

Then he spoke the Mool Mantra and the rest of Japji Sahib. His work had begun. He, Mardana and Bala started traveling together to teach. Guru Nanak’s wife, Bibi Sulakhani, started crying and said, “Don’t leave me alone.” He touched her on the forehead and her third eye opened. She saw how the world was in pain. She understood what Nanak had to do. She said, “It’s true, you must go. The world is on fire and you must put it out.” So they left to spread the message of the One in everyone.

Listen to this story, Nanak and the River, as told by Gurumeher Kaur, on Sikhnet