The Thirty-seventh Pauree cuts the karma.
It kills the impact of all bad karma. 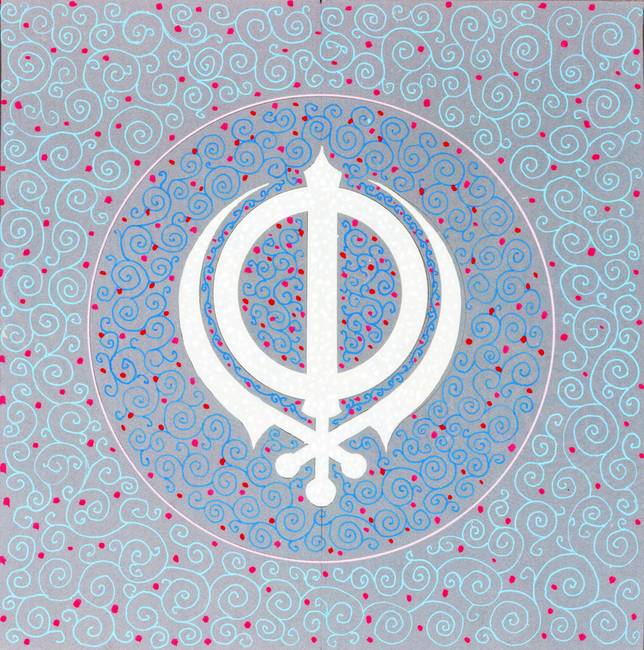 In the 37th pauree, Guru Nanak gives insight into two final realms: Karam Khand, the Realm of Grace; and Sach Khand, the realm of Truth.

Guru Nanak tells us that in the Realm of Grace the Bani is power; nothing else can prevail there. This is a profound statement, meaning that ultimately it is the Bani that takes one through the cycle of birth and death to our final merger in the One. Guru describes the great beauty of this realm and those who dwell in it who are absorbed in the revelation of the Divine. He tells us there are magnificent warriors of great power and courage whose every cell is elevated with divine awareness.

Guru Nanak also illuminates Sach Khand, the ultimate Realm of Truth where Nirankar, the Formless Lord, abides. Guru Nanak speaks to us about Sach Khand from his own state of spiritual ecstasy. During his Jalstambha Samadhi in the waters of the river Kali Bein, the Guru experienced this bliss, this state of knowledge, this deep insight when his being was lit up and the Truth of all existence was revealed to him. In this state of super-consciousness, he was able to return to the world of mere humans and describe it to us.

Guru Nanak tells us that, after having formed the creation, the Lord watches over it from Sach Khand, bestowing Grace and happiness. Sach Khand is the final destination of the atma, the soul, and it is here, freed from the bondage of existence, that the individual soul merges with the Universal Soul as water merges with water.

Guru Nanak assures us that God watches over and contemplates His creation. But more than that, He rejoices upon beholding it. The Divine Lord delights in what He has created, which is all things, including we who read Japji Sahib. God is happy with us and, as Guru advises us in the Mul Mantra, has no enmity toward us. We see the beneficence of the Divine and can take comfort knowing that the universe is created for joy and bliss. 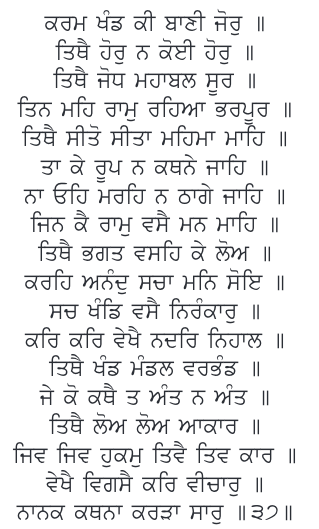 In the Realm of Grace, the Word is power.

No one else dwells there,

except the warriors of great power,

They are totally fulfilled, imbued with the Lord’s Essence.

Myriads of Sitas are there,

cool and calm in their majestic glory.

Their beauty cannot be described.

Neither death nor deception comes to those,

within whose minds the Lord abides.

The devotees of many worlds dwell there.

They celebrate; their minds are imbued with the True Lord.

In the Realm of Truth, the Formless Lord abides.

Having created the creation, He watches over it.

By His Glance of Grace, He bestows happiness.

There are planets, solar systems, and galaxies.

If one speaks of them, there is no limit, no end.

There are worlds upon worlds of His Creation.

As He commands, so they exist.

He watches over all, and contemplating the creation, He rejoices.

O Nanak, to describe this is as hard as steel!

Enjoy these musical versions of of the 37th Pauree courtesy of the SikhNet Gurbani Media Center: